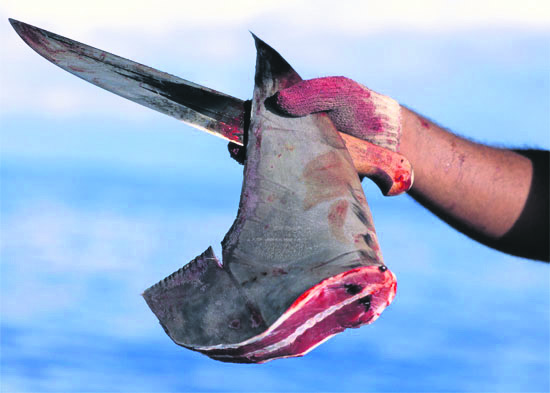 After watching Jaws and hearing about shark attacks on the news, it’s often hard to see the reasoning behind protecting these infamous creatures but at the top of the food chain they’re playing a very important role.

The main reason for shark fishing is for their fins. When these are cut off the shark is often still alive and is then tossed back into the sea, so the fins can be used for soup. The origins of shark fin soup are found in early medieval China where emperors served it as a demonstration of how powerful they were. This is a tradition that carries on to the modern day, as grooms are now expected to provide shark fin soup at Chinese weddings in order to demonstrate their wealth. Shark fin is tasteless, and its inclusion in soup is predominantly symbolic.

Although shark fin soup is supposedly nutritional, in some areas due to the bioaccumulation of mercury pollution in the marine ecosystem fins can contain 4200% the safe concentration of mercury.

Most people consider shark fin soup to be a purely oriental phenomenon but until last year upto 85% of the shark fin trade takes place in California, USA.

Many countries, states and cities around the world now ban the trade and import of shark fin soup, with china saying it will prohibit it being served at government banquets. The EU is looking at closing the legal loopholes that have allowed poachers to go unpunished for finning in EU waters as well.