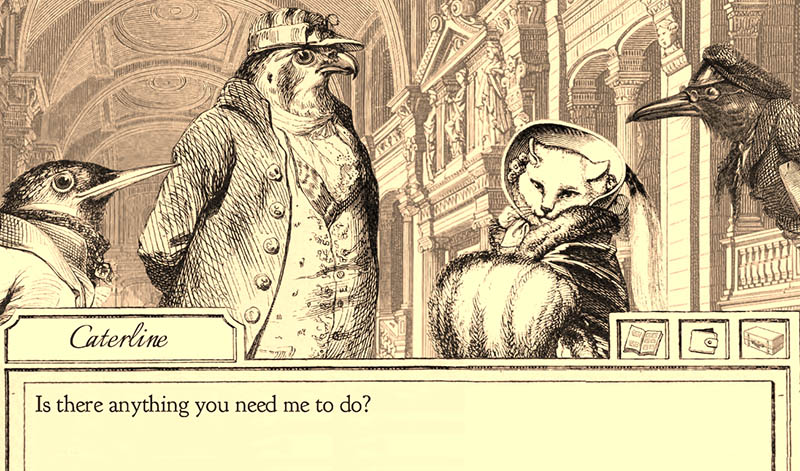 Aviary Attorney had been sitting in my Steam library for a while before I recently decided to load it up and give it a go. I’ve never played any of Capcom’s Ace Attorney games, which Aviary Attorney is inspired by, so I was hesitant to try it, I didn’t really know what to expect. I’m happy to report that I had a fantastic time with it, and wish I hadn’t deliberated so long.

The art in this game is beautiful, with characters being represented through detailed sketches that help to bring out each one’s personality. And there’s a lot of personality, I found myself falling in love with every one of the zany animals that inhabit this world, each with their own quips and quirks.

The world itself is interesting too, as the game is set in a version of 19th Century Paris where anthropomorphic animals live and, in the case of the protagonist Jayjay Falcon, practice law. The setting is charming, and sets up for the high stakes political and ideological themes of the final two acts. The gameplay consists of two main aspects, the investigation portions, and the trials. You’ll receive your case and spend your days prior to the trial exploring relevant locations point and click adventure style, interviewing people to find out what they know, and gathering evidence. Then you take what you’ve found into court. I found both areas of the gameplay to be deeply engaging. There are also three different endings, depending on your actions later in the game, giving some scope for repeat playthroughs, or at the very least going back to key decisions and playing on again from there.

This brings me to my only complaint with Aviary Attorney, its length. I completed the game in just five hours, and while I’ve yet to go back and see the alternate endings, I don’t anticipate that taking longer than an hour or two. I was really in a groove with this game, fully immersed, hanging on every word. And then it ended, and I felt a little empty. While all the relevant plot threads are concluded, there is undoubtedly room for continuation. Of course, this just emphasises how much fun I had with this game, but it’s worth noting that if you’re looking for something to keep you occupied for weeks or months, Aviary Attorney can’t really do that. That said, it’s brevity means that time commitment won’t be an inhibiting factor for trying it out.

All in all, I highly recommend Aviary Attorney, it’s funny at times, tense at others, with a wonderful art style and a brilliant cast of characters, as well as enjoyable gameplay at a relatively affordable price. The most fun I’ve had with five hours in recent memory.