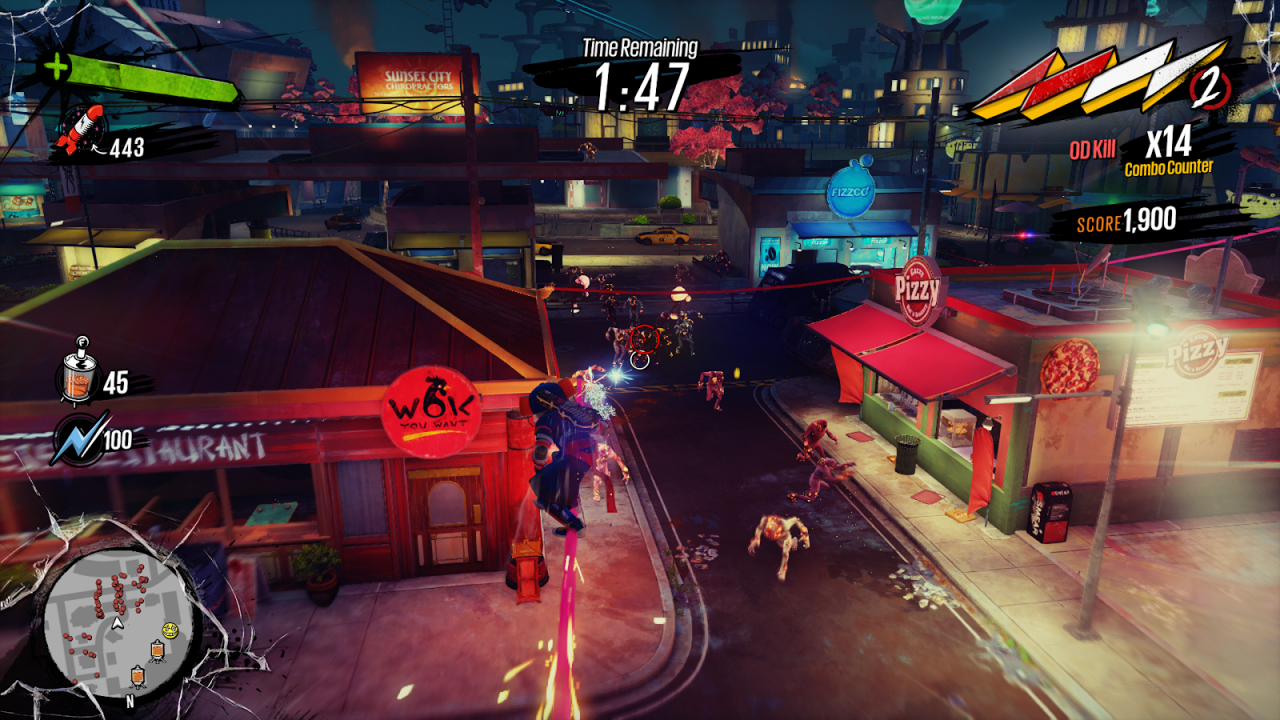 One of the first games I played on the Xbox One back in 2014 was Sunset Overdrive: an open-world third person parkour shooter from the minds of Insomniac Games, who also developed Ratchet & Clank as well as Marvel’s Spider Man for the PS4. As this is one of my favourite games of all time, if not my number one choice, I decided to revisit the game to see if it was as great as I remember. Spoiler alert: it was.

The game puts you in the shoes of an unnamed character working at a concert for a world-famous energy drink company Fizzco for the release of their brand-new energy drink, Overcharge Delirium XT. In a bizarre twist of fate, the energy drink changes consumers into mutants called the OD (Overcharge Drinkers) which are essentially zombies who not only want to eat people but crave more Overcharge. Your character escapes the concert, which serves as a tutorial to get players used to the traversal mechanics, and you are then thrust into the post-apocalyptic world of Sunset City.

The movement system was difficult to get used to at first, as there are different moves you can blend together to create a traversal combo and move effortlessly through Sunset City using telephone wires, bouncy cars, walls to run on and even trees to spring off of. Traversing and utilizing the different parkour moves is essential to do more damage, as the more variety you pack into your traversal the higher your Awesome Meter will fill: this is a lightning bolt-shaped meter in the top right of your HUD that as it fills allows you to do much more damage and also activates your amps.

Amps are another mechanic in this game which allows you to further customise not only your character, but your weapons as well. These are various unique perks that give both useful and over-the-top bonuses that can be combined to make your character even more powerful. The higher your Awesome Meter, the higher the chance of the amp triggering. There are also ‘Overdrives’ which are basic perks that give you bonuses like 40% extra health, or 25% extra damage to OD: these perks were helpful but weren’t as unique or interesting as the variety of amps available to me.

The weapons are bizarre and allow players to show off their personalities and different playstyles depending on their loadout of choice: some of my favourites include the TNTeddy, a rocket launcher that pelts teddy bears strapped to dynamite at your enemies; the High Fidelity which shoots out ricocheting vinyl records capable of decapitation; and the Captain Ahab which shoots out harpoons with Overcharge strapped to them, distracting the OD briefly. There are some weapons that don’t stand out as much however, and like the more lacklustre perks I didn’t find them as enjoyable to use. The character customization is also insanely extensive: you can make your character into anything from a suit-wearing member of high society to a superhero and beyond.

The plot is very entertaining all-around. Sunset Overdrive uses humour frequently but not so much that it feels overused: there are so many puns that those who are fans of ‘dad jokes’ will chuckle with each one they manage to spot. The protagonist breaks the fourth wall occasionally but does it with subtlety, and they poke fun at the absurdity of the game. My favourite use of humour in the game is through the respawn animations when your character dies, and you are thrown back into the world in bizarre ways that give subtle nods to some great pop culture references: Terminator, Back To The Future, Star Trek, etc.

Unfortunately, the multiplayer is one of the games’ shortcomings: Chaos Squad is an 8-man activity that has you go head to head with other players completing monotonous challenges like “kill 5 OD while bouncing” several times before finishing off with a tower defense-style horde mode which is ripped straight from the story mode. The only reason to grind Chaos Squad was for a gas tank launcher called the ProPain which can only be earned through the multiplayer.

Though it was never a major hit and sold a lackluster amount of copies, Sunset Overdrive still holds its number one on my list of favourite video games: it’s fun and vibrant open world and unique traversal system make the game feel fresh and exciting, and it still holds up 5 years after I first picked up my controller and played it.