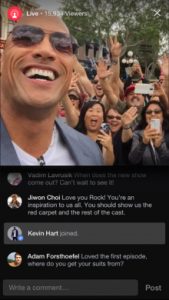 Did you ever use JustinTV or think about starting your own vlog series before noticing that you don’t have the equipment, can’t do fancy editing, or don’t think you will have a big enough audience? Well Facebook has launched a new feature that allows users to live stream in their timeline. This may not be news to some users as the company launched Facebook Live last year, initially only allowing public figures access, but it has now been launched to a much wider audience with the hopes that other users will be able to go live within groups and events.

Whilst there are some gimmicky features, such as filters and the ability to draw on your live video, it is important to bear in mind what repercussions this new move will have on the future of broadcasting with Facebook already paying news publishers to use the live feature.

YouTube is already the world’s number one hub for video streaming, although their live video services have not been as productive as they may have hoped. Facebook seem to have spotted this weakness and are moving in with a newfound priority for video reflected by paying newspapers and digital publishers.

The New York Times, Huffington Post and BuzzFeed have already been identified as some of the publishers being paid, with the Guardian believing that similar arrangements may be in place with Sky. Facebook has also indicated that it was providing financial incentives to celebrities to live stream and had been pursuing sports rights, although it did pass up broadcasting American football games which was subsequently awarded to Twitter.

Facebook seem to be opening this up to professionals by opening up their API to developers in order to integrate with pre-existing systems, this means that you will not only be able to shoot from your smart phone, but you could set up your own studio in your bedroom.

CNN used the service to stream its presidential debate in October and the Guardian has used Facebook Live to report from events such as the junior doctors’ strike. It is not only the main stream news which has been affected by this new feature, my eye was caught by a local story in London concerning a lock in at a library. The ability to live stream from a mobile device allowed the reporter to hand over the camera to some of the participants in the protest to gain an insight into their living conditions and support.

Over the coming months you can expect to notice a video tab within the Facebook app which will contain a way of discovering videos categorised by topic, this will be in addition to the tab already available on their desktop site which contains a live map of current broadcasts, and the ability to discover videos within your own stream.

This technology is bounds ahead of their main competitor in this field, Twitter’s Periscope. Facebook claims that by making videos simpler to create and discover, whilst they are still live videos will generate 10x more comments. Another fundamental aspect of Facebook live is that it addresses some users concerns that they are only seeing the polished highlights of their friend’s lives rather than the raw person they really are.

There is no doubt that the feature will be used for some of the most important parts of people’s lives such as graduation, but there are also bound to be a few messy nights out and days where people just want to rant at the world. Being able to share these moments with select people or groups also allows them to participate in events they wouldn’t otherwise be a part of, such as a sick relative and a wedding, or a child’s first steps.

Unlike Periscope the videos produced through Facebook live can be prominently saved rather than disappearing after 24 hours. This being said Periscope hit 200 million broadcasts last month so Facebook still has a way to go before it catches up although it is starting with a much larger potential user base.

One possibility for rewarding people and corporations with large audiences is a revenue share from video ads viewed after a Live broadcast. If you fancy trying your hand at becoming a broadcaster Facebook has kindly provided some helpful tips for using their service, just please don’t shoot in portrait…