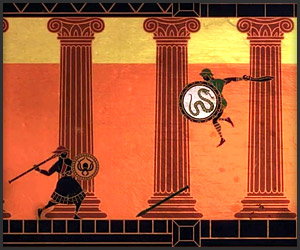 What do you get if you combine Ancient Greek pottery with epic music? Alientrap’s new side-scroller Apotheon. Oh and Disney’s Hercules.

In this Greek Mythology turned on its head, depicted on a pot action-rpg Zeus has been overthrown by his wife, Hera, who now rules Olympus. Her hate for mortals knows no bounds and she aims to destroy us all. But of course there’s always one guy fighting for the survival of the human race; the player character. Being humanity’s last champion will be no easy feat as you journey through the Underworld on your mission to infiltrate Mount Olympus and end Hera’s reign of terror. Simple task, right? Did I mention you only have a sword, a spear and a shield. Oh and you need to take control of the elements before you can save the world.

Apotheon will be released on Steam, the program that most gamers these days are familiar with which allows you to store your game library online and access anywhere, in mid 2013. The game’s design team, consists of just four guys, two of which only do the sound, and so its going to be pretty interesting to see what exactly such a small team have been able to put together.

The thing that draws me to the game the most however, is the design. In an age where video games are really pushing boundaries and creating better effects than a lot of Hollywood movies, its really nice to see a game going back to basics. The days of the side-scroller are back with Apotheon, in true Sonic the Hedgehog simplicity. I’m half convinced the creators were taking a Greek ceramics lesson when they put together the game; its beautiful and establishes the setting with just one glance.

The game will pit you against the hounds of Hell, no end of soldiers and of course the Titans. One of the most exciting features has got to be the effect killing an enemy will have on the screen. Remember you’re essentially a story depicted on a pot and striking down an enemy will cause a crack, albeit briefly, in the ceramic. Cool, huh? Or is that just me?

An open world single-player campaign will dominate the game but with the ever growing demand for multiplayer Alientrap are also promising multiplayer. So far they have announced both deathmatch and team based modes but with the release date still quite far off there’s chance more could be added.

While I’m hardly expecting Apotheon to change my whole perspective on gaming and convert me to a Steam gamer, the design alone has me intrigued. Where big name games are constantly trying to top one another’s latest attempt I feel like Apotheon’s simplicity is something we all need to return to, even if only for a few hours.