This year celebrates the 25th anniversary of one of the gaming world’s most iconic series. The Legend of Zelda continues with the highly-anticipated release of Skyward Sword and, after a quarter of a century, Nintendo have gotten pretty good at making these games evermore timeless and spectacular. Born from his humble, 16-pixel-wide roots in 1986, Link has grown, shrunk and changed style many times. But two things have never: his green tunic and his ability to lead you into extravagant, innovative and sometimes frustratingly difficult worlds.

A prequel to Ocarina of Time, Skyward Sword delves into the origins of many aspects, items and characters from the Zelda series, including the Master Sword, Ganondorf and the famous green tunic. The set of this release starts in Skyloft, a floating safe-haven arisen by an ancient goddess to protect the humans from the evils that ravished the lands below. Naturally, Zelda falls into a predicament, tied by destiny she falls below the clouds and the adventure begins.

Far from a repetitive series that never changes its tune, The Legend of Zelda has always pushed technological boundaries with every game released and Skyward Sword follows this trend with its impressive use of the Motion Plus feature. The developers have managed to create a level of accuracy and precision that no other Wii game has been able to achieve since its release 5 years ago, so much so that almost every enemy you come across in this game requires a specific angle of attack and if you get it wrong, you’ll be punished. No more running around blindly swinging your Wii remote like we all did (admit it) in Twilight Princess, it takes time, thought and accuracy to defeat even the simplest of foes in this adventure. 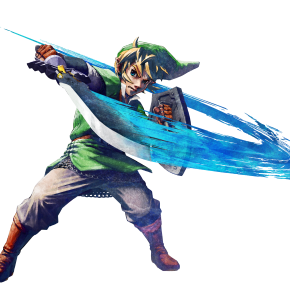 Though the darkly detailed graphics of Twilight Princess were impressive and stunning, what we have with Skyward Sword is somewhat of the middle-ground between Twilight Princess and the cartoon style of Wind Waker. The game has a brighter, fresher feel and it certainly won’t leave your eyes drowning in tears of disappointment.

Once you’ve adjusted to the new improved motion settings and the new artistic approach, you’ll love this game and enjoy the legend better than ever before. The Wii doesn’t have a lot going for it these days, but this addition to the Zelda franchise is certainly a life-line for a console close to the end. Even if you’re not a fan of the series, pick up a Wii remote and embark on this, the greatest game the Wii has to offer and possibly the greatest Zelda game ever made.