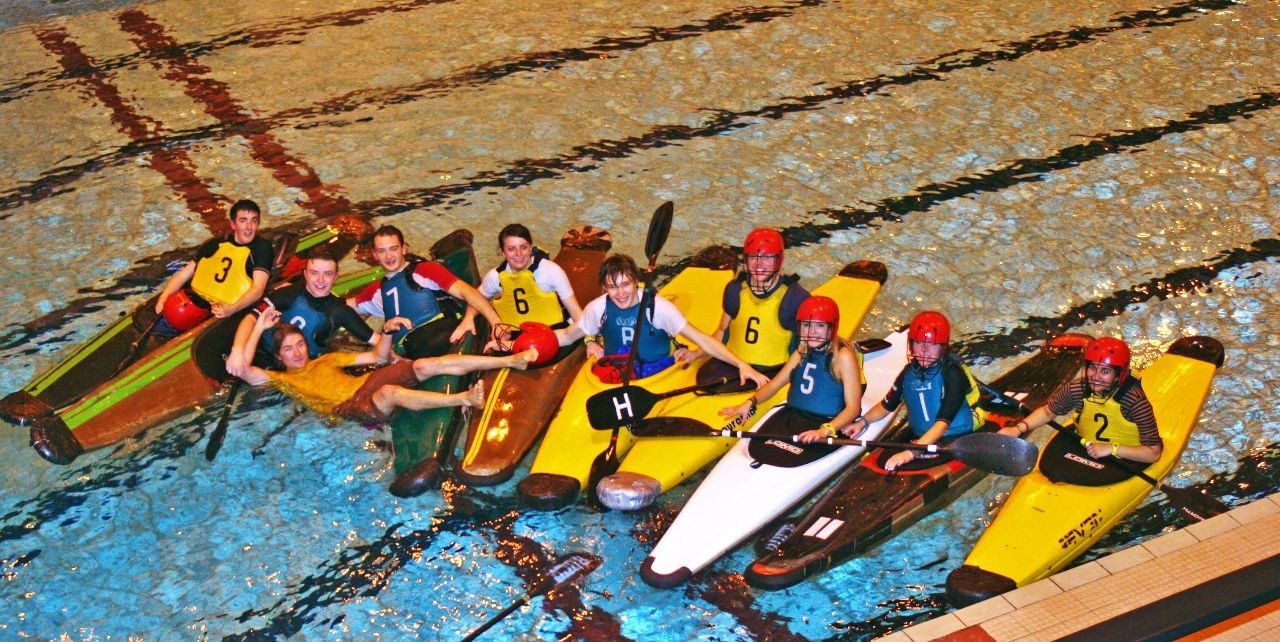 Having told our editor that I was ‘up for anything’ when it came to trying out societies, I soon felt that maybe I’d been a bit too over-enthusiastic when I volunteered to try out Canoe Polo, having no idea whatsoever what it involved and certainly no clue as to even whether you needed to be able to canoe to take part. What followed was many frantic Google searches, all of which led me to be standing in Bangor swimming pool changing rooms wondering whether I had massively overestimated how much my single kayaking experience on holiday had prepared me for this. However, I couldn’t have been more wrong, as this friendly, welcoming club soon put my mind at rest.

After fixing me up with one of the member’s boats (which much to the amusement of the others happened to be the most expensive), the safety briefing ensued before I was helmeted up and helped into the pool. The session started with some simple throwing and catching between the players while I bumped my boat along the sides of the pool (much to the well-concealed distress of the boat’s owner) and frantically worked out just how you are supposed to steer. Next came some T-rescue drilling, which involved one of the players purposefully capsizing themselves and another playing coming to their aid to allow them to ‘push up’ on their boat and right themselves.

With the basics sorted and the warm-up over we started to play a simple game of possession, in which I actually managed to catch the ball. So overwhelmed by this was I that I promptly capsized and, as is typical of me, forgot the safety briefing of ‘keep calm and tap and rub on the bottom of your boat’ or ‘undo the tab on your spray deck’ and instead flailed about underwater vaguely wondering just how long I could hold my breath for. However I needn’t have worried as the others soon came to my assistance and finally remembering to ‘push up’ on their boat, I was righted and the game ensued.

Having capsized once, I was determined not to again and instead got stuck in with the next part of the session – a match between two teams where the aim is to score in the goals at either end of the pool, similar to actual canoe polo matches. Despite my earlier fears and my rather refreshing dip in the pool, I found I actually started to love Canoe Polo and even got a shot at goal (needless to say I missed). At the end of the session, I found myself wanting more of this fun and adrenaline-pumping sport and have decided I am definitely up for another go. If you want to join, the club hold training sessions on Llanberis Lake, Menai Straits and in a pool (no matter the weather) at least twice a week with fitness and circuit training sessions. If you join the team, you also get the chance to play at weekend tournaments in Liverpool, Warwick, Nottingham, Cardiff and BUCS. The club also hold their infamous socials on a Wednesday night and are always keen for new people to join, whether you are experienced or have never canoed in your life and I for one would definitely recommend it.