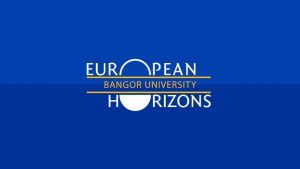 Brexit is planned for October 31 st . Considering the threat of a no deal and the political turmoil
happening in Westminster, the future of the UK has never been so unclear. But one thing is certain:
whether you agree with Brexit or not, the UK will always maintain relationships with the European
Union.
We decided to introduce European Horizons (EuH) in Bangor in order to give students keys to
understand the new issues the UK is facing and preserve our interest in the European Union. Created
in Yale in 2013 and now established in Europe, in the United States and in Asia, EuH is a global,
student-led policy incubator whose mission is to give young people a voice in shaping the future of
Europe and of transatlantic relations.

What will the future commercial relations between the UK and the EU be like? What environment
policies will be implemented at the scale of the UK and the EU? What will the consequences of Brexit
be on judicial cooperation regarding criminal matters? If you want to be given keys to answer those
questions, and learn more about Europe in general, join us! EuH in Bangor will conduct independent
research through publications, hold discussion sessions and organize speaker events. We welcome
everybody interested in those issues, whether you are already aware of them or not, by engaging in
critical thinking and enriching discussion and debate.
Also, our annual mission is to undertake collaboratively-designed projects with a network of
university chapters across the United Kingdom: Cambridge, London School of Economics, King’s
College London, University College of Dublin, University of St Andrews, University of Bath,
University of Bristol… Therefore, by joining EuH in Bangor, you will have the change to exchange
with students for all over the UK in Europe.
Being part of our chapter is also an opportunity to shape the future of Europe and transatlantic
relations.
As a way of bringing students from around the world together, both in the US at the annual European
Student Conference (ESC) at Yale University, and in the EU, at the Digital Economy Youth Summit
(DEYS), European Horizons creates a platform for this political, economic, and social exchanges
between young minds.
One of the biggest opportunities for you is the participation in the annual conference DEYS held at the
College of Europe in Bruges, Belgium, where EuH brings together selected students and industry
experts, policymakers and academics. Based on principles such as bridging the gap between youth

and EU policy and elaborating innovative policy visions, DEYS remains one of the biggest and most
prestigious European youth forums.
Whether you want to be part of this network, are willing to debate and be given a voice, or are only
interested in learning more about the future of the UK, European Horizons is for you!