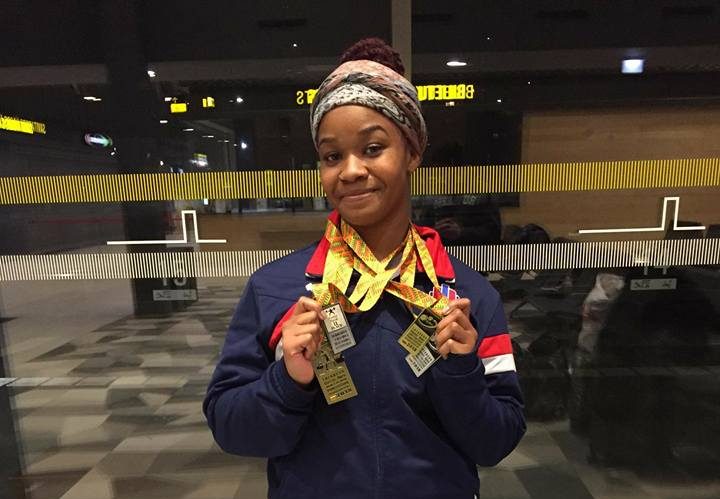 The competition could not have been closer and it all literally came down to the very last lift. Chrystal, being the warrior she is gave it everything she possible could, with the heart of a lion and amazing support, she used every last ounce of energy and strength she had left to match her own personal best deadlift to win overall by just 2.5kg.

Williams came away with some new necklaces with Silver medals in both squat and bench and Gold in deadlift and overall. She didn’t stopping there as she also broke her own record to set a new European record with her total at 495kg.

“This was by far one of the most dramatic competition I has witnessed. I’m extremely proud of my achievement as I’ve never been that tied to another lifter where one lift could mean the difference between gold and silver. Which made it even more intense and amazing at the same time,” said Chrystal.

Chrystal hasn’t always been a European champion or second best lifter in the world. When she first begun university she had never been to the gym doing her three favourite lifts.

Her friends from American Football and her coach Adam Chamberlain convinced her to go along to the gym to try it out, straight away her teammates and coach saw that she was naturally gifted with strength. This is where Chrystal long journey to victory started.

When asked what drives her to spend hours in the gym, she responded:

“I think the drive to win and compete comes from the hours/days/weeks/months of training that we put in.”

“Being committed to the gym and workouts as well as watching what we eat to be an ideal weight for the weight class takes up a lot of time, effort and money. So to get personal bests or win me guess just shows that all the hard work has been purposeful and fruitful.”

Bangor University has been a big part of Chrystal’s lifting journey as without Bangor University facilities her training wouldn’t have happened – they offered her great equipment and space for herself, as well as her club that she started up herself to help other experience lifting.

The life of a powerlifter is not just a hobby, it is a way of living and Chrystal has took this life on. She adapted her life to a powerlifting life to be the best she could be.

“It’s important to me because it highlights not just physical strength but mental strength too which can be used in other areas of life,” said Williams.

“Sometimes training will just be hard but it won’t last forever so fight through it. I don’t ever want it to feel like it is a chore or lose the enjoyment of it.”

Her words of advice would be to try as many sports as you can whilst at Bangor. Sports don’t always have to be super competitive or serious, just always allow yourself to enjoy it and maybe you will reach new levels that you didn’t think you’d reach.