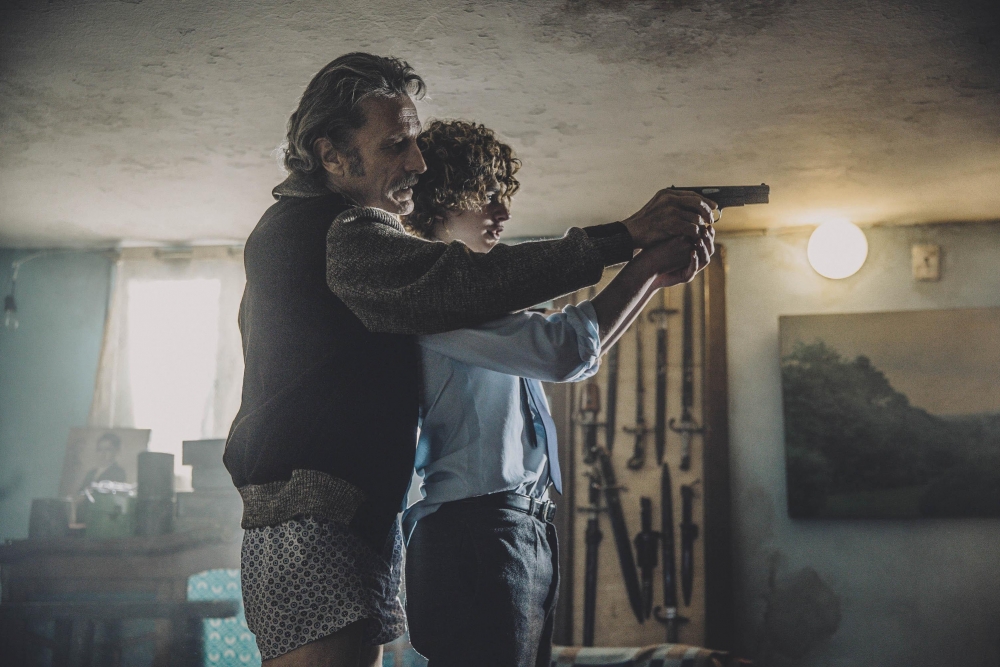 A bit Baby Driver, a bit A Clockwork Orange in the protagonist, a little bit Scorsese, smatterings of Tarantino, but make no mistake, Luis Ortega’s The Angel is an absolute breath of fresh air. Stylish, slick, and with a soundtrack to die for – almost literally – crime never looked so cool.

Newcomer Lorenzo Ferro takes on the role of “The Angel” – Carlos Robledo Puch – the real-life teenage serial killer, rapist, thief, and arsonist who sent shockwaves around the world 40 years ago, a real life Dorian Gray if ever there were one and all too frighteningly real. Here, Ortega reduces the age to high-schooler and inverted commas “waters down” the true extent of Puch’s hideosity somewhat, opting to let the surrealism of his vision mythologise his protagonist to a level where entertainment and enjoyment is in line with the wacky hyper violence popularised by Tarantino and his peers.

A young thief, Carlos believes himself to be a ‘spy from God’, breaking and entering whomever’s households he pleases just because he can, relishing in the act far more than the ‘rewards’ he reaps from committing them. He gives away the stuff he steals to gain people’s respect and approval, and he’s always there with a kiss for his mama and a ditty to play on the piano. Were it not for his illegal pastime, he would simply be a joyous protagonist, a latterday James Dean or a pre-emptive Harry Styles-alike with titularly evocative angelic features and a charming manner. What is most perplexing is that, even as he descends deeper into criminality and commits ever-sickening crimes, his youthful good looks and naive manner, the childish reckless abandon he exudes, well they render him hard to detest and ultimately even harder to resist.

There is an uncomfortable anti-heroism that echoes Alex DeLarge, and Ferro draws a similar expression of ecstasy in violence and crime to the chillingly charming Malcolm McDowell who brought the literary masterpiece A Clockwork Orange to life. Ferro is absolutely mesmeric in the role, getting down to the film’s funky soundtrack and flirting dangerously with his take-or-leave girlfriend and his partner in crime Ramon (Chino Darín); there is a palpable sexual tension between Carlos and Ramon that sizzles throughout the film and it is very strongly suggested that part of Puch’s motivations for his excessive violence and aggrandised robberies is a will to impress and arouse his partner, to show him what he’s got to give and what Ramon could take if he wanted. A dream-like sequence sees the pair dancing on a TV set, Puch picturing himself with Ramon in the frame, and in other moments the pair come close enough to kiss before their sensibilities break their intimacy – their homosexuality is dangerous, incendiary in the 70s societal ideologies of Argentina, allegorised by Ortega through the extremities carried out upon other by the pair and their ultimate self-destruction.

The editing is as precise and impressive as Puch’s talent with a pistol and a break-in, and just as devastating, a shot reverse-shot of a blowtorch hole in rapid succession preempts a gunshot to the head and, when working with such gorgeously grandiose and colourful cinematography and sets the film is truly a work of art in its conception. The growing presence of red in the film from the opening break-in to Carlos’ red jumper in which he is incarcerated in show his transition from petty theft to borderline satanic sadism, his angelic qualities lost in the white boxers he wears that eventually change for red, his increasingly dark and alarmingly hued wardrobe externalising his degeneration. It’s little details like these, little signifiers, sexualised and sensualised and centred in the core design of the film that show Ortega’s attention to detail and flair for the visual art of film.

Moreover, the soundtrack is energetic and pulsating and incredibly effective, with an Argentinian rendition of The Animals’ House of the Rising Sun playing in its entirety through sumptuous shots of a burning car and a catastrophic cut to a heart-stopping moment of pure madness, etching the extraordinary sequence in the mind and leaving it there to fester long after the film’s madcap conclusion. The grooves and classic rock tracks that play through the heavy action sequences are evocative of the likes of Baby Driver and, again, Tarantino, but are unique and represent a distinct South American musical heritage and scene, elevating the visual spectacle and assaulting the senses in the best possible way. The subversive poetry of Puch’s movements, the lyricism of the way he executes his ‘jobs’, choreographed with such warped beauty – a beauty that is to be found in the symmetry of a double murder and a fatal shot to the centre of an old man’s chest in synchronicity with his light switch – is captured superbly in the tracks that foster their enaction.

All in all, the dichotomy of aesthetic good and inner evil that bewildered the masses when Puch was jailed in real-life is brought to the screen here with generous helpings of artistic license which, contrary to many dramatisations, serves to illuminate rather than mystify the subject matter further. The Dorian Grayish Carlos Robledo Puch was morally decaying from the inside out, clutching onto his angelic demeanour to validate and veil his debauched predilections, expelling in his crimes’ grim canvas the inner monster that constantly threatened to break out and crack the facade. Ortega shows us the aesthetic ‘beauty’ of Puch and a stylised slew of sickening acts whilst juxtaposing that with those who surrounded him and suffered for his deeds, the mother at home who could see beneath the exterior and knew the blackened soul of her son, and the absolute lack of understanding of his motives even from those he believed himself to work with. “The Angel” starts with joyous, care-free revelry from a troubled youth who still has a chance, and ends with the realisation that he will forever be damned for the sins he has committed, and that he has been expelled from every place he ever sought solitude and escape.

The rise and the fall is as epically pursued and potently realised as that of the original broken angel Lucifer, and this too is truly a devilish delight.

The Angel currently has no planned UK release, but hopefully will reach our shores via on-demand distribution soon.

Check out the Spanish trailer for the film below.