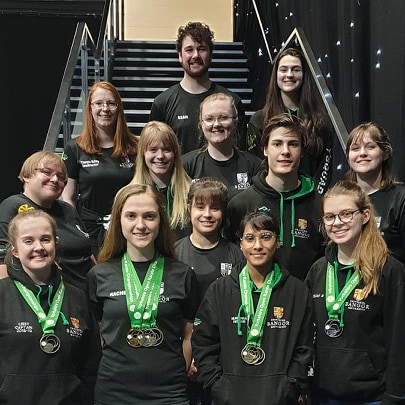 On Sunday 26th January 2020, the Bangor Karate Union (BKU) travelled down to Barnsley to compete in the Yorkshire Open. This was the club’s third year competing in the competition.
The competition began with our pair’s competitors. After gaining a gold medal in the Welsh Open in November, the expectations were high for the pair. Hannah and Rachel progressed through to the semi-finals, beating black belt pairs along the way before eventually being knocked out by the England squad pair to gain the first medal of the day; bronze.
The day moved on to the individual categories. Our advanced competitors were able to achieve some personal bests in the competition, with Holly placing the highest amongst the black belts in the club, coming Top 8.
Our final individual category was for our novices. The category concluded in all BKU semi-finals. The competition was tight. Our captain Libby gained the first bronze medal spot, before eventually being joined by Hannah who managed to gain her medal through repechage after being knocked out in the quarter-finals by a finalist, placing Jodie in 5th; a great result for her first competition with the club. The final was intense between Ebony, a beginner to competing, and Rachel, a seasoned competitor. After they both performed, the flags went up to declare Rachel the winner, placing Ebony in 2nd place, an outstanding result for only her second competition.
Kumite concluded the day. Unfortunately, our male competitor was knocked out in the Top 16, leaving only Rachel left with a chance to complete her hat-trick. She managed to hold onto the final, but just missed out on the gold by one point. She completed her hat-trick of medals for the day in all colours, bronze, silver and gold. This places Rachel in the highest competing position in the club with 11 medals earned in only 18months and 6 competitions attended.
As always, the BKU instructors and coaches are immensely proud of all of their competitors and everything they continue to achieve. 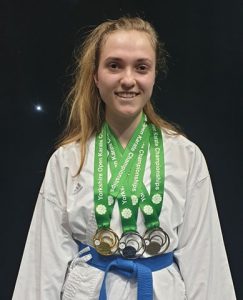