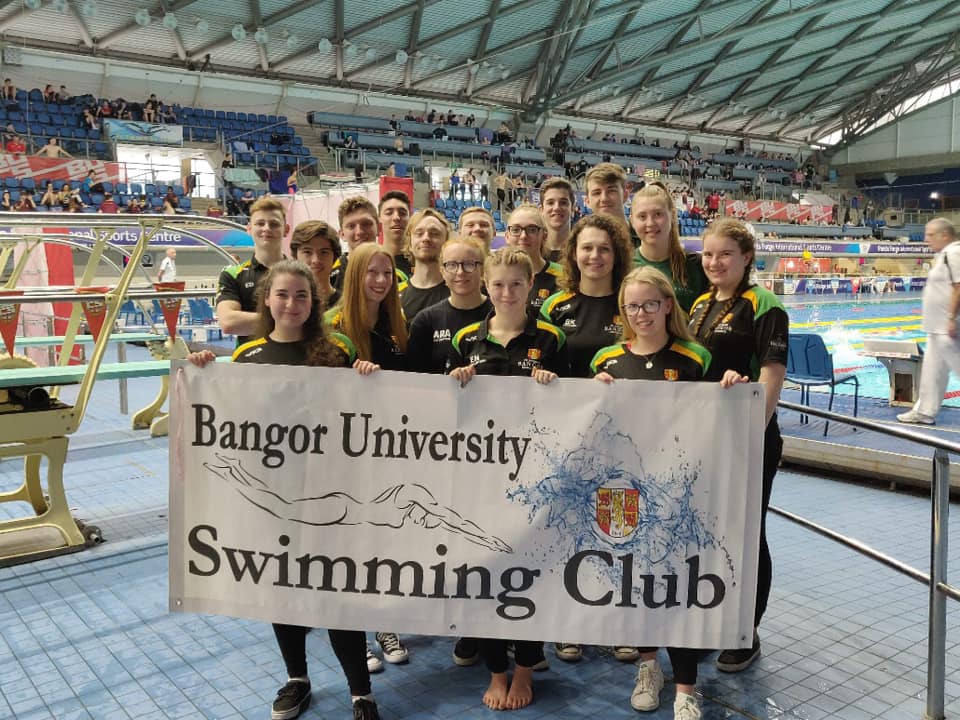 On the weekend of the 15th-17th February, Bangor University Swimming Club sent a team of 17 swimmers over to Ponds Forge in Sheffield for the National Long Course Championships. The competition is of the highest calibre where the best swimmers across the country compete to achieve the fastest times possible, even including an appearance from Adam Peaty!

After a long journey to Sheffield, the team arrived at the pool ready for the first day of racing. The women were up first with the 400m Freestyle relay and leading the team off was Jessica Sutton who stormed to a Bangor Uni club record time of 1.02.01! This was followed by some great swims from Bethany Kiamil, Emma Nelson and Amber Allford. Together they achieved a time of 4.29.05, smashing another Uni club record by 13 seconds! The women finished 32nd out of 42 teams.

Next up were the men’s freestyle relay. This was lead off by Captain John McKavett who achieved a time of 58.62 which was another club record time! The following swimmers produced some solid swims to achieve a time of 4.10.13. This was six seconds faster than the entry time!

The day was off to a good start with both women, Bethany Kiamil and Emma Nelson, achieving PBs in the 200m Freestyle and Emma also obtained the club record for this event. The next record broken was by fresher Megan Cook, who managed to knock 9 seconds off of the 100m Butterfly club record! They didn’t have to wait long for the next record as John McKavett got another one in the men’s 100m Butterfly. With the 200m Backstroke next it was another record for Jessica Sutton. Dante Matellini was the second individual fresher to get a club record, this time in the 200m breaststroke. To round the day off the women’s medley relay, including Charlotte Waddington, Natasha Proffitt, Megan Cook and Maria Taggart, got another club record, beating the old one by 10 seconds, meaning both women’s relays had achieved club records.

Although it was another early morning and everyone was tired, the team were still supportive and loudly cheering each other on. The first record of the day came from another fresher, Michael Doyle, in the 200 Individual Medley. The last record of the weekend again came from Jessica Sutton in the 100m Backstroke, beating her own old time to get a hat trick of records and finishing 14th out of 58 swimmers!

After a short and intense build-up of training to nationals, the whole team performed really well, and as always the work ethic and atmosphere was and electric, with everyone getting involved. Well done to all and bring on the Manchester charity gala in March.