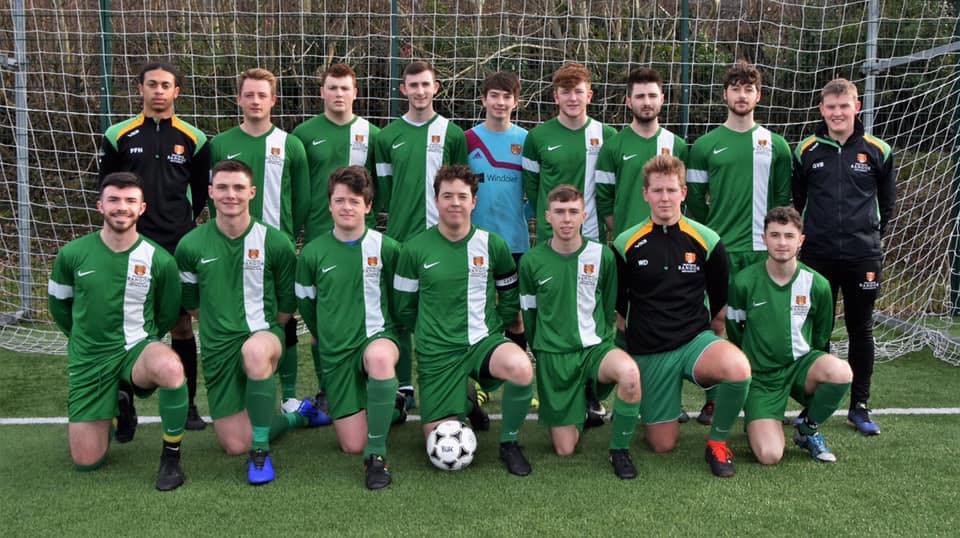 After last week’s game against Salford was called off due to snow, the Second Team wanted to get back to winning ways with only our 3rd home game of the season against Cumbria.

It was a nerving start to the game as neither team could keep hold of the ball, leading to an early injury to Cumbrias’ captain. But after 15 mins, Bangor started to find their feet and keep possession for periods of the game. On 25 mins, the chances started to come. A corner coming in from the left hand side was met by Dion at the front post, which forced their keeper to make the first save of the game. Minutes later, a through ball was threaded through by our midfield to our striker Toby, which put him one on one with the goalkeeper. However, Cumbrias’ keeper stood his ground and delayed his reactions, saving the shot and putting it out for a corner.

Two minutes later, our central midfielder Joe passed the ball to Kyle, who miss controlled it, subsequently putting Toby through on goal. He looked like he was in an offside position, but the linesman kept his flag down and he calmly put the ball into the net to make it 1-0 BUFC. With half time getting nearer, a weak pass was intercepted by their very active forward leaving him one on one with our goalkeeper Mike, who forced the forward to sail over the bar. However, two minutes before the break, the ball was played to Bangor central midfielder Tudur, who passed to our overlapping fullback Harrison, crossing it in from 30 yards, luckily looping over the goalkeeper and into the back of the net.

The second half started with both teams feeling like they had a point to prove, as Cumbria started to keep possession and get chances on goal. However, a tackle in the middle of the field put us through on goal, leading to a corner.

After the first attempt was cleared, the second was perfect put in by Joe H, with Danny meeting the cross to score his third goal in two games for BUFC 3-0.

This seemed to be a big boost for Bangor, but Cumbria came back with a quick response. A clumsy foul by Dion on the edge of the area led to a brilliantly executed freekick, but it wasn’t good enough to out smart goalkeeper Mike, who made an unbelievably good save to keep it 3-0. Minutes later, Cumbria were through on goal and squeezed it past Mike to make it 3-1

Bangor started to recontroll the game again, passing the ball along the back and finding spaces in the Cumbria defence. However, an over weighted ball by the Cumbria midfield was there for Mike to pick up, but with Dion shielding the attacking striker, a mix up between them allowed their forward to nip the ball around Mike and score again to make it 3-2; game on! However, the game was put to bed when Toby picked up a loose ball from their defence, who sent their CB the wrong way and slotted the ball into the corner of the goal, netting his second of the game and making it 4-2.

Full time and another important 3 points for Bangor as they now sit at the top of the table by a point with 4 games remaining.