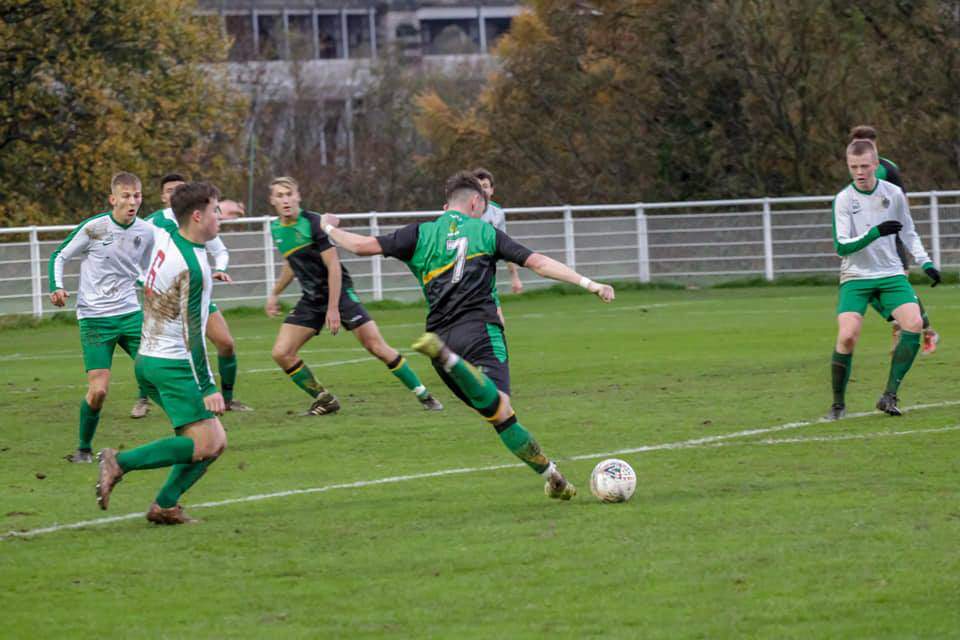 Bangor firsts welcomed Leeds to Treborth on a wet, cold day. Looking to continue their unbeaten start to the season and progress to the last 16 of the cup. Despite the fact that Bangor were favourites, conditions could’ve been a leveller, so the start would be vital in establishing a foothold. As they have in many of the games this season, Bangor started brilliantly. A break down the left saw Aidan get into the box, his low cross went all the way through to the back post where Harry was on hand to score yet again. Making it 1-0 to Bangor. The pitch was cutting up already and made ball playing difficult, but Bangor continued to go forward and it was soon 2-0. As Aidan’s header from James’ corner was tipped onto the bar, and although Richard couldn’t poke the rebound home, centre back Josh was on hand to score his third of the season. At this point Leeds got a foothold in the game themselves and started to have more possession, despite the awful playing conditions. The Bangor defence stood firm to weather and an extended period of pressure, but as Bangor were unable to get out, Leeds scored as a corner from the right swung over everyone and into the net for 2-1. Leeds kept up the pressure but the back four of Bangor defended resolutely and just before half time, Harry picked up the ball in the Bangor half before driving forward past several players and into the Leeds box where he was fouled. He stepped up himself and made no mistake from the spot to make it 3-1 and relieve some of the pressure on the Bangor team.

In the second half, the pitch was really hard to play on, and an early Leeds goal to make the score 3-2 really heaped the pressure back on Bangor as they struggled to get the ball into the front three. However, the Bangor midfield three were superb, breaking everything down and playing with real quality when they could. Chris came in for Prince and Liam replaced Shaun to give Bangor fresh legs on the heavy turf, and these changes helped Bangor get a little more of the ball as they combatted Leeds 3 back formation. With around twenty minutes left to play, a brilliant ball from Richard found Liam inside the left channel. Although his shot was saved, Aidan followed up and struck it into the roof of the net to give Bangor their two-goal lead back. Again, Leeds came forward and Mark made a few very good saves in a five-minute period to keep it at 4-2, before the keepers long throw released Liam and he was too skilful for the defender as he finished to make it 5-2. After this the steam came out of the Leeds attacks and after Harry hit the bar late on, Bangor saw the game out to progress to the next round.