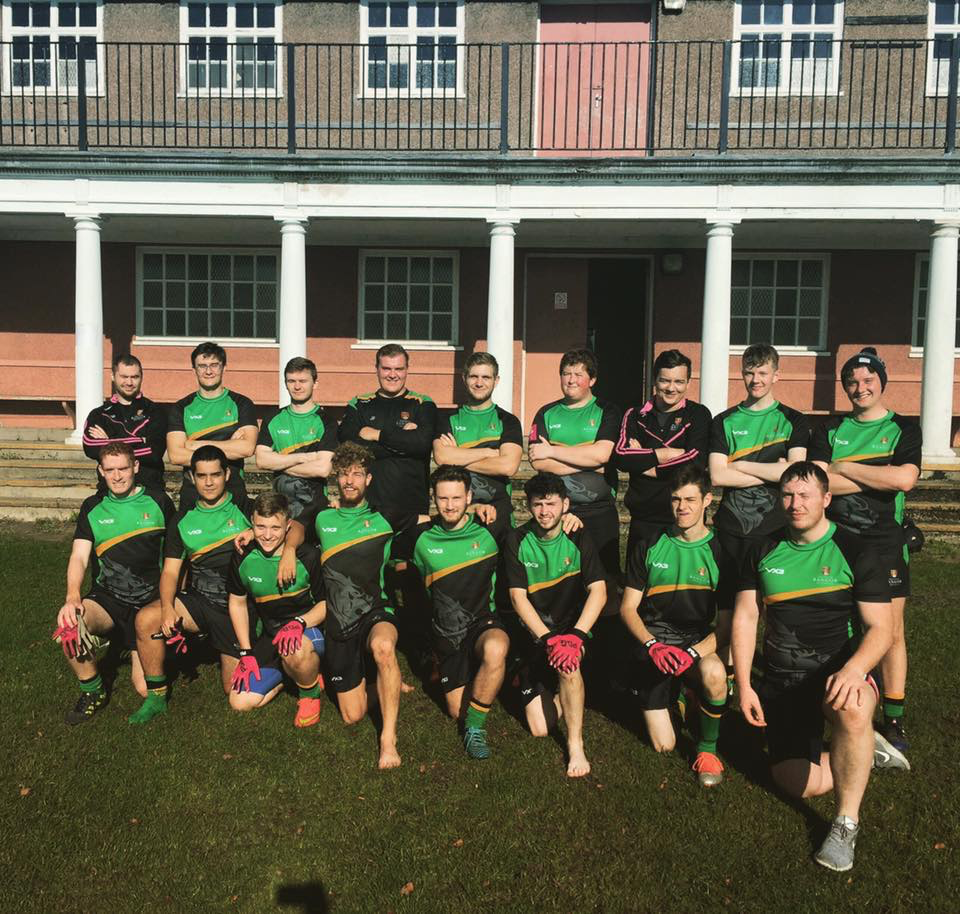 For some of the lads it was an early start, with the bus pulling up at Uno at 7am, a few light heads to say the least!

For the rest of them, they set off at 9 for Sale, Manchester for the first event of the year, 7-a-sides.

First up was John Moore’s which was always going to be a tough battle with a lot of Irish playing their education trade in Liverpool. But it was a very good start from the Bangor lads, of which 7 players didn’t play before, keeping Liverpool to 1 point in the first with wonderful displays from all players. The wheels came off though in the second half with most of the lads not being able to keep up the intensity of their first competitive game of Gaelic leaving John Moore’s running out 4-2 to 0-1 winners.

It was again another tough game on the cards for the North Wales team with them facing Manchester Met this time. But this was to be the best game that Bangor have played in the past few years, and possibly the best first half performance since their Championship victory in 2016. It started well right from the off with a goal coming inside the first 15 seconds leaving Bangor well on their way. That was added to with another goal and a point to leave the scores 2-1 to 0-0 at half time. Second Half against the wind was more of the same and Bangor added another 1-1 to put the game to bed and add 2 points to the tournament table after two games.

Next up was St Lawrence’s, one of the club teams that had entered the tournament. The lads were slightly confident they could put it up to their opponents but little did they think that they would be within a whisker of beating them by the end. Bangor started were they had finished off against Manchester Met with them taking a 1-3 to 0-0 into the half time break and looking good for a victory. But some sloppy defending at the start of the second half led to two goals leaving Lawrence’s in front by 2 points. Although it was to be a moment of magic which left Bangor a point ahead, with Brad Wilson ripping up the script of traditional Gaelic Football by executing a bicycle kick as the ball was played over to leave a rapturous applause breaking out on the sideline. Although this wasn’t the final twist in the game. St Lawrence’s were looking to get a leveller and they got their chance when a questionable refereeing decision, which seemed to go against Bangor all day, gave St Lawrence’s a free to level the game up and leave Bangor out of the qualifying spaces. Final score 2-3 to 2-3

The final game of the day was a dead rubber match versus a very strong St Brendans side where we made sure all our newbies got full game time and it was very beneficial for them especially to get used to the speed of the game.

All in all a very positive day out, which allowed 7 new players a chance to taste Gaelic Football at a demanding level but also gave the experienced 5 some match action before the league opener v Uni of Liverpool next Saturday.