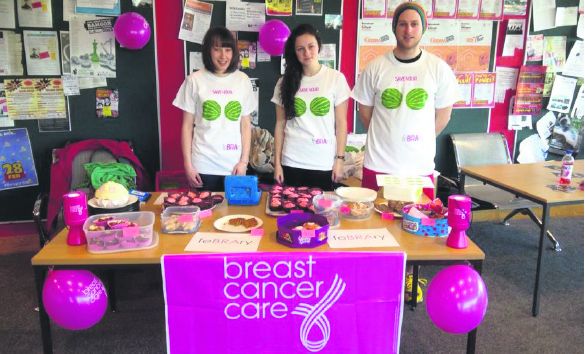 For the third year running February became FeBRAry and once again the Lacrosse Club stepped up to play their part in raising lots of money for Breast Cancer Care…
We were all very proud of a member of our women’s team, Kara Wills, who was brave enough to make a sky-dive back in 2012. Thanks to her determined fundraising, she was able to kick-start our club efforts with an amazing contribution of £260!
This fantastic achievement motivated the whole club to get involved in our FeBRAry cake sale. We are very grateful to all those who bought, baked and donated on the day… not to mention for the great comments we received about the standard of our cakes! This event raised a further £139.43 and allowed us to publicise the biggest event of FeBRAry: the AU night strip.
The AU night saw members of BULC turn out in force to front the event. At half past twelve, the whole of Academi was treated to the sight of ten of Lacrosse’s bravest boys performing a strip that many described as the best yet! Men’s team member, Joe Williams, showed his true dedication to the cause… revealing the Breast Cancer Care ribbon waxed onto his chest! Thanks to the efforts of the boys and the rest of the club who volunteered throughout the evening collecting donations we were able to raise a further £211, not to mention helping the AU to collect a fantastic amount on the door and through T-shirt sales
As a club we would like to thank everyone who got involved with our fundraising efforts for FeBRAry. We are extremely proud of what we achieved as a club and look forward to hearing the final FeBRAry total from the AU.