One giant leap for Trampoline Club 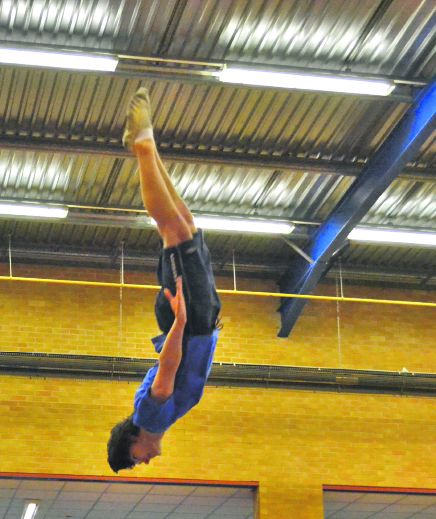 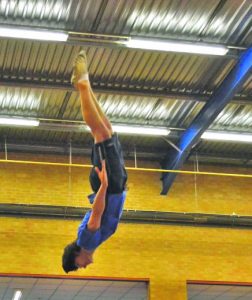 On Saturday 2nd March, members of Bangor University Trampoline staged a 12 hour Bounce-a-thon in Maes Glas hall. The most dedicated members had already spent 3 hours the previous day doing a normal session. The hope was to help the club gather some funding for competitions and the pricey coaching that they require.
As well as coaching and captaining the University Trampoline club, Becky is also the coach of local youth Trampoline group, the Bangaroos. Initially the club was just focused around the university, however the extension into the community shows the club’s initiative to promote the sport and share their knowledge with the people of Bangor. In fact during the bounce-a-thon, we saw a Bangaroo presence.

SU President Antony Butcher who was at the Bounce-a-thon said, “I had an amazing time learning how to trampoline, and everyone was really friendly and welcoming. It was also great to see members of the local community getting involved, breaking down the barriers between town and gown.”

Currently the club has two trained coaches, which mean that one single session can hold up to 32 people. However the club need to get their coaches trained up more, and captain Becky Jantschenko is already embarking on the next course which will cost in excess of £400. On top of this, it also costs £75 a year to insure the coaches; anotherexpenditure that has to be paid for by the individual as the AU cannot fund the rapid turnover in coaches.

Shaun Preston , Competition Secretary said “An event like this was the only way we could raise the money needed to allow our members to compete in external competitions. Thanks to our current members, Bangoroos TC and the local community; we have raised more than £600 and will be sending 9 competitors to represent Bangor University at the Irish Student Trampoline Open in April.”
Unfortunately this year an administrative error meant that Bangor’s Trampoline club were unable to attend their BUCS fixture in late 2012, however they hope that in 2013 they will be able to compete in BUCS and non-BUCS events. They had 3 goals at the start of the year: compete more, be more social, and have more coaches. They could very well be on track to reaching those goals.

During the bounce-a-thon, you could see the light hearted yet also serious competitive nature of the club. As well as fun and games (and skipping on the trampoline) the members took the chance to do 12 hours of training; they’re that dedicated.

The Bangor University Trampoline club meets twice a week, on Friday 18:30 – 20:30 and Sunday 14:30 – 17:30 at Maes Glas. They welcome all forms of ability and can be found at trampoline@bangorstudents.com .