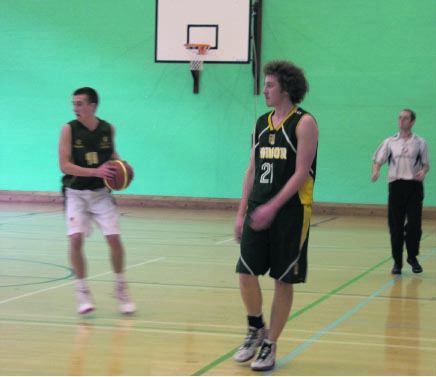 After a forty minute chase up the leaderboard by Aberystwyth, Bangor emerged victorious with a 49-46 result. As described by

Bangor’s Captain Matthew Bigley, the Badgers’ team performance was “nothing short of heroic”, with each of the players “diving for every loose ball.” The tension was high throughout the game, with the constant fast pace contributing to a neck-to-neck contest. The atmosphere and support from the crowd for both Aberystwyth and Bangor was powerful, with everyone engaging with the game and spurring on the players to win.
In the first quarter, Bangor gained an immediate lead of 18-10, dominating the home team. Despite a good performance from Aber, who put in a solid effort and almost managed to match Bangor’s score, they were unable to meet the standard that was set by the Badgers. The eventual score was incredibly close, with the last six seconds being absolutely crucial for the success of our team. The anticipation amongst the supporters in the Sports Hall was high, due to there being a mere 3 points between the two teams by the end of the game. However, Bangor pulled through with consistant free-throws and baskets, proving their ability to perform to a high standard despite the pressure of the situation.
Altogether, the determination from the Bangor team to beat their main rival was evident, with Bigley acknowledging that they were “the strongest team we have come across this year, very physical and tough to play against.” Players gave their all on the court, with the amount of effort and passion they being undoubtable to all those lucky enough to observe such a performance.
Personified by the Captain, the team’s performance and the atmosphere in the Sports Hall was amplified by the pressure and excitement evoked by Varsity, with the games always being hard-fought and considered as a battle between the two Universities to come out on top. The performance given by our Men’s Basketball team was exceptional, completely reflecting their pride at the chance to represent Bangor University.