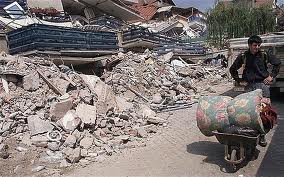 Nine people including women and children have so far been announced dead following a factory’s collapse in Lahore, eastern Pakistan; dozens of people were thought to have been trapped in the accident. Residents have reported that underage workers were employed in the plant that collapsed amidst a blast; caused by a gas leak. Early reports indicate that the factory may have housed a factory for illegal veterinary medication. The accident is said to have happened in the early hours of the morning as workers were arriving and could have been much worse had it happened later in the day.

The building is said to have caved in after several gas cylinders inside the building exploded. Reuters reported that the local authorities were having difficulties transporting machinery to the area in order to clear the debris due to the narrow streets in the residential area in which the factory was located. Rescuers attempted to clear the area by hand however this will be a long and laborious clean up, hopefully the rescuers can find survivors amidst the rubble and will be able to limit the loss of life.