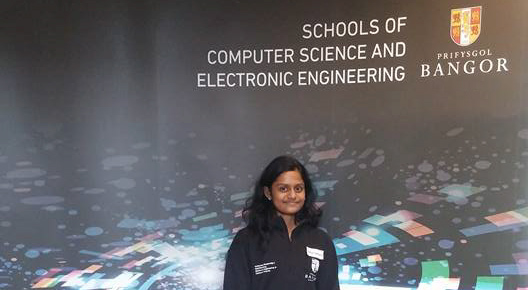 A successful third year Bangor University student has been released hours before she was due to be deported following a failed asylum application. Shiromini Satkunarajah and her mother Roshani were released from the Yarl’s Wood Detention Centre, Bedfordshire, where they have been held since Thursday after being arrested at Bangor Police station.

This decision follows days of campaigning against the deportation order from the local MP Hywel Williams, Bangor University, Undeb Bangor and a massive social media campaign that saw over 80,000 people sign a change.org petition. It is believed that the Bishops of London and Bangor were among the many to sign for her release.

The news was announced by Plaid Cymru MP Hywel Williams, who had been busy in the Houses of Parliament trying to raise the case with the Immigration Minister Robert Goodwill MP. After multiple failed attempts to speak to the Minister, Hywel Williams had to raise a point of order in the house to finally make a breakthrough. The Immigration Minister then finally met Mr Williams and informed him that Shiromini and her mother would be released immediately.

Shiromini and her mother were due to board a Qatar Airways flight to Sri Lanka from Manchester Airport 9am Tuesday 28th February. Miss Satkunarajah and her mother came to the UK in 2009, fleeing civil war in Sri Lanka to live with her father Satkunarajah Aiyampillai who was in the UK on a study visa. Before he died from bowel cancer surgery complications in 2011, Mr Aiyampillai applied for a visa extension but that application passed away with him.

Miss Satkunarajah was granted leave to complete her secondary education but had been trying to secure permission to complete her BEng Hons degree in Bangor, which she began in 2014 and has only three months left to complete.

Hywel Williams MP said: “This is the news we’ve all been hoping for. I’m so very glad that Shiromini and her mum have had this deportation order rescinded and released from the detention centre. I’d like to thank everyone who backed the campaign to have the deportation order lifted. So much has been achieved in so little time.”

Duncan Lewis Solicitors, who are representing Shiromini, explained that they were contacted Sunday following the national campaign on Shiromini behalf. They are due to fill in an application in the morning for the Home Office to suspend removal but the solicitors said: “There was no reason for Shiromini and her mother to be obtained, they have committed no offense.” They hope to have Shiromini and her mother back in Bangor within the next 48 hours.

Raja Uruthiravinayagan, of Duncan Lewis, who is representing Shiromini Satkunarajah, stated: “It is clear that issues of fairness and justice are at stake in this case. It is telling how the plight of Shiromini and her mother has generated a huge wave of public sympathy and support. We are inviting the Secretary of State to restore a modicum of justice and fairness in our broken system and give favourable consideration to this case.”

It is unclear what the terms of the release are as yet but we know that Shiromini will now be allowed to complete her studies at Bangor University.

NUS Wales Deputy President Carmen Smith said: “I am extremely grateful to all those who’ve stood alongside us, campaigning for the release of Shiromini and her mother: their local Member of Parliament, Hywel Williams, the Shadow Secretary of State for Wales Christina Rees, Change.org, the media, Students’ Unions across Wales, and many thousands more across the UK. This shows what good we can achieve when we work together.”

“I remain of the steadfast view that deporting Shiromini would have been an absolutely disgusting thing to do. It is imperative that we value people, their skills, experiences, and cultures, whoever they are and wherever they come from.”