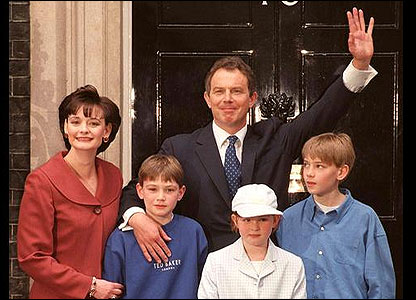 The 2nd of May has proved to be historic. 419 seats compared to 165. 18 years in opposition has finally ended in a victory people dreamed of but never thought a reality. As their slogan said – New Labour, New Britain. At 43, the youngest Prime Minister this century. But that is only the start of things to come. A Scottish Assembly, A Welsh Assembly, Northern Ireland peace deals. And that is just the start. A new era really has begun. John Prescott, Gordon Brown, Alastair Campbell, Peter Mandelson. These are the names that will become infamous in the years of New Labour.  What of the Conservatives? Broke, Leaderless, Directionless, and with their most capable politicians out of seats, there doesn’t seem to be a future for them. This is the time for new Labour. New babies arriving in number 10, a young family, this really is the year of change.

It will kick off with a new chapter in Europe – A social Chapter to be precise, more accountability, reforming the House of Lords, removing the majority of the hereditary peerages, transforming Prime Ministers Questions. The list is endless. British society will be transformed by it. A national minimum wage, biggest ever sustained investment in the NHS.

Politicians seemed to have become transformed from dowdy, inaccessible political soldiers into a more accessible, friendly, humane entity. Watching Tony Blair on the steps of 10 Downing Street with his wife and young children, he seemed like anyone else- just a man with the normal family issues, but with only the tiny added pressure of running the country!

The third way really has become the new way.