Getting Intimate with Ed 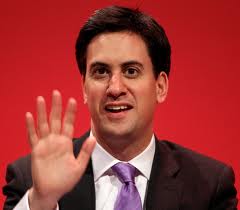 As an individual confused and tired of the political world, to me Ed Miliband appears to have a white toothy smile, a caring attitude about every individual, and an aura that no one except him and his party’s policies are correct or valid. Sound familiar?

If you are like me and only really concentrate on politics when the elections come around or another expenses scandal looming; you will be in the dark about the ins and outs of day-to-day politics. Only the other day did I find out that there was such a thing as prime ministers questions, (every Wednesday, at 12pm, for half an hour if you were interested- available on the BBC website live) However one thing is clear in my mind about all politicians – they lie. Fact. And yet when it comes round to elections we tend to believe, or perhaps pray, that these guys might actually be advocating the right policies for us. However this is never the case. For example Nick Clegg’s (Liberal Democrats- Yellow to me) promise to stop any increase in university fees- we all remembered how well that went… Controversially Ed said that this vote “is a disaster for young people and families up and down the country, who now face the prospect of significantly higher fees and higher debt when they go to university”. But when I look at Ed Miliband I see this charm that he is giving off that makes us want to believe what he is saying. Could this be first politician to actually tell the truth? Well no. I mean his polices have already changed, just because the Prime Minister’s (Conservative, blue) ideas were slightly resembling his. Then there is his mouth! I mean have you seen a mouth making that shape ever? It often makes an ambitious escape to go hang with the ears (and don’t get me started on the comparisons to Wallace and Gromit!) There is also the awkward moment when he forgets peoples or hospitals names “it’s a great honour to meet the doctors and nurses at…’ Ed pauses, ‘… sounds a bit like Bottlebank?”. Does this sound like someone we can trust and vote for in the next general election to become our next Prime Minister? I don’t think so, and so do a lot of other people. After some introductory research it is clear to see that there are some strong opinions on ‘Red Ed’. Ed gained this nickname early on when he became leader of the labour party (red) and was voted in by the trade unions – not even by the Labour Party’s own members!

This story takes another twist, because when looking at Ed I personally see one of two halves, the other half being, of course, David.  The elder of the two Miliband brothers, David appears to be quieter and much more approachable, giving a sense of independence and a new prospect to politics. Originally competing against one another, David is finally standing up for little brother with an article I read today quoting “he is the best man to lead Labour”. This is the first time David has spoken out publically about his brother since the election in 2010. He also spoke strongly saying “I think what Ed has shown in the last eighteen months is a willingness to engage with those big and difficult arguments that the country desperately needs”. But has he? So far we have seen him miss the Prime Ministers Questions to take on Bolton table tennis champions, forget the name of a hospital mistaking ‘Brocklebank’ for ‘Bottlebank’ and taking line dancing lessons in Shrewsbury.

So in my opinion I am unsure of the smile, of the comments- of Ed Miliband. Is he in fact the right person to pull labour (red) out of the water and make them the party that was once loved by the nation?