On The Campaigning Trail 2012 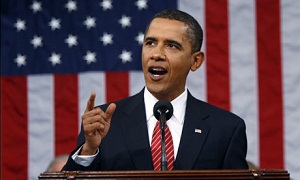 Lies, rumours and cover-ups have gone hand in hand with American elections since the late 1700’s, where sex scandals, undesirable relatives and the shady exchange of money were all prime ammunition for presidential candidates. The boundaries are removed and outcome the forbidden topics; the popular religious gambits and, hot topics for the White House, war and terrorism. As a result, no candidate will be able to take a debate during their campaign without having a quote or two taken out of context and manipulated with the aim of giving them a public status worthy of Nixon.

Take Herman Cain for instance; cancer survivor, patriotic Navy man and high-flying corporate executive. Popularity showed him as a strong contender in the Republican push for the Presidency, scoring higher in polls among Tea Party activists last February than Sarah Palin and Mitt Romney. Step forward then accusations of sexual harassment and, coincidently, just in time to question his character for the state level primaries in January. Claims like this, even if they’re unsubstantiated, remain in the public consciousness, especially among voters who remain undecided. Even the most objective of Americans will wonder if there is no smoke without fire, especially when the media has rolled out an article every day since the headline broke as “gentle” reminders.

Anyone appears to be fair game, including the female front runner for the 2012 elections Michelle Bachmann, the first republican woman elected into the House of Representatives. With a past resume as tax litigation attorney and an enthusiastic tea party insurgent, she is running on the premise of simplification all wrapped in a package of Christian-conservative ideals. What wasn’t part of her campaign plan were accusations of questionable mental health, with resistant republicans spanning the line “Stress related condition “incapacitates” presidential candidate; heavy pill use alleged.” Voters should perhaps draw their own conclusions based on some of Bachman’s somewhat questionable debate quotes, “Carbon dioxide is portrayed as harmful, but there isn’t even one study that can be produced that shows that carbon dioxide is a harmful gas”. We’re filing that one under ‘suspect’. 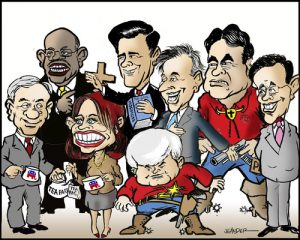 It seems that even the world’s golden boy, Barack Obama, has crafted a well devised smoke screen, allowing a few below-the-belt punches of his own. There is some evidence to suggest heavy involvement by a senior advisor, David Axelrod, in the prominent smear campaign of the 2012 election. The sexual harassment allegations brought against Herman Cain are just part of a colourful history of sexual misconduct cases aimed at Obama’s opponents. Surprising then that Obama has donned his patriotic halo and plucked at the heart strings of the everyday American by damning the use of smart techniques. “What you won’t hear from this campaign or this party is the kind of politics… that sees our opponents not as competitors to challenge, but enemies to demonize.” No candidate, it appears, is squeaky clean.

However, if you can survive the name calling, the bullying and accusations, you’re sufficiently prepared to lead one of the world’s most powerful nations. Nothing weeds out a weak candidate like the inability to side step a good smear campaign and maintain that everyman image.  Darwin eat your heart out, it’s survival of the most adaptable in American politics.