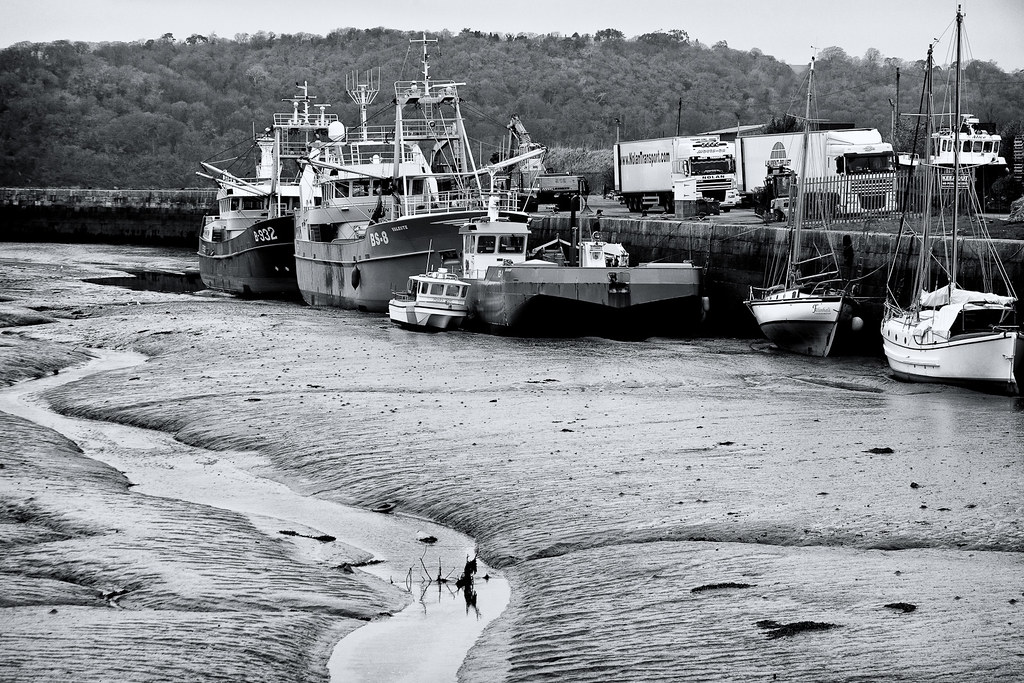 Walk out of Bangor via beach road and take the first left. You’ll find yourself ambling down to Porth Penrhyn. The initial impression is that of your average boatyard.  A few fishing boats, yachts and occasionally some interesting cargo. A good place for a different view of Bangor.

Yet leaving the harbour you may notice the markings of a train line. A tunnel under the bridge leads you out of the port and along the river Cegin. It was along this path that the Penrhyn Quarry Railway once stood, transporting slate from the Penrhyn quarry to the docks of Bangor until 1963.

Since the Middle Ages, Wales has exported slate from our coast. The Cambrian slate deposits that lie south-east of the strait mean that quarries and their respective ports tend to spring up between Caernarfon and Bangor.

And as early as 1413, Slate was being quarried over in Penrhyn. Yet it was from the late 18th century, as the UK industrialised and grew its empire, that Welsh slate began to boom. As the country moved into the Georgian era, Wales started to account for the brunt of UK slate production, thanks to the unstoppable force of Caernarvonshire quarries.

But this meant expansion and new logistical methods. Penrhyn quarry built the train-line to Bangor in the 1790s, Bangor’s port serving as the gateway to rapidly expanding slate-roofed towns of England and equally the quarries’ worldwide exports, to Ireland and colonial cities.

By the 1890s, the Penrhyn Quarry was the largest slate quarry in the world.

Unfortunately, Penrhyn Quarry was hit by labour disputes and deteriorating worker relations at the end of the 19th century. With Welsh liberal voting workers and generally English, tory-minded management. A pre-existing divide laid the scene for disagreement. After stricter management was introduced in 1886, the next 10 years saw relations between labourers and management gradually fall apart. Culminating in the ‘Penrhyn Lockout’. An 11-month long strike protesting union disputes.

Then in 1900, another strike began. This time it lasted 3 years.

Famous was the phrase ‘Nid oes Bradwr Yn y ty Hwn’, (‘there is no traitor in this house’) seen written on the windows of Bethesda houses, of those who supported the strike. Decrying any who crossed the picket line.

The persistent strikes lead to the decline of the Penrhyn Quarry. This mirrored the Welsh situation as a whole in the 1900s. Ground was lost to French competition, and European exports were dealt a final blow by two successive world wars.

However, Penrhyn Quarry continued to send slate by rail down to Bangor until 1962, and the Quarry remains active as of 2020. Even with the rail line gone Porth Penrhyn still serves the Quarry. The National Slate Museum of Wales noting:

‘Exports of crushed slate by Penrhyn Quarry, through Porth Penrhyn currently to Rotterdam, or ports along the south coast of England, have grown to become a significant proportion of Welsh Slate sales in addition to several containers of roofing slates being shipped every month to Australia alone (taking approximately 45 days) Welsh slate is now covering the roofs of buildings as prestigious as the New South Wales Supreme Court and historic as Unwin’s Stores, both in Sydney Australia, as well as the Arts Centre in earthquake-hit Christchurch, New Zealand 2012. Europe also is a prime destination for Welsh slate with shipments of slate and decorative aggregate within Europe continuing to grow and evolve in particular. In 2017 a total of seven shipments totalling almost 14000 tonnes of slate aggregate were made from Port Penrhyn in Bangor’

Bangor’s Porth Penrhyn also maintains a significant business outside of slate. A quick look at the website of the port reveals ‘In recent years the Port has seen a rise in commercial shipments with Mussel Dredging companies and Importers of sand based on-site, regularly exporting of materials from the local Welsh Slate quarries and used as a hub for Marine Commercial Contractors feeding projects throughout the North West. Most recent projects include the Gwynt y Môr Windfarm and construction of the Moelfre Lifeboat Station.’

So, perhaps wander down to Porth Penrhyn and follow the old rail line. There’s a rich history here that harks back to the days of a more industrialised Menai. It’s now known as the slate trail and will take you through Bethesda and beyond.

Just make sure there are no traitors in your house!