Where Have You Been? Palestine 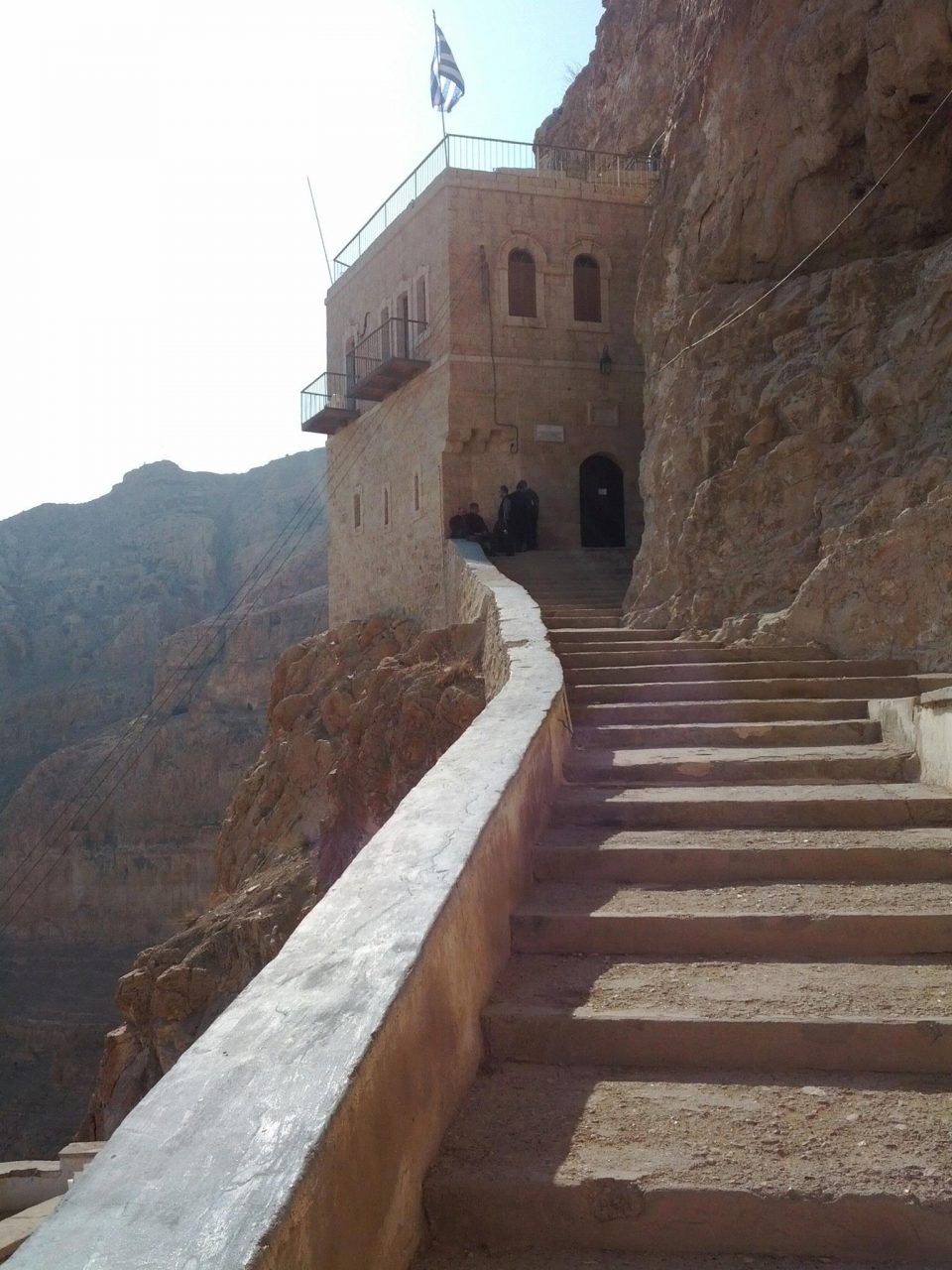 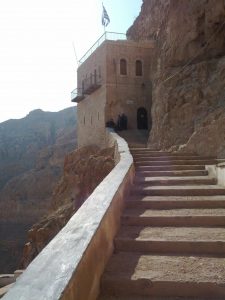 I premise this by saying that whilst of course I had an opinion on the situation before I travelled there, the main opinion I had was that I didn’t know enough about the situation for my opinion to be worth squat. After a week there, that hasn’t really changed, but it has certainly refined my thoughts. But still, I am just an outsider, and certainly no expert. Anyway, the week was never supposed to be a trip in ‘solidarity’ with anyone or a fact finding mission – it was a holiday with my friend. So we start at the airport…Why do people rag on EasyJet all the time? They charge you for sandwiches. So what? I fit in the seat, I wasn’t carried stuck next to a child and the service was fine. Really don’t get it. Enough of that.

First night was the disaster night. Flight landed at Amman airport at about half 8 – after an hour going through immigration and the like, it was obvious to the taxi drivers that the border was closed. Sadly, it wasn’t that clear to the border guard Cisco had spoken to who told him that the last bus would leave at 10:15pm. A 30 dinar (roughly £30) and 45 minute trip proved that to be wrong. So, an extra 20 dinar got me back to Amman and $170 got me what was basically the last hotel room in Amman.

$170 sounds expensive doesn’t it? Apparently though I was in one of Amman’s 5* hotels so that should be fine. It was a Holiday Inn – how that counts as 5* anywhere other Hell I’m not sure. Regardless, it got me a room with a phone, which was the most important thing of all, as I had had no communication with Cisco since leaving the airport two hours before, who expected me to have arrived across the border quite a lot earlier. After making new plans for his Dad to rescue me the next day (which he did – hero!) I grasped the chance to turn this problem into an opportunity by seeing a city I didn’t think I’d see.

The romance of the situation possibly got my hopes up – trapped in a strange city, full of new sights, smells and sounds, new languages and foods – all very exciting. I headed out to see the city and after a 5 minute walk, careful to avoid the coverless manholes and to not breath through my nose lest the petrol fumes overtake me, I made it to what looked like a small shopping area, complete with food places! Sort of. I was well catered for if I wanted pizza, burgers or doughtnuts. Not so lucky for those seeking a taste of the local cusine. And when I say “made it to”, I am slightly exaggerating. The glittering lights and greasy smells (I assume – the petrol fumes were still in danger of shortening my life significantly) were across a busy, 6 lane road that I had no way of crossing. All there was on my side was a Chevrolet dealership and a billboard for whatever pec-stacluar film Ryan Reynolds is in at the moment. My dreams were ended. I went back to the room, ordered an $8 sandwich from room service and watched football from the UAE.

This is a pretty long passage, but I just want to be sure you all understand what a fucking toilet Jordan is. If any Jordanians are reading this, please, I mean no offence. I’m sure the crass Americanisation and car-crazyness are not what you want in your land. But my God, Amman is horrible. It has all the stink of America and none of the smooth, brainless anaesthesia that American Americana also has. Sad.

Anyway, the border. So, I knew it wasn’t going to be easy getting across just from what Cisco had told me. In short, I went through four different border check points just to get from Amman to Ramallah. The two things that stood out the most for me was the massive amount of waiting, and the complete disparity between how Palestinians were treated and how pretty much everyone else was treated. This was even more obvious on the return leg. Fully expecting it to take another 2 and a half/3 hours (like the journey from Amman to Ramallah, when I was treated like a Palestinian), it actually took about 45 minutes. Though I paid the same amount of money, myself and three other non-Palestinians were immediately whisked across, whilst anyone Palestinian was trapped on a coach for God knows how long. 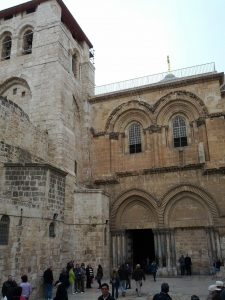 This disparity continued when I travelled to Jerusalem. I was going with my the mother of my friend and host (Samia) and young sister (Mai, aged 8), as my friend isn’t allowed to travel to Jerusalem (Do I need to pass comment on that? I think not). The first thing that came to mind when we arrived at the check point into Jerusalem was “cattle sheds”. The barn like entrance point funnelled people into single file metal grates, topped with razor wire, as Israeli soldiers with very large machine guns watched from outside. No VIP treatment here for me. Eventually, after about an hour of queueing through two different sets of steel bars and large turnstiles, we got to the front of the checkpoint.

Samia had become worried as she had thought it would be fine to bring Mai with us on her permit and ID. Unfortunately, a man in the queue with two sons, roughly Mai’s age, had been sent back. Apparently the Israeli’s will now send you back if you are travelling with a child as young as 6 that doesn’t have their own permit. Regardless, we went ahead, and after my belongings were X-rayed for about the twelfth time that week (which I’m sure is connected to a button falling off a few days later…).

Unsurprisingly, the sour faced officer at the check point (and I have yet to meet any cheerful border guards anywhere in the world) was not that impressed about the situation with Mai, and then BOOM! A British passport appears and suddenly, smiles, waves all around. We are all waved through. A fairly common occurrence frankly whenever my little red book appeared.

This brings us nicely on to the few hours I spent in Jerusalem. Throughout the trip I had been reading Jerusalem: A Biography by Simon Montefiore (which is probably the best book I have ever read), and it had deeply impacted my time there. Our time was limited, so we didn’t get to see the Western Wall or the Dome of the Rock, but we did have look round the Church of the Holy Sepulchre. Religion isn’t something that I really care about though, and I far more enjoyed walking the streets of the old city, seeing people’s lives and gently prodding American and German tourists in the gut and pretending it was because we were all squashed (I am, if nothing else, a gentleman of style and poise after all). The romance of the place is hard to ignore, as is the sheer weight of history. The dusty streets, the food vendors, the rugs draped across store entrances at prayer time – things that haven’t changed in centuries. Then we went to McDonalds.

Just to explain, it wasn’t for me. Samia and I had eaten some falafel and other little bits in the old city, but Mai being 8 and lover of anything on TV, wanted McDonalds for lunch. So we went. The most alarming thing was the armed private guard at the front who wanted to know if I was carrying a gun, the least surprising thing was that she didn’t search Mai. Anyway, Mai acted like the good little consumer she is, and we headed off back to Ramallah for yet another amazing home cooked meal with friends/family.

I should be honest. I didn’t really like Jerusalem. Too many guns, too much religion. If you read the Montefiore book, you get an understanding for just how much bloodshed, violence and suffering this one city has caused, and for no reason other than three of the world’s largest religions think it should be theirs. It’s not that close to either the Jordan River or the Mediterranean, it has little in the way of natural riches and isn’t really important. The amazing thing is that there is so little certainty about what people are actually praying at that you’re more likely to be praying to the tomb of a Roman centurions wife than you are of any particular prophet, priest, saviour, warrior, king or other religious celeb. I have never understood religion, but living in the UK, I can just chuckle at what I see as odd, archaic rituals, cringe at the self-deprecation of it or get angry at whatever nonsense or atrocity the Pope pops up with. That wasn’t possible in Jerusalem. The religion is in your face and fiercely, worryingly intense. Every year, 250 people are sent to mental asylums with Jerusalem syndrome. After just a few days visiting the city, these poor folk loose their marbles and declare themselves the new Messiah. Terrifying. And for this one little nexus of religion, surrounded by scrubland, millions of innocent people (let alone millions of soldiers and warriors) have died. For little more in my mind than ownership of the rock someone stood on, slept on, ate on, or died on… possibly.

I fell in love with this land, and desperately want to return soon, including the Israeli side. It’s a totally insane place, but it got under my skin.