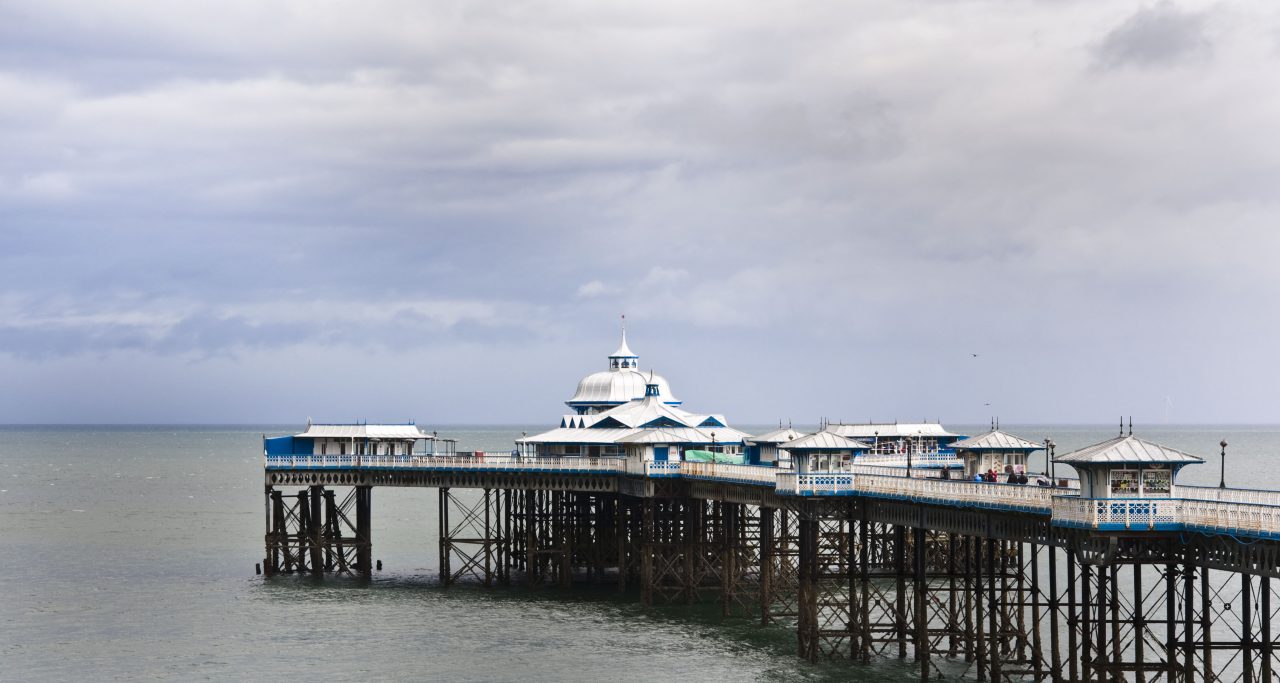 Each issue I will be travelling to a place within one hour from Bangor and telling you the places you must visit before you leave this city!

This magnificent and uniquely shaped pier stands as a testament to Victorian design and architecture. Situated in the seaside resort of Llandudno, this is definitely something not to be over looked. Taking only thirty minutes to reach on the A55, you have no excuses not to visit. At 2,295 feet (700m) the pier is the longest in Wales and fifth longest in the UK. A British Tourist Authority report in 1975 said of it, ‘it zooms out of the sea…a magnificent sight,’ and in 2005, the pier was voted “Pier of the Year 2005” by the members of the National Piers Society.

The pier was originally opened in 1858 and was only 242 feet (74m) long when built, on 16 wooden piles. The short pier was built to protect the rights of its owners to a much more ambitious scheme to build a major port in Llandudno Bay. However, unfortunately, the pier was severely damaged in the Royal Charter Storm of 25th October 1859. Although repaired and used for a further 16 years, the pier was too short and could only be used by steam ships at high tide. The present pier was opened to the public on 1st August 1877, however the new landing stage was added in 1891 and re built in 1969.

The pier is very unusual in that it has two entrances; one on the promenade at the north parade and the other, the original entrance, on Happy Valley Road. It was also the site for a Pavilion Theatre. Beginning in 1881 the 3 storey 2,000 seater structure was constructed in the flamboyant Victorian style of the era and was complete with its intricate cast-iron veranda, which ran along the seaward side of the theatre. The pavilion was just over 200ft long, with its width varying from between 84 – 104ft. A strange and unusual incorporation was a swimming pool in the basement of the pavilion, the largest indoor swimming pool in Britain at the time! Sadly for the pier company, problems with water quality meant that this unique feature had to be filled in shortly after opening.

One success of the Pavilion was the Rivière’s Orchestra, which was an instant hit, and within a very short period of time had trebled in size to symphonic proportions. It contributed to the development of that great British summer entertainment, the promenade concert. As public tastes changed then so did the pavilions entertainment schedule. This new variety show era heralded a new beginning for the pavilion and made it a firm favourite for the major artists of the time. People such as George Formby, Petula Clark, Cliff Richard and the Beverley Sisters where just a few of the household names that performed at the pavilion. However despite its long life of 109 years, it closed in 1990 finishing its life as a horror walkthrough waxwork exhibition.

The modern pier is now a grade ll listed piece of architecture and features panoramic views of the Happy Valley gardens and with the Great Orme set in its backdrop, what better way to spend a day than strolling down the Victorian pier with ‘olde worlde’ features? The Pier is open 364 days of the year and boasts many different attractions, as well as live entertainment every day through the summer months. Receiving thousands of visitors a year, Llandudno Pier has come to life once again.

The pier boasts many different kiosks offering a wide range of products. As you enter the pier off the promenade you are met by the smell of freshly cooked doughnuts, a must for any trip to the seaside. Also available at the front of the pier are hot dogs, candy floss and, of course, the traditional soft ice creams. If you prefer they have a quaint little coffee shop selling fresh ground coffee from the Starbucks range “Seattle’s Best”. Also on the pier there is a fish & chip shop and bar and café so there is plenty of choice for things to eat and drink. During the main summer season you can enjoy having a drink at the bottom of the pier whilst watching the live entertainment every afternoon, with a live jazz band performing every weekend. The pier also has 2 different confectionary kiosks selling local fudge, biscuit and jam whilst also offering a huge pick’n’mix selection and, of course, the customary Llandudno Pier rock. The café offers a wide range of snacks and main meals with the main focus on healthy eating. But if you did fancy something special then why not try the Carte D’or kiosk with over 12 varieties of delicious creamy ice cream.

On the pier you can find fun for everyone. There are two arcades on the pier with the main arcade Leisure Island, open all year-round, and you can find all the latest arcade games as well as an all-cash gambling area (over 18s). On the pier you will find numerous novelty and gift shops selling a wide range of gifts with some real bargains to be found. There is a children’s play area with a bouncy castle and a huge bumpy slide and if that’s not enough fun for the kids then there are numerous fairground rides and go-karts they could try.
Goods sold in shops include leather goods, ceramics, clothes, tapes & CDs, binoculars, lewellery, local photography prints, joke items, sporting goods, Welsh gifts, cards, books and aromatherapy, and there are numerous different gift shops. If you wish to go fishing whilst on the pier you can purchase day fishing tickets from the tackle shop which is found by the Happy Valley entrance to the pier, although be advised fishing is only permitted on the landing stage during the day.

Steeped in history, Llandudno Pier is still considered by many to be the finest surviving Victorian pier in Britain. Llandudno pier is definitely worth visiting before you leave, you will find yourself surrounded by arcade games, cafes and shops. But not to forget you will get the opportunity to experience one of the best views in North Wales.