Kate Hudson defined Hollywood Glamour at this year’s Oscars. The blonde beauty is a native Californian and this usually translates to a much more relaxed look on red carpets, but at this event Kate was sleek and elegant. Despite this her look was quite simple, beginning with a flawless foundation base; she chose to follow the age of rule of ‘eyes or mouth’. She wore a nude lipstick on her lips that allowed the focus to be grabbed by her stunning eye makeup. She created a smoky eye look using the classic white, grey, black colour pallet and stood out from the majority of Oscar looks by not donning a feline flick at the end. She finished the look off with tumbling shiny curls; swept to one side (the one sided hair look was very popular at this year’s Oscar’s).

Overall verdict: While still wearing her trade mark effortless look, Hudson manages to remind us what Oscar beauty should really be about, simple, sexy and timeless.

I think we can all accept that beyond winning the Oscar itself, Lupita also won in the fashion and beauty stakes as well. While she channelled the big look of the night with her barely there makeup Lupita bought a glow with a dewy finish to her foundation that stood out in the dry matted looks of everyone else on the red carpet. Her pretty Coral lipstick added a pop of colour that worked well by complimenting her skin tone as well as contrasting her baby blue dress. Having such short hair as Lupita it is almost impossible to bring a new style to any event, but for the Oscar’s Lupita succeeded by accessorising her look with a simple silver headband adding instant glamour to her hairstyle.

Overall verdict: Lupita succeeds where Jennifer Lawrence failed. Her use of fun youthful colours and accessorise bring a fresh look to the Oscar’s and succeeds in making her the bell of the ball 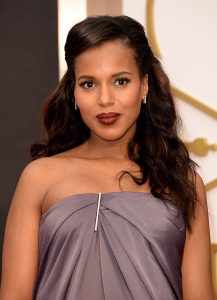 As has been mentioned a natural look was the name of the game at this years Oscars, so Kerry Washington’s sharp contrast to this was a welcome relief. The actress walked the red carpet with a gorgeous glow due to being 7 months pregnant but this didn’t stop her from also bringing the glam! Kerry worked a dark eye, dark lip combination opting for a light cherry lipstick and heavily eye-lined lids. The final effect was a much harder look than many of her counterparts on the carpet, but the decision to finish the look with loose curls, loosely pinned at the back of her head created a much softer finished products.

Overall verdict: Despite how gorgeous (almost) everyone looked on the night, the nude tones seen everywhere needed Kerry’s strong look to stop the repetitive cycle and give us a wider range of makeup inspiration for nights out.

is undoubtedly a Hollywood icon. With a career spanning over five decades she has been at the forefront of fashion for the majority of this time and has graced many a red carpet. Despite this knowledge she still managed to unfortunately seriously miss the mark at the 2014 Oscars. Instead of aging gracefully Minnelli tried to combat the aging process in a variety of ways. First was her makeup look – the natural, ‘barely there’ makeup look was a popular trend seen in abundance across the red carpet at all the award shows this season, but Minnelli’s attempts fall flat with the look conveying ‘no effort’ rather than ‘effortless’. The second issue with the look is the chunky blue hair streak she sported. While blue has become a popular choice for many girls in the last year mainly thanks to pop stars Demi Lovato and Katy Perry rocking the trend, it all looks a bit desperate on Liza.

Overall verdict: Liza Minnelli, I still love you, but please next year, bring a more appropriate look to the Oscars. 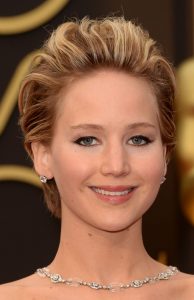 Jennifer Lawrence is a human being that I never thought I’d be able to criticise, but here I am! I’ve been frankly underwhelmed with her look ever since she cut her hair last Autumn. While I think the original pixie haircut suits her, she’s not been able to convey any real glamour on the red carpet since she cut it off.  Jennifer’s hair at the Oscars was well constructed and I can see someone like Emma Thompson or Meryl Streep looking fantastic with the same hairdo, but Jen is 20 years their junior and no matter how many times I look, it still feels like a hairstyle much too old for a 23 year old. Her make up look is again simple. Jennifer has flawless skin and can get away with very little in terms of makeup, but this was the Oscars and I can’t help feeling she could have (again) bought a bit more of a youthful colour pallet to this look.

Overall verdict: If Liza has to give up trying to be young, Jennifer please give us a more age appropriate, fun look next time.

Editor note: To see a Seren Editor’s reviews on Emma Watson’s Oscar beauty trend, take a look at our ‘Some Cutting Remarks’ article