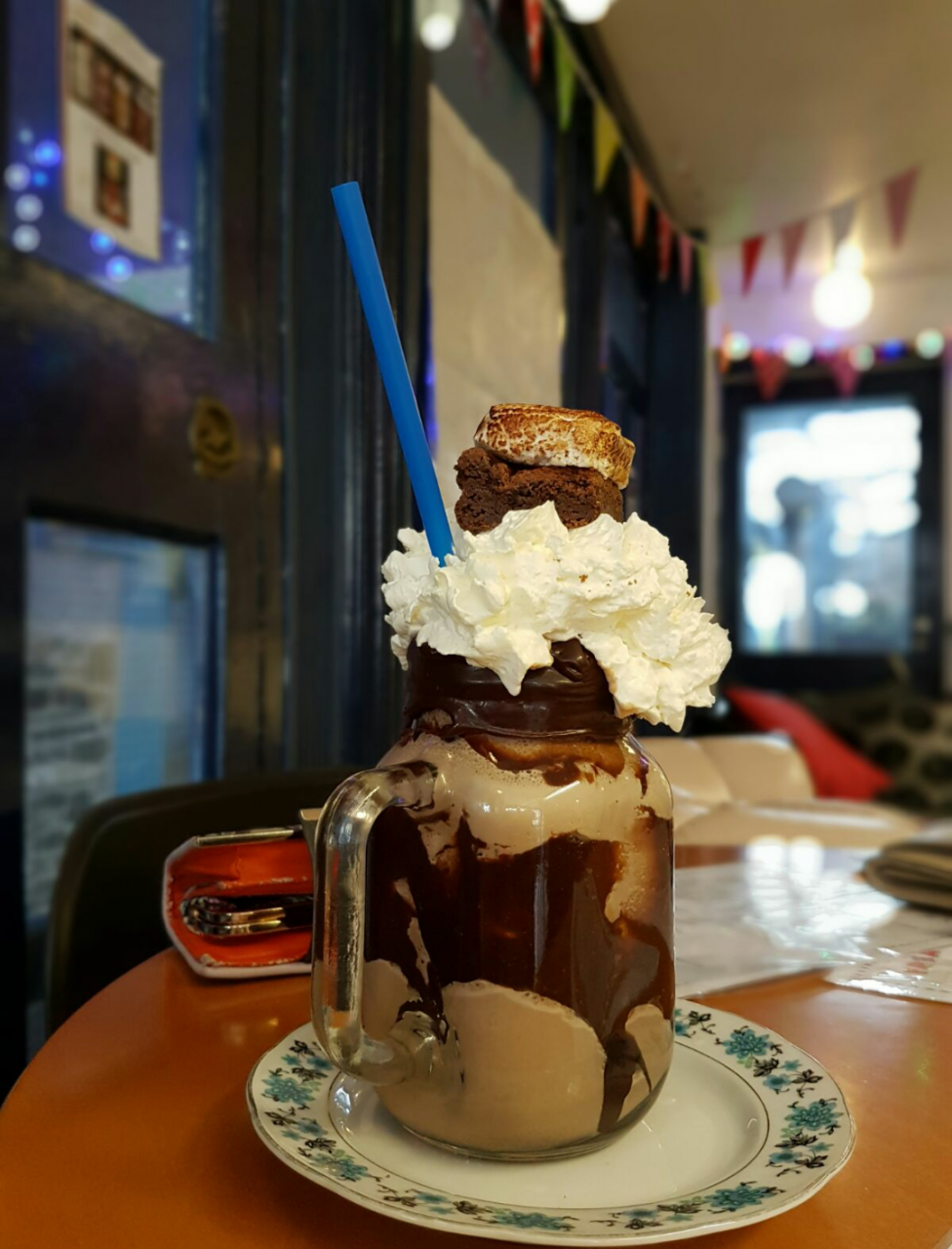 Bangors infamous Freak Shake is sadly coming to an end and I’m not sure we’re all ready for it. Freak Shakes situated on upper Bangor has reigned supreme for 2 years and sadly it is time to say goodbye. I popped in to get the insight into its origins and plans for the future.
Freak Shakes Bangor, address 12 Holyhead Road, Upper Bangor, has been here since 21st October 2015. So it’s now been 2 years up running for this milkshake shop and the end is in sight.

Freak Shakes was actually an Australian idea from a Pâtissez cafe in Canberra. Essentially, thick and creamy milkshakes stacked high with sugary delights! In Summer of 2015, they were plastered all over social media and had a high impact upon it. They photographed well. The owner, Giles, was looking for something to do, and this place was available, so he thought if he took it on, people would come. So after market research on facebook about the place, it was the second most popular place in Bangor by likes, so he thought he’d open! And weren’t we excited!

It actually wasn’t popular initially, but got very popular in February of 2016 when the daily post got involved and did a piece, which by luck coincided with the beginning of half term, so got very busy. However, come second academic year not as busy. And the beginning of this year (February), it didn’t pick up at all. So it reached that time to move on.

Most popular flavour by the public are Nutella Twisted/Untwisted, this chocolate concoction is devised of a creamy nutella shake topped with vanilla whipped cream, more nutella and hazelnuts. The fun part is Twisted or Untwisted, whereby its embellished with salty pretzels or a  belgian sugar waffle.
However, Giles the owner swears by his French Mistress, vanilla shake, and Sicilian Sunshine, lemon curd! The French Mistress is a classy combination of vanilla beans, vanilla bean creme patissiere, whipped cream, topped with a french vanilla slice. Anyone else in love yet or is it just me? Inspiration for the Sicilian Sunshine  actually stems from the Hairy Bikers, including lemon curd, lemon zest, golden caster sugar, vanilla whipped cream, topped with a lemon Aberffraw cake!

Each made from hand, these wonderful creations are truly a spectacle Bangor will miss. Of course I couldn’t end the interview without getting one, I opted for the Mallow Choccy Fudge Packer; made from 70% belgian dark chocolate fudge and cocoa, crowned with whipped cream, fudgey chocolate brownie, and a homemade toasted marshmallow! 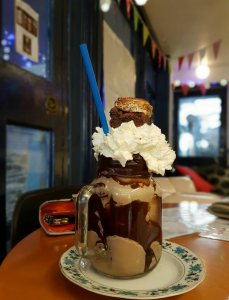 The menu contains a variety of tastes and flavours for all to enjoy, with 10 different shakes to pick from! With shakes at £6 and Burnt Offerings at £7 (including a days notice to get the ingredients), who could want more? To view the full menu or to look for opening hours, visit their facebook page: facebook.com/FreakShakes/ or you can contact them via Twitter: twitter.com/FreakShakes.

With official closing date end of November its last calls and i suppose a Long Goodbye is in order. Currently Freak Shakes are offering a promotion for anyone with a student card or in school uniform to get £1 off, or even a £1 with a copy of Seren, one promotion per person cannot be used in conjunction with another coupon. This promotion will be running until the bitter end.