An Open Letter to Loud Eaters 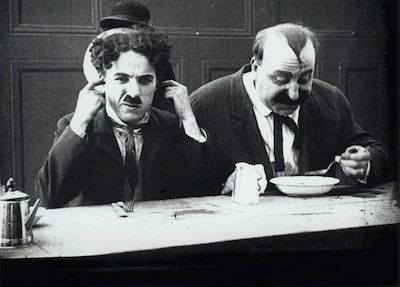 We’ve all been in a situation where skelping an infuriatingly loud eater seems like the only option. But despite its endemic frequency, there may be hope for an end to excess saliva. Exasperated, Joe’s tether has finally been broken…

You and I have met before. We’ve watched films together and sat in the same library; we’ve shared the same carriage on a cross-country train, you with your inexhaustible supplies and I with my tired ears. You feel happy when we’re together; I can see it in your mouth and hear it in my head at night. But without exception, each time I’m with you my ears try to convince me that blunt inanimate objects are in fact coquettish instruments for self-inflicted torture. You wouldn’t follow me to the hospital, would you?

Do you remember that time you just managed to catch the empty bus and decided to keep me in friendly company? You were sweating and panting and slopping your way through a pungent tuna and sweetcorn baguette. You should have seen yourself! The cat that got the cream. But if you’d have looked to your left and desisted from fondling your foot-long, you’d have noticed my face. You’d have been able to look straight through my dilated pupils and seen my enraged mind running through the sweet prospect of you suffering from of all kinds of ungodly, diarrheic sins forced upon you by some beautiful, saintly deity.

Every time you see the ‘no eating’ sign in a library, do you make a concerted effort not just to ignore it but to smear your diarrhoea all over its unjust words? I could close my eyes but I’d know it was you; I’d hear your clunky shoes click-clack into the room before you slam your bag on the table, almost as needlessly as your subsequent sigh, just in case anyone wanted to know you’ve had a bad day.

And then it arrives. You hastily remove your sandwich from your bag like a ravenous dog; the sticker is shown no mercy as you whip it off and release the odious scent of egg mayonnaise. GBH to my ears ensues, each clamorous bite more harrowing than the last. You pause. I foolishly think it’s over – you couldn’t possibly need anything else – but instantly remember you’ve yet to salaciously lick your lips, nor grind away at a rogue piece of cress unfortunate enough to be lodged in the deep recesses of your villainous gob.

I hear your ‘mastication’ while I’m alone doing some ‘masticating’ of my own in a dark room and the crack of your jaw bones as they plead for your mercy. You slap that tired and risible piece of plastic that used to resemble something a little like chewing gum around your mouth for hours on end, disposing in the exact spot I later plant my foot.

If you think this is all disproportionate to the crime, you’re probably one of the guilty parties. Your chewing habits are as welcome in my life as that little bit of urine that escapes the final shake; as agreeable as the indignation of doing a deal with the devil (and your hand) when you’ve ran out of toilet paper mid-session.

You’re everywhere. I’ve been out to dinner and heard you straight away; you’ve got that laugh, haven’t you? The sort of throaty, forced laugh that gets nowhere near the eyes and suggests guilt. Are you laughing so emphatically as to deflect from your incessant loud eating? Have you heard about the people who suffer from Misophonia? That’s all your fault.

I’m going to a café next week, will I see you there, too? I’m already anticipating the arrival of your full English breakfast. The thought of the egg and its yolk slapping loudly off the plate and the incongruous severity with which you cut your sausage, scraping the plate as you go, will no doubt combine with the interminable crunch of your now cold slice of toast to produce your very own discordant Les Misérables.

After I’ve silently forced my meek bowl of bland and muted nothingness down my throat, I was thinking of going to the cinema to watch a silent film. Would you be so kind as to join me? I’ve heard that you love to eat popcorn and drink lots of coca-cola; I’d love it if you could provide your own sounds to the experience; the film alone just isn’t enough for me. It’s just not the same without your crunches and slurps. I just couldn’t bear to watch a film without your effects; I adore the way you roll the ice around your cup before quaffing that last fanny dribble of coke ruminating within. If you could, would you mind reserving your passionate interaction with your straw till there’s a lull in the film so that your public straw-fellatio gives us all something to listen to instead?

It would be a great shame if you were too busy to join me. If that’s the case, maybe you could read this again and let it mull over in your head? Consume the words and let them resonate violently in your skull; they won’t grate as much as the sound of your demolition of an innocent apple, but hopefully by the end of it all, you’ll be in a position to fully appreciate just how infuriating your loud eating is.