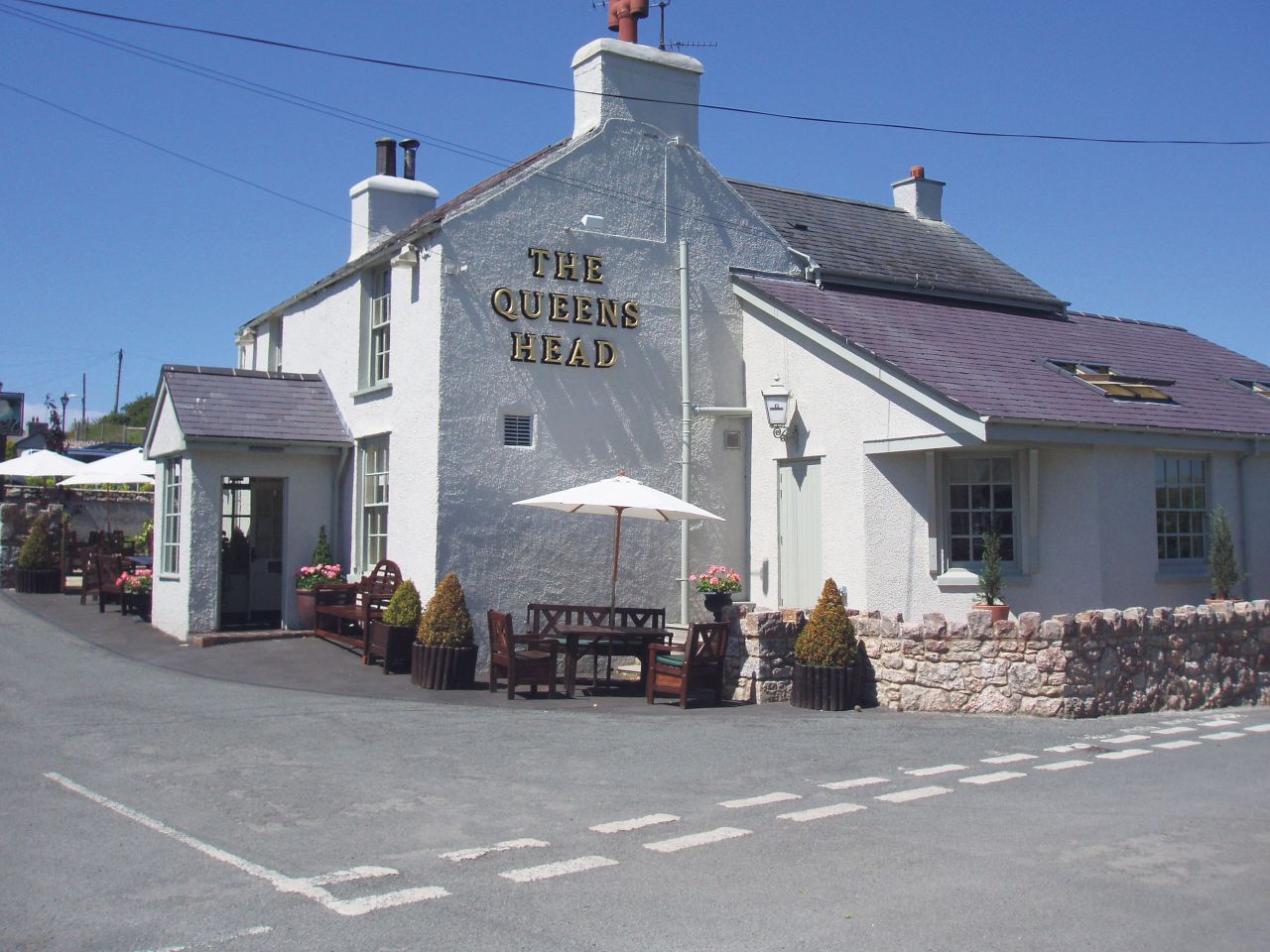 The Queen’s Head is in Glanwydden, a village that acts as the perfect microcosm of North Wales – idyllic, surrounded by rolling hills and inextricably related to its heritage. To reach Glanwydden, you have to pass Conwy Castle and could be forgiven for feeling trepidation due to the village’s isolated location. Each road is narrower than the last and there is a palpable sense that the last person to have travelled here was a 19th century drover with cattle in tow.
This isn’t true, of course, because Glanwydden is home to The Queen’s Head, winner of the AA’s Pub of the Year, Wales 2009-2010. It’s your archetypal British countryside pub; the kind of place that you could bed down in a barn and roll around in the hay with a country bumpkin. While there are occasional vagaries of change – salmon and coriander fishcakes probably weren’t on the pub’s first menu. Much of its traditional furnishings have been retained and its walls pay homage to the pub’s past and present with pictures of the surrounding landscape and local art. The Queen’s Head is just a really pleasant place to be.
Equally satisfying was my starter of smoked haddock and chorizo risotto; fat nuggets of paprika-rich chorizo complemented the creamy risotto nicely. A sharp vinaigrette on dressed rocket leaves balanced the dish out, though its thick, cloying texture (a consequence of it being just the wrong side of al dente) meant it fell just short of its £6.95 price tag.
My friend’s goat’s cheese tart was presented simply, a decent sized portion – oven-warm – accompanied by a honey and walnut dressing. Her ‘oohs’ and ‘ahhs’ gave her a slight edge on whose starter was better. One-nil down.
Anything piggy on a menu is all but guaranteed to attract me. I don’t know if it’s the perverse childhood Animal Farm memories or the bawdy effect its salty meat has on me but properly cooked pig is, in my opinion, one of life’s great pleasures. A main course of grilled pork loin, soused prune and Armagnac jus, cabbage mash, fresh vegetables, black pudding and crackling read beautifully, though not particularly pithily. In the end, the plate was as big a mouth full as its wording.
The pork loin was perfectly cooked, the tender meat resulting in a centre that glowed with the desired faint hue of pink. Just as delicious was the crackling; two long strips of hot salty fat, glassy texture and all, it’s just the sort of thing that makes you weak at the knees. Add to this a generous lump of buttery cabbage and mash, the black pudding and a rich prune sauce (or ‘jus’ – urgh) and the dish sounds a bit fat-heavy. But the introduction of acidic apple sauce, braised red cabbage and simply cooked palate cleansing vegetables – carrots, green beans and broccoli – balanced the whole thing out. This well-conceived balancing act was welcome, but ultimately futile; there’s only so much fat a man can take and despite the apple sauce’s best efforts, I surrendered my napkin just over half way through.
This decision was largely because I’d eaten too much rich food but lingering in the background was the real, sinister reason. Putting meat and fruit together is an idea as old as the hills and has some inherent sense behind it; a sharp acidity to balance and complement a rich, fatty cut of meat. But a solitary, fresh raspberry delicately positioned on top of a baked apple is nothing more than a frivolous waste of time. Public ignominy was the only thing stopping me from careening into the kitchen and throwing it at the chef’s head; why bother with it? They knew it was a needless garnish, I knew it was nothing more than pretentious poncery; they knew it wouldn’t work with pork, I definitely knew I didn’t want to eat an incongruous raspberry with my pork and black pudding.
My friend’s main of chicken Thai green curry may sound as misplaced as the infamous raspberry and such a dish in this sort of country pub instantly rings alarm bells – or should that be the sound of a microwave door popping open. But this wasn’t the case; though she’d had better versions from authentic restaurants, the “distinct flavours and perfectly cooked rice” meant it was a bit of a winner. As were the plentiful sides – mango chutney, poppadums and nan bread. Woof.
With the bill just shy of £40, we didn’t have the stomach for puddings in both senses of the word. If you are more of a main-pudding kind of person then classics such as sticky toffee pudding or bakewell tart at £5.25 are most likely to attract.
The Queen’s Head isn’t cheap but such cumbersome portions mean you won’t need to eat for another day or two. It’s probably a damning indictment that the main reason I’d visit again is because of this generosity and not necessarily the quality. The food’s good – better than good in flashes – but the lasting impression I have of The Queen’s Head is that there is better food closer to home.