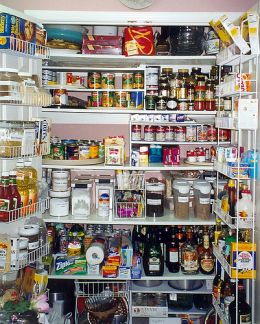 Fresh garlic isn’t especially expensive but as is so often the case, you’re left with the odd clove and decayed garlic skin hanging around your kitchen. Chances are that, unless you’re roasting a whole bulb, you won’t use one in its entirety. There’s a simple way to resolve this – garlic paste. Morrisons sell a large jar of minced garlic (in the Asian Foods section, next to the spices) that costs £1 and will almost certainly serve you all year. And don’t listen to inane drivel about garlic lingering around you; its hot, pungent flavour enhances anything from a spaghetti bolognaise to a blisteringly hot chicken curry or a warm baguette topped with copious amounts of garlicky butter. Who cares if it makes you smell; it tastes fantastic.

See above. Fresh lemon juice, as delicious and irreplaceable as it is, just isn’t a practical use of a stretched student budget; far better to buy a bottle of lemon juice and rely on its inferior but not devoid of acidity advantages. Try adding a little at the very end of cooking a pasta dish, its acidic hit will complement most pasta sauces. Be careful when adding to anything dairy based; its addition could cause the liquid to split if added too early or not quickly mixed through.

This is a fairly obvious but nonetheless deserving inclusion to the list. Salt is one of the basic tastes that our mouth reacts to, not only making food moreish but also enhancing savoury elements. Add a little to onions whilst they’re frying – the salt will bring out the water content and help to prevent the onions from burning. Sprinkle on top of meat straight from the oven; stir through a chocolate sauce to harmonise the sweet and bitter notes.

Butter is good for anything – spreading on your toast, dolloping on a jacket potato, melting in the microwave and pouring down your throat.

Soy sauce contains Umami, the zeitgeist culinary term of this decade. It’s found in ingredients such as tomatoes, cheeses and MSG (take-aways favourite.) It boosts savoury tastes in dishes (oddly, Morrisons sell a little tube of ‘Umami’ for around £2), soy sauce being a particularly umami-laden ingredient. Add a touch of soy to bolognaise and cheese sauces or play it safe and use it as a linchpin for any good stir fry.

Peas are pretty much a ubiquitous vegetable in food I cook at home. Risottos, curries and pastas all benefit from the addition of a handful of sweet peas. Fresh ones are great but not possible due to their relatively short season. Using peas as a background accompaniment to a dish is great and helps with your 5-a-day but they’re also great blended with some stock, butter, yogurt, fried onions, salt and pepper to make a lovely soup.

If Marco Pierre White’s tenuous association with Knorr is observed, every cupboard should have stock in some form – cube; pot; whatever. The use of stock is vital for some dishes – risottos, soups et al but it’s also very handy when money’s a bit tight and you can’t afford meat or fish. Make a cheap and tasty bowl of rice; crumble a stock cube in at the start of cooking and add any leftover ham, cheese, peas etc that you have lying around

This is a bit of a contentious one, primarily because spices spend more time at the back of the cupboard than they do seasoning our food. Be selective; don’t buy smoked paprika because one recipes says you need it. Compromise and use chilli powder; not the same but better than spending an extra £1. Chilli powder, turmeric, cumin and ground coriander should be enough to cover all spice bases.

This one’s down to personal taste and what’s cheapest but you should definitely give extra virgin olive oil a wide berth (unless you plan on making lots of salad dressings). It’s a waste of money and for several reasons should never be heated. Alternatives include the versatile vegetable oil; rapeseed oil (which, amazingly, is now produced in Wales) and sunflower oil.

I don’t have a particularly sweet tooth but I can appreciate the advantages of having a big bag of sugar in the kitchen, not least because of its cake-making commodities.