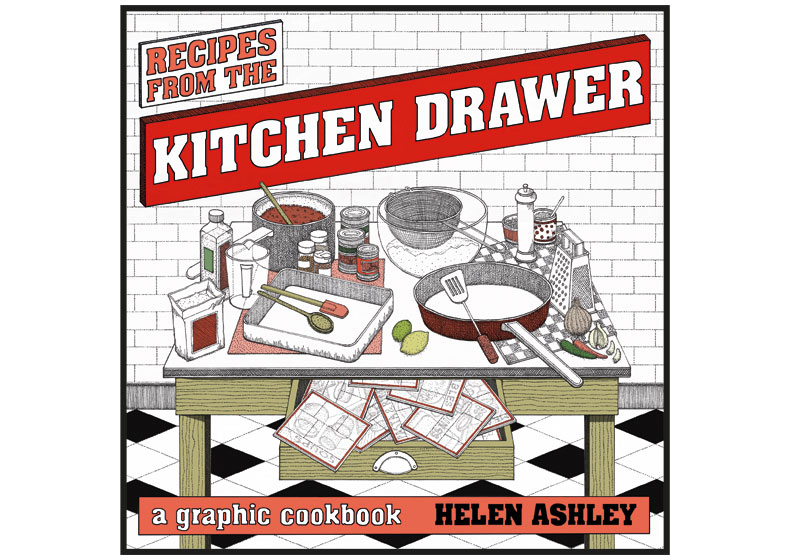 It’s becoming increasingly common for anyone that’s ever cooked a risotto to publish a cookbook – a quick Waterstones search of ‘cookbook’ brings up 5337 results – making it difficult to work out which ones are worth spending your money on and, with an ever expanding corner of the internet covering most culinary needs, those that just aren’t.

So it’s refreshing to see something different, a cookbook that doesn’t just tell you how to make ‘the bestest chicken curry ever’. Helen Ashley is an artist and illustrator whose idea for ‘Kitchen Drawer’ was born when family and friends started to use her hand-drawn, instruction aided illustrations to cook with at home.

The book’s layout is reassuringly basic. Each recipe takes up two pages; one listing ingredients, the other showing the method and drawings. The nature of the book and its layout almost forces the recipes into simplicity; no dish has more than seven separate steps and, almost without exception, use inexpensive produce. The eight chapters cover soups, pasta and rice dishes, meat, fish and vegetarian mains, puddings and lastly, cakes, biscuits and breads.

There are student favourites – shepherd’s pie, pesto pasta and chilli con carne – but also intriguing dishes such as tuna croquettes and aduki bean burgers.The back cover describes the recipes as ‘the comfort food you grew up with (think gooey cauliflower cheese, warming sausage and bean casserole and fresh, crumbly flapjacks)’ and it’s hard to disagree with that, though I’m not sure many of us ate vichyssoise soup too often at home.

If you’re panging for a home-cooked meal, this book is more than capable of giving you the recipe to recreate that feeling, whether it’s a comforting beef stew or a creamy chicken and mushroom pie.