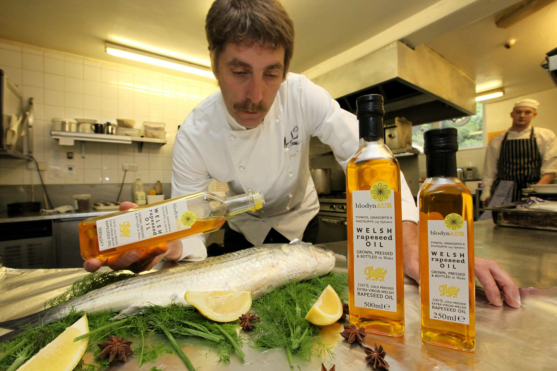 Blodyn Aur, meaning Golden Flower, is the first Welsh rapeseed oil; Welsh grown; Welsh pressed and Welsh bottled. Blodyn Aur is the brainchild of farmers Llyr Jones, Bryn Jones and Medwyn Roberts, as well as Geraint Hughes, a former student of Bangor. The oil is pressed near Llanfihangel Glyn Myfyr, near Corwen. They sell their bottles in 250ml and 500ml glass bottles, as well as larger 2.5L and 5L plastic bottles. It is currently stocked in all ASDA stores across Wales, but can also be bought online from blodynaur.com.

Rapeseed oil is part of the culinary zeitgeist. In the 2003/2004 season, 36 million tonnes were produced worldwide but by 2011, that number had increased to 58 million. To give some perspective, the U.K was responsible for just 60,000 metric tonnes in 1975 but by 2009, its production levels had risen exponentially; it currently stands at a little over 2 million tonnes p.a. Features that make rapeseed oil so popular include its nutty flavour, as well as its lightness in comparison to heavier oils such as olive. In this particular case, everything is Welsh. The seeds are sourced from local farms and interfered with as little as possible; nothing is extracted or added to the oil, yet it still has a shelf-life of at least nine months. Personally, I think this is one of its most impressive attributes; unlike rapeseed oil, olive oil turns rancid if kept in a bottle for more than three months (one way to test if your olive oil has turned rancid is to smell it. According to oliveoiltimes.com, if it smells like crayons, peanut butter or anything that isn’t naturally olive-y, it’s gone bad.)

Blodyn Aur is expanding. It recently launched a brand of crisps, Jones o Gymru, featuring flavours such as welsh mature cheese and onion, salt and vinegar and sea salt (in both cases the salt comes from Halen Mon, the featured sea salt from Anglesey.) A partner of Jones o Gymru is currently located in the university, researching blight resistant potatoes. Keep an eye out for the Sarvari Research Trust. You can find the crisps in the Belle Vue and Welsh ASDA stores, as well as Welsh Tescos from June onwards.

Rapeseed oil is lauded by chefs across Britain, with Raymond Blanc’s Le Manoir aux Quat Saisons using it heavily in its kitchen. There are many reasons as to why it’s so popular amongst chefs and cooks; rapeseed oil has about half the saturated fat found in olive oil and a particularly high flash point, meaning it can handle high temperatures without blazing. This makes it a very diverse oil, perfect for salad dressings, roasting potatoes or as a substitute for butter in dishes like apple crumble.

I really can’t speak highly enough about the benefits of rapeseed oil, in particular this Welsh one. What could be better than swapping an imported Italian or Greek olive oil for a locally grown and pressed oil that is not only good for the country but for your health, too?

Have your chance to win Jones o Gymru crisps by answering this simple question – what colour is the rapeseed flower? Email your answer to food@seren.bangor.ac.uk . The first 5 correct answers will be the winners.