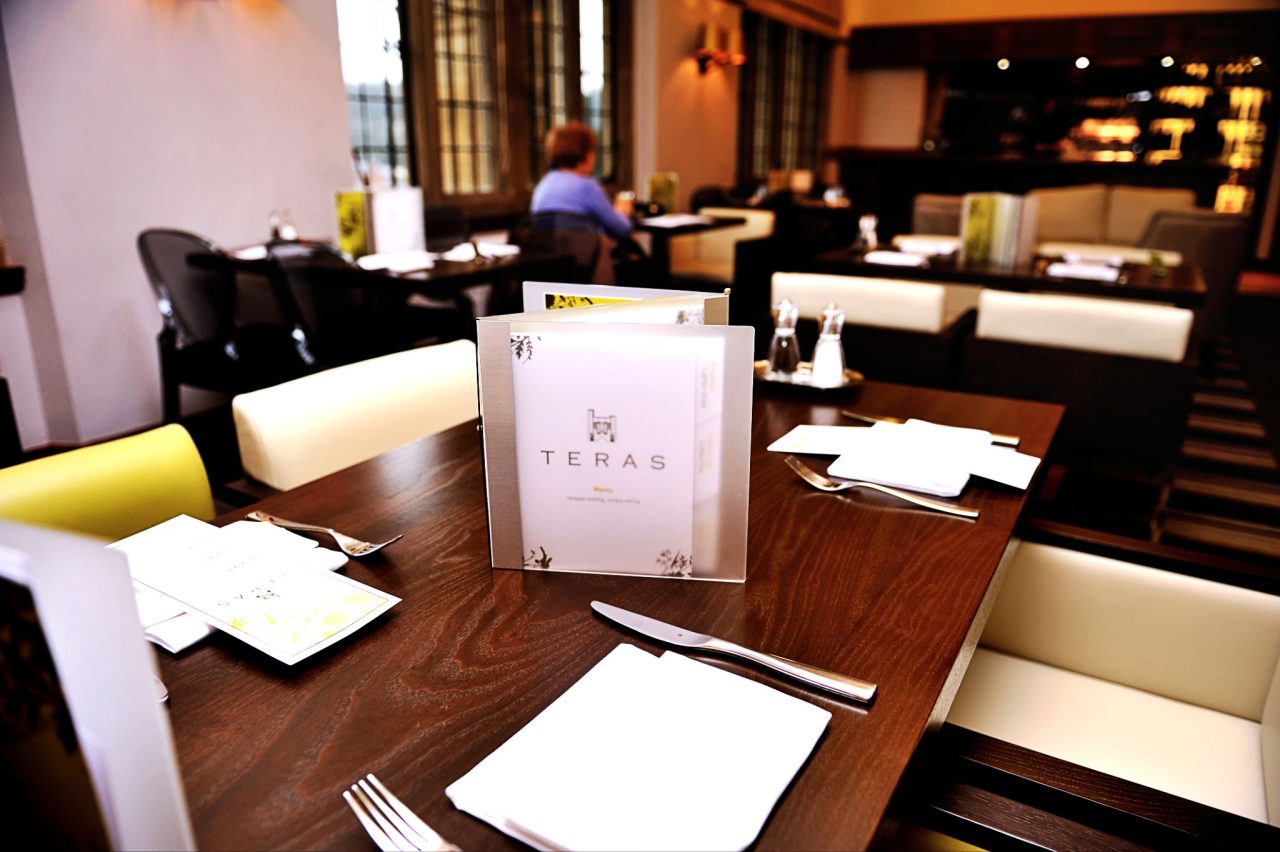 Calling this a restaurant review feels a bit disingenuous because I’m not really sure what Teras is, exactly. On the one hand, the food is essentially restaurant fare but equally, there’s enough scope for it to get away with being a lounge (an extensive list of flavoured waters, coffees and teas are available to be drank on ridiculously comfortable looking chairs) and it’s also a café serving toasties and baguettes. Usually when restaurants/cafés don’t appear to have a definite idea of what they are, exactly, it leads to confusion (think of a really busy pub of people drinking watching football swearing, with a young family pushed to one corner having dinner.) But Teras just works. It just feels right.

This is mainly down to the stunning design, a mixture of contemporary furniture and flashes of green pay homage to the location’s former life as a lecturer/student green room. The room is full of beauty, from the retention of the grade II listed green tiles and bookcases, to the modern seats and comfy chairs, to some striking glass pane dome shaped windows, separating the space from the corridor that has students and staff walking through (this is a really interesting design feature. The glass front to Teras means that it’s somewhere distinctly new and fresh without losing site of the fact that it’s in the university, and is there to be used by everyone. It doesn’t hide itself away from students; its glass frontage shouts at you, ‘come on in’.) Even the menu is a work of art with a trellis of green flowers creeping up the page. It’s safe to say that there was consternation amongst students when the university announced that the much-liked (and used) green room was going to be replaced by a venue that, on the surface, sounded a bit posh and out-of-place. If I’m perfectly honest, I was a little bit confused about who Teras was marketing itself towards before I visited. When I first read the menu, I had doubts whether it was an appropriate replacement for a student-centric common room. But now that I’ve been there, my opinion is drastically different – a combination of really competent cooking, a decent mixture of a really smart but pretension free setting makes Teras something to be proud that’s there for students just as much as it is for staff and visitors

Teras is open from 8am – 6pm from Mondays to Wednesdays and till 10pm on Thursdays and Fridays. They recommend booking for evening meals and I’d go along with this – I was in there for two hours at lunchtime and it filled up to near full capacity. The meal started with a terrine of ham hock and mustard which just lacked the punch of piquancy that you expect from mustard. This was remedied to a certain extent by a Carpaccio of sharp, seasonal beetroot and a salad of julienned vegetables (carrot, green pepper and cucumber) that provided complementing texture to cut through the fatty ham. Ultimately, this dish felt like it was incomplete, short of one element that would make it a real knock-out. Two of the people I ate with had a salmon fishcake with chilli jam which looked like a fair old hockey puck of salmon, equating to very good value for money. Next came a dish of well-cooked sea bream, bubble and squeak and a sauce made up out of salty mussels, all served in one of those slightly awkward bowl/plates that force you to arch your hands in order to get into the dish. This was only a problem because it made picking up the remnants of a wonderful sauce difficult. The portion size wasn’t huge but perfectly understated – it knew it was a good dish and it didn’t need anything superfluous to be so. And finally, there was the stand-out dish – the dessert. The sticky toffee pudding was evidently home-made and safe from the over-bearing rush of sugar that is synonymous with so many toffee puddings. An ice-cream that reached heady heights because of the irresistible fragrance and numbing quality of vanilla was contrasted by a brandy snap that really snapped. Two rather sad looking raspberries were there in an attempt to provide freshness. I didn’t want them, nor did the dish need them. It’s too bloody good to need anything else.

The menu is fixed price – no matter what dishes you order from the table d’ hôte menu, two dishes costs £13.50 and three costs £14.75. The menu is small – three dishes to choose from per course – but this is a good sign. A general rule of thumb is that the smaller the menu, the better and fresher the food. Breakfast items include an omelette with a wide selection of fillings costing £3.00, a sausage or bacon baguette at £3.50 and toast toppers (Mexican, Greek flavoured mince toppings etc, served with salad) all cost £4.75. Of course you’re not going to go for three courses everyday but if you’ve got friends or family visiting, a partner is coming up for Valentine’s day or if you want somewhere to eat over work and chat to classmates, Teras is definitely worth a visit. The great thing about it is its versatility – you could go there in the morning with a hangover and have a sausage baguette before lectures and on the same night, turn up dressed smartly and have a very good, value for money three course meal.

It’s certainly the best meal I’ve had in Bangor and it’s great that it’s in the university. But perhaps the biggest compliment that I can give the food, service and ambience at Teras is that it isn’t just good for Bangor, it’s good for anywhere in the UK.