Annie Houseago has been running the children´s music company Tin Pan Annie Music for more than 20 years, specialising in music therapy, classes and festivals for children under five. For the last five years she has volunteered as a music specialist in hospitals alongside her son, who is a professional musician. Now, save for live streams and one outside festival, most of the activities of Tin Pan Annie have been halted by the pandemic. Instead, Annie used the last six months and her sewing experience to sew countless scrubs and masks for the NHS, and became one of the leading figures of the South London NHS Mask Hub. Annie graciously talked about her experience and motivations with us last week and we’re excited to share her story.

During the pandemic, a lot of medical staff had to switch to wearing scrubs as it was important that they could quickly and hygienically change their clothes throughout the day. From her connections to hospitals, Annie Houseago knew how quickly the supply failed to catch up with the demand. They quickly ran out of surgical masks, too. This is why Annie, out of a desire to help in any way she could, and out of boredom from being home all day, started sewing for the NHS. As did many other people in the UK! The sewing group that she subsequently joined had around 600 sewers at its height, many of them less experienced and quick than Annie and the other “super sewers” but doing their part nonetheless. One of the oldest people sewing was 98 and even though she could only make one set of scrubs per week, “she was just as important.”.   Medical staff has since gone back to wearing normal clothes and many of Annie´s fellow sewers have gone back to work, but Annie and a group of around 40 people are still sewing masks to this day, some of them in their spare time after work.

Now, Annie is proud of the work that the group has accomplished, but there are things she wishes could have gone differently in this crisis. The people who started the project themselves had personal connections to medical staff and knew about the shortages. According to Annie, they were eager to work with companies who could make large numbers of scrubs and masks, but were told that wasn’t necessary by the people in charge of the finances of the hospital. “But on the ground, the nurses and doctors would say they were desperate.”.  Instead of laying off so many people, large factories that already had industrial sewing machines and cutting tables and professional sewers could have been used to meet the rising demand for scrubs and masks, Annie thinks. “There were plenty of offers from people who could make them on a much bigger scale. The number that could have been made was phenomenal. It really was a missed opportunity. (…) No one in government or in the hierarchy thought to do that. We did it, in our own small way!”.

Looking to commemorate and share their experiences, someone in the group, who has a sister who works in the Museum of London, reached out to the museum to make a film. Together with a professional filmmaker and some of the other sewers, who were comfortable talking about their work on camera, they created a short film to be shown in the Museum of London, alongside some examples of the scrubs and masks. 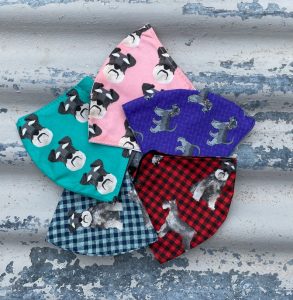 Just one example of the cute masks Annie sells, Photo by Annie Houseago

At some point in time, Annie ran out of donated fabrics. Instead of throwing in the towel though, or slowing down production, she opened up her own Etsy store where she started to sell fun face masks in order to raise money to buy fabric for the masks she donates. Having sewn so many masks already by this point, Annie knew what kind of masks and fabrics were bound to be the most popular. Fun patterns are something she values both in the masks that she sells and in the ones that she gives to the NHS. Wouldn’t we all feel a little bit safer with lots of dinosaurs on our faces? Definitely make sure to check out her store, BugsTogs, if you’re in need of a cute new face covering!

At the end of the day, what Annie and everyone else did is an admirable thing; using their time and experience to help so many people, as well as themselves:

“It gave an awful lot of people some sort of feeling of doing something useful, me included – my whole business suddenly disappeared over night. I´m used to being very busy, not to feeling useless.”

“When I discovered this, it gave me such a sense of purpose, and it did that for so many people – even the people who could only make one (pair of scrubs) a week.”

“It has been amazing and it has just shown me what big hearts people have.”