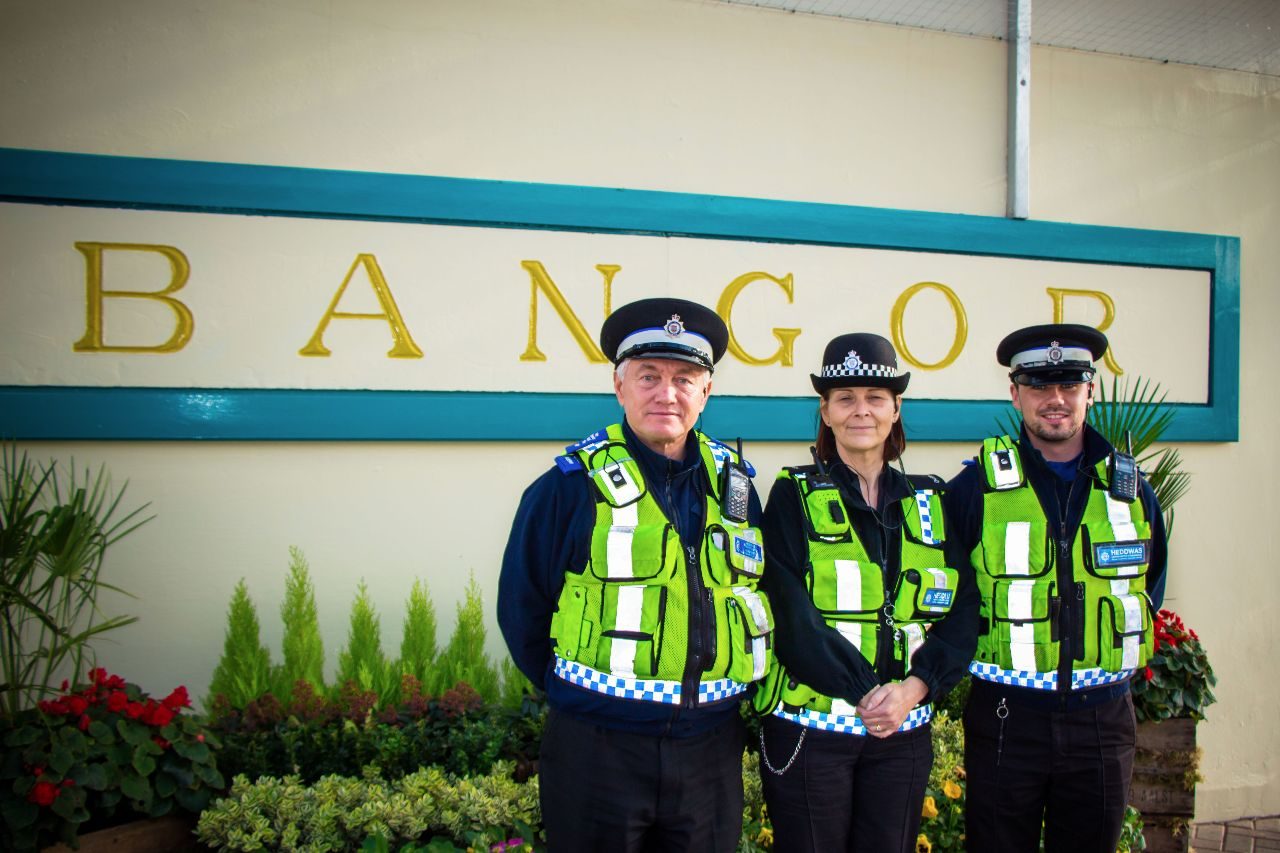 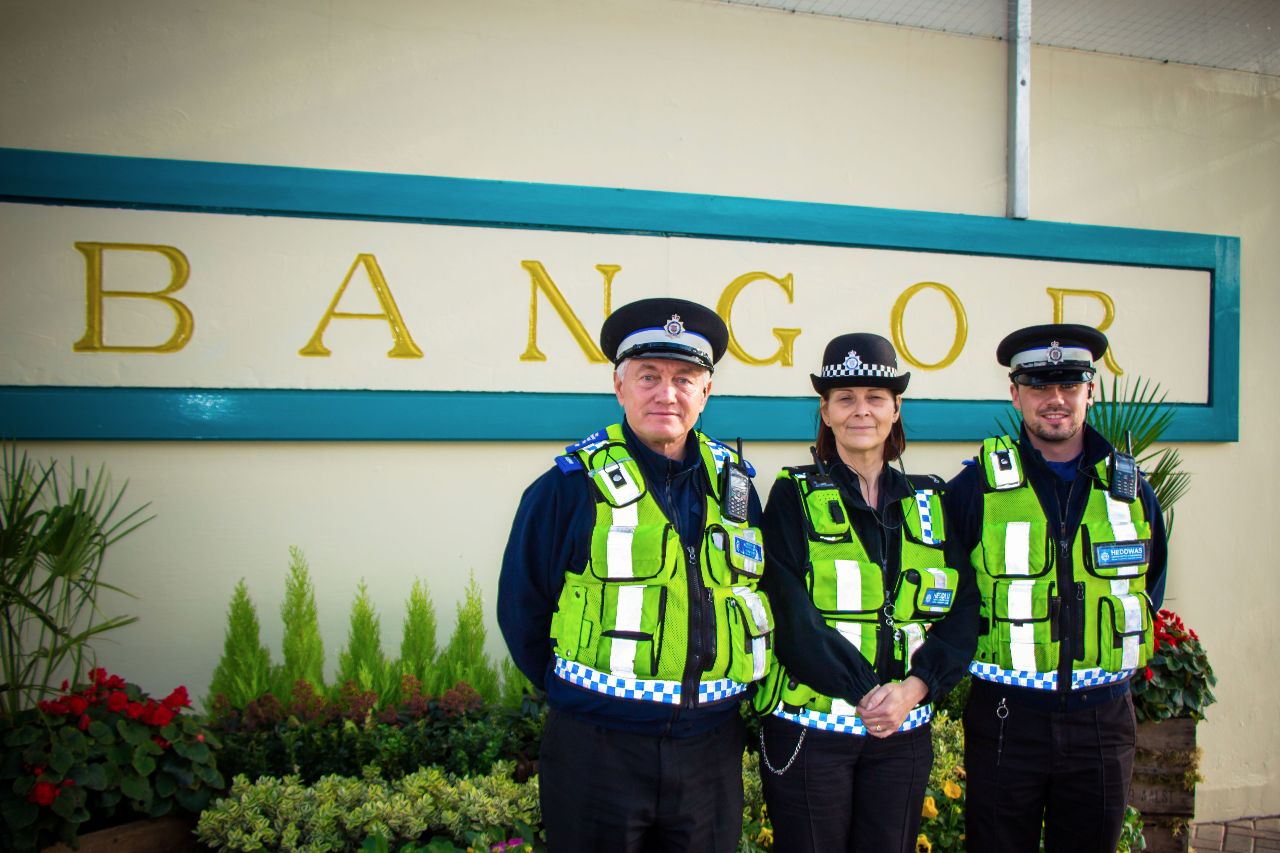 With the UK railway system covering nearly 10,000 miles across the country and over a billion journeys per year, the British Transport Police (the police force specific to the rails) has their work cut out for them. Seren Editor Becki met up with Sergeant Tony Stamp, PC Carol Stamp and PCSO John Steele form the Bangor Team to find out more about how they’re working to make travelling on the railways safer for students.

What is the British Transport Police and what are its main aims?

The British Transport Police is basically the national police force for the railway system throughout UK. Our focus is on all aspects of crime that occur within railway environment, but some key initiatives for the force this year revolve around reducing fatalities and reducing crime overall,  which has been very successful over last ten years, and we’ve set the tough challenge to reduce them again. A particular crime we’re focusing on at this time of year is theft of passenger property, as the first major break back for students to visit families is at Christmas, so they’re carrying all their belongings as well as Christmas presents, so we’re trying to make students aware of the risks of theft. We’re lucky in that theft of passenger property in North Wales is quite low; we would like to make it zero, which is aspirational, but it’s the goal of any police officer to say you can travel from point A to point B without any crime affecting you. We’re also letting the community know that we’re putting on extra patrols around this time of year to deal with theft and the drinking involved with the Christmas festivities

How long has there been a team at Bangor Station and how many officers are there?

There’s been a team at Bangor for a long time, we’re a long standing team. We’re working on increasing the amount of officers and community support officers in our team; as of January, we should be up to full strength with 18 people, including officers, PCSOs and admin staff. We primarily operate out of two stations, Bangor and a satellite police station at Rhyl, meaning we have coverage across the North Wales coastal route.

What kind of issues do you deal with and what kind of problems are you there to prevent?

We’re very lucky in that we have a high visibility on the rail network and a low crime rate in comparison to other networks.We mostly deal with anti-social behaviour, which is a broad term that covers everything from low level offences, such as creating minor disturbances, but can escalate to threats towards staff and physical assault. However these are few and far between, as most incidents are on the lower scale of assaults. The sort of key issues we have are minor thefts and lots of drinking and public order related issues. Serious crime, I’m happy to report, is relatively minor, but we do really want to impact on this and we’re doing a lot of work to continue on from the work we did over summer to stop disruption related issues, such as trespassing on the railway, which is extremely dangerous.

What kind of strategies to you use to prevent these?

We use lots of strategies to prevent crime. We operate very closely with the rail companies, and speak on a daily basis with Arriva Trains Wales, Virgin Rail and Network Rail, as well as having direct communication with their control rooms. We have a lot of high visibility patrols, we have a lot of PCSO’s who are all about community policing, getting themselves seen in the public and being available to them, as well as gathering intelligence about where our trouble areas are. We have a transient community of people that travel on the railways, but it’s broader than that – it includes staff at the stations, as well as the  residents that border railway who have issues with people trespassing in their property, so we’re there to help them too.We’re also doing work with Bangor University trying to put together a DVD focusing on rail safety and disruption issues, to develop a product owned by North Wales and that puts something back into the community, and to give the community the policing service they deserve.

We operate very closely with the rail companies, and speak on a daily basis… with their control rooms.

What’s your biggest issue in regards to students and student safety?

We have two main issues. The main thing is that Bangor is a multicultural society, with students coming in from 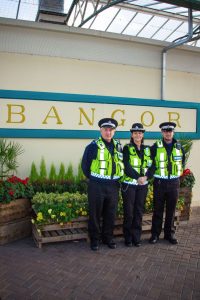 all over the world. This creates barriers with confidence issues surrounding the police, an agency they’ve had little to no contact with in their home country, as well as language barriers. We’re keen to promote that we’re an approachable agency; you can come to us with any issue, we’ll find a way to help.

Another big issue around this time of year is drinking and Christmas celebrations. One of the things that has been the focus of people working in the rail industry has been drunk people on the railway, which has been brought about by an investigation into an incident in Liverpool where a young girl fell between the train and the tracks while trying to board the train while drunk. Firstly, it’s a risk to personal safety, and increases the likelihood of theft, being assaulted, as well as the risk of women travelling home alone. Our focus on these issues means we have more late night train patrols and a physical presence on the trains so people feel reassured, tackling the issue of people feeling vulnerable travelling on their own. What we’ve been doing as a force is trying to enforce the railway byelaws that allow us to prevent heavily intoxicated people from travelling. It isn’t to criminalise people, but they present a danger to themselves, so we’ll turn people away until they can come back a little more sober.

However, the reality is crime is very low in North Wales, especially serious assaults, but that doesn’t stop people’s perceptions because of the media. The physical presence of officers on the train nips a lot of incidents in the bud with the officers just having a word. We don’t want to criminalise people, we’re there to advise you on your behaviour; most people listen and there’s no problem.

Our focus is on being approachable and being there to help; we’re lucky to have some really keen and enthusiastic officers that engage well with the community. We do a lot of work in the community such as speaking with homeless groups and liaising with community support teams across North Wales, as well as school visits and participating in a football tournament. our aim is to prevent crime, it isn’t about criminalising people.

The reality is crime is very low in North Wales, especially serious assaults…

On the flip side, where it’s required, we do deal proactively in incidents where it’s needed, and we’re also supported by an excellent CCTV system.Our detection system is quite good, and we would like to keep crime low and interact with the community to stop it happening in the first place.

It’s increasingly easy to contact the transport police. We have a national freephone number to a 24 hour switchboard, a force and local twitter account, email account, and we’re also looking at a text service. That’s proving popular as we’re finding that people who are witnessing incidents on trains use twitter to contact us live time so they don’t have to speak and draw attention to themselves. We would like the ability for someone to contact us while the incident is happening, so we can make an assessment about what kind of response to give and what the risks are. I’d encourage anyone who sees anything they’re uncomfortable with on the railways, whether it’s drugs or thefts through to inappropriate behaviour, I’d rather people felt free to contact us so we get all the information we need to make this a safe environment for people to travel in.

What are your tips for staying safe on the railways?

We want to stress that the railway is one of the safest forms of transport available to the public, but there are simple things people can do to keep themselves protected:

1. Be aware how much you’re consuming with drink  e.g. make sure your drink isn’t being spiked, be careful about how much you consume

3. Let someone know where you’re going/what time you’ll be back

4. Keep personal belongings close to you when travelling – sit where you can see your bags if you’ve left it in the luggage rack and keep checking on it throughout your journey. Don’t let your defenses down and leave your phones/laptops/handbags on show or leave them on the table.

5. be aware of your environment and where you and your belongings are

6. We’d also recommend you register your belongings on sites such as Immobolise which makes it easier to recover items if they are stolen.

7. Always plan your journey – don’t go out without knowing what time train you’re going to get back

8. Stand where the CCTV is when you’re waiting at the station if it’s late and you’re on your own, make yourself visible. There’s also very good CCTV on trains to keep you safe.

I don’t want people to be getting on trains thinking that it isn’t a safe environment to travel in, because it is. We’ve got some great liaisons with staff working on the railways, and we recover a lot of property that just turns out to be lost or misplaced. Just make sure that you stay safe, stay aware and make sure that you’re not the rarity.

We’re at the station from 8am ‘till midnight, with police officers at both stations with a response capability. After that, the local police would respond, but obviously in an emergency, go for 999. If you need to report something, try texting us, and follow us on twitter where one of our PCSO’s updates it with different events we’re doing.