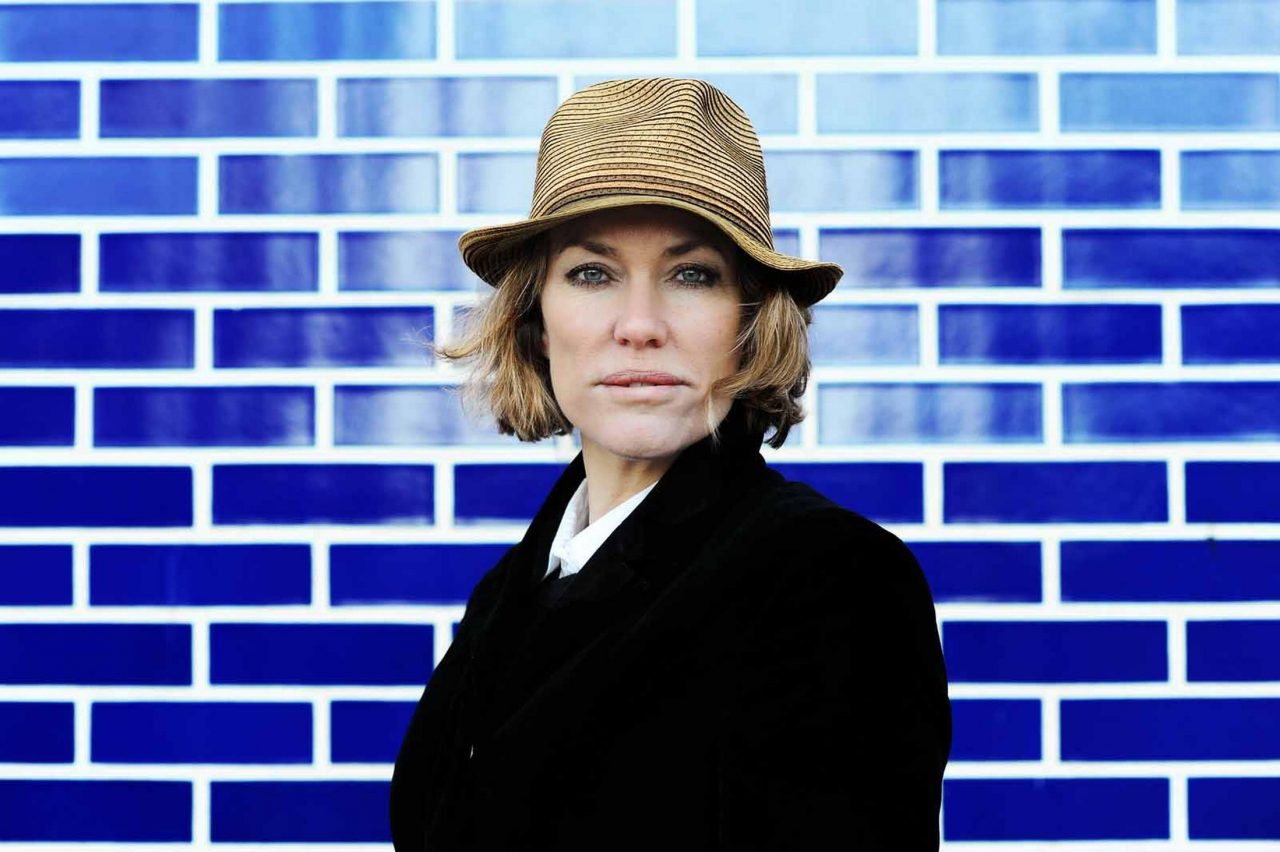 You were here last year playing in Bangor in PJ Hall. How do you enjoy being in Bangor, and what’s it like as a venue?

It’s a big venue and it has it’s own characteristics soundwise because of that. It’s always interesting do a sound check but people come in and change the sound. It has such great character, with all that wood and it’s beautiful, and nice people run it. But more than that I’ve spent a lot of time in Bangor myself, having fun and I have friends living here, so I do love coming back to Bangor.

You’ve released a number of singles and albums with you performing songs in Welsh, including some traditional Welsh folk songs. How important is it to you to stay connected to your Welsh identity in your music?

It’s where I’m from so it informs everything I do, but from the start I collected songs from everywhere, because if you’re interested in your culture then it’s often the case that you’re interested in culture as a whole, and you’ll find that even if you start scratching the surface that most songs are not exactly what you think they are. For example, there’s Moliannwn, which we all know from school, and you think it’s a real Welsh song, but the tune is actually an American tune, which happens quite a lot. As well, there’s House of the Rising Sun, which I think has roots in Welsh folk music and that’s how it goes on, the links are often more interesting to me than the differences. I’ve also been singing Welsh music forever. I went to an English-language Secondary school and I didn’t know many Welsh speakers as I grew up in Swansea, but I dated a drummer called Dicko who was very active on the Welsh language scene, and I would learn to play all the classics on guitar. It’s actually lovely now to record them and play them all over the world and get people speaking Welsh.

Was this part of the idea for your songbook, to preserve these Welsh classics?
It’s not actually about preserving them, i just love them so much and I have so much fun with them and their histories and singing them, I thought it would be good to put them in one book. I’ve been collecting them for a long time, so by putting them in one book it encourages people to make some noise, regardless of whether they’re confident or if they think they can’t sing, it doesn’t matter. Most of the stuff we hear on the radio now aren’t voices anyway, it’s all autotuned, or it isn’t even the main artist singing on the record. It’s just nice in our lives where we spend so much time on our machines to put them down for a minute and make a hell of a noise.

You’ve said in the past that you like music best when you can ‘hear the humans in it’. With advances in recording and technology do you think this is something that’s being lost in music these days?

I think that is the case a bit, but I like the fact that the music I Love the most predates the business of music. We’ve enjoyed music for centuries before there was a huge business, and when you know that people are recording stuff just to appeal to youngsters because they know that they’ll make more money out of them, that doesn’t particularly interest me. I like music for the sake of it, and for the journey it takes you on.

Was this part of inspiration behind your new songbook, ‘Hook, Line and Singer’, to celebrate the collaborative aspects of music?

I think some of the best times you can have is when you’re sat with your family and friends and you’re making a rowdy noise, and you’re not worrying about what you look like or what you sound like, and the beauty of these songs stand on their own no matter what sort of versions you do. It makes you feel good, singing.

As well as this, your music has featured a lot of different genres over the years, from the indie-pop of Catatonia, to folk and ballads in your later work. Does experimenting with different styles keep you inspired as an artist?
Definitely, I enjoy moving on, the idea of singing in the same way for twenty years, I think that would be tough to do. I’ve always listened to different kinds of genres so I don’t even think about it too much, but what’s interesting about recording is that it takes on a life of its own. I’ve likened it to trying to nail a snake to a board; it’ll just wriggle all over the place, you have to let it go and let it find its own way. You can’t pin it down, that would defy the point of it. I like the journey of experiments.

The name is kind of a clue, but what can people expect from your ‘Hook, Line and Carol Singing tour?’

It’s kind of tongue in cheek, and kind of a carry-on from the book. It’s just having fun with music and encouraging people to know that the only mystery to music making is when you stumble, and it often is stumble, across a turn of phrase or a melody that touches you or other people, and how and why it touches you to such a degree is so mysterious, but the rest is just making a good noise, or just noise in general. The whole tour is essentially just making noise with people, so I’ve got people from around the country singing two different songs at the same time, as well as getting people in Derby and Pocklington singing in Welsh.

One of your hobbies that you’ve talked about before is fishing. Who taught you to fish, and have you taught your children to fish?

I have a fishing expert called Dave, who was a fireman in cardiff, who’s taught me fly fishing, coarse fishing and shark fishing, and also took me to Ian Heaps who taught me and my then three year old daughter pole fishing, but it was a bit soon, as she kept touching up the carp that we were catching!

What was the conversation like when you met Bob Dylan?

I’ve met him a few times actually. I think we all have something to do on this earth, so I don’t usually take heroes, but I just think he is extraordinary, both as a song collector and an artist. It just goes to show now that he’s having major world hits in his 70s, with the likes of Adele covering his songs. He keeps surprising you as well, with releasing a Christmas song like ‘Must be Santa’, you wouldn’t have thought a few years ago that Bob Dylan would release a Christmas song. He’s just incredible, but i’m not gonna tell you exactly what we talked about!

You sing songs in Welsh and in English, which is something people really love about you, but do you prefer one language over the other?

I actually sing in French on the tour, as well as Spanish and German, so I just love languages. But the Welsh language is just so beautiful, and the songs are so exquisitely written, like ‘I’m not going to love you until the two sides of the shores meet’. It’s also a great feeling to be singing in Welsh to a Welsh audience, and Bangor is the first Welsh gig on my tour, so it’ll be amazing.

What was it like performing with someone as wonderful and influential as Tom Jones, who’s also a fellow Welshman?

He’s still the best singer I’ve sung with by miles, he’s such a natural musician, and a huge music fan himself. We have very similar tastes, so it’s always great to meet up. But to sing classics like ‘Baby It’s Cold Outside’ and ‘What’s New Pussycat’ with him was amazing, he’s just incredible and a lovely chap.

In many ways, Catatonia was the soundtrack to our youth, so what kind of music did you listen to growing up?

A lot of Bob Dylan, my father was a fan too, as well as Billie Holliday and jazz. I grew up in the 80s, so my sister was listening to Wham and Duran Duran, but I didn’t like the sound, the production, although I liked David Bowie a lot. I’ve always liked not just current music, but whatever you can find, i’ve always looked and listened and loved.

Is there a current band you’re enjoying listening to at the moment?

I love White Denim; they’re not quite experimental, but they’re shifting around, and you can hear them trying to keep thinking and doing things that aren’t straight forward. What I can’t bear is when you hear bands that keep banging on with one idea, it’s just not interesting to me. But that’s the thing about music, it’s subjective, and it’s other people’s cups of tea, and that’s great.

This has been a pretty busy year for you, from performing  in the BBC Proms, your work with Radio 6 and your new book, but what can we expect from you in 2014?
We have the Dylan Thomas centenary coming up, so there’s a few documentaries I’m involved with for that, but on the whole, I feel like I want to do some gardening. It’s been quite a mad year, and I haven’t gardened in ages. I bought a house now that we move into at the end of the tour and it’s got a little tiny garden, I can’t wait to put rhubarb in it and a barbecue!  There’s also my radio show, which is my baby, cos i just love programming that with so many beautiful, mad different genres and recordings.

Have you ever had a nickname? Squeaky, because my voice is high

Favourite movie? Any of the old classics, like Casablanca or Place in the Sun

Three items you’d take on a desert island? an instrument of some kind, chillies and a huge tome of books, like Shakespeare

Can you spell the full version of Llanfairpg? I can say it, and sing it!

What would you wear to Seren’s 90s night? I used to kick against what was fashionable in the 90s, so I’d wear a gold Stetson and this silk green Chinese tunic that I used to wear. If you’re going to do 90s, go crazy!