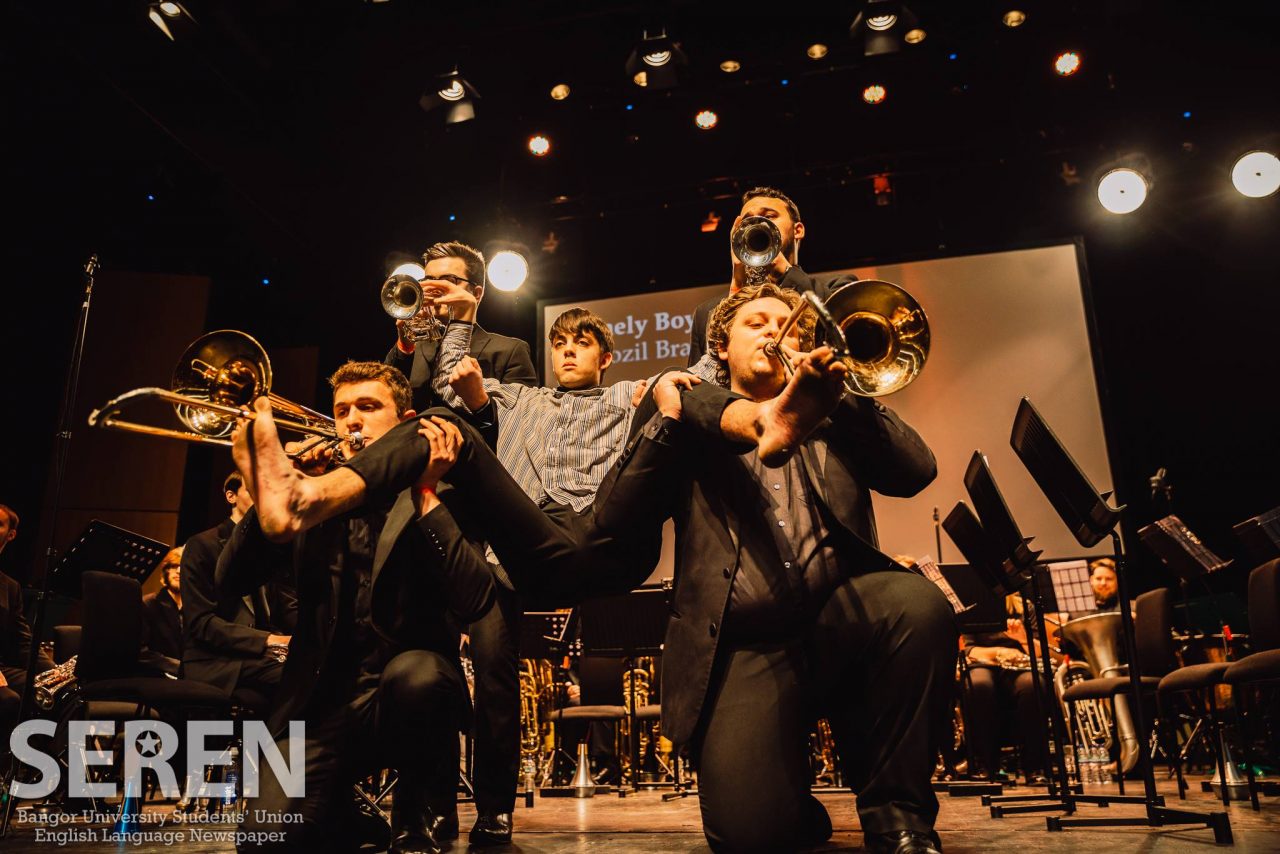 On Saturday 2nd February, 767 students from 21 bands arrived from around the country to participate in the premier event for University brass banding. This was the first time UniBrass has been hosted in Wales and it was masterminded by Chair and postgraduate Marine Biology  student, Sam Hartharn-Evans. The competition was split across two stages with Pontio’s Bryn Terfel Theatre hosting the Trophy bands and the Shield section taking place in Alun Hall. As the morning wore on and many bands arrived in Bangor for the first time, the trek from outside Pontio to contest control situated in the Music building became a common talking point. Fittingly this experience gave the bands a crash course in the charm of Bangor University’s setting as the Coleg ar y bryn.

The Trophy section began with the Royal Northern College of Music hoping to defend their title of the previous two years (hosted in York). Their theme, ‘Myths and Legends’, incorporated Tale of the Dragon (Paul Lovatt-Cooper) and Mephistopheles(Shipley Douglas). With the kind of technical poise and showmanship you would expect of some of the country’s top young brass players, the RNCM’s set was a strong start to the day. For those not acquainted with UniBrass’s recent history, the rivalry between the RNCM and Royal Birmingham Conservatoire has been brewing at the top of the Trophy section. Birmingham Conservatoire’s set incorporated complicated and entertaining choreography, particularly in Mnozil Brass’s Lonely Boy(which involves one player playing trombones with his feet and trumpets with his hands), along with a showing of outstanding virtuosity in the Euphonium section spotlight piece,Bravura by Peter Graham. It is justified that, while the RBC took away individual awards for Best Section, Best Percussion and Most Entertaining, RNCM took away the top prize by one point (144 to 143). Sets from Huddersfield, Birmingham (who had a massive 55 players), Nottingham, Manchester, Warwick, Leeds, Durham and Bristol rounded out the Trophy stage.

On the Shield stage, it was Nottingham Trent University who started the proceedings after Cardiff University’s band was delayed. While the Shield stage is just as hotly contested as the Trophy stage, the atmosphere of the bands is often one of community spirit and enjoyment and can often lead to a very enjoyable fight right the way down the rankings. The bands are often made up of people who have taken on brass banding as a source of social engagement both at university and at home. Chichester University, who came third in the previous year’s Shield section, put on a strong showing and took away prizes for the Best Soloist, Best March, and Best Section as well as also winning over the University of York (128 to 127). Bangor University’s own brass band, conducted by Phoebe Swallow and Thomas Whitcombe, put on an exciting performance including third year music student Thomas Larcombe’s work In the Shadow of Mountains. The section was rounded out by Cambridge, Keele, Sheffield, Oxford, Lancaster, Cardiff and Southampton. UniBrass will return to Bangor next February and will be looking for volunteers to help put on this prestigious event so keep your eyes peeled.