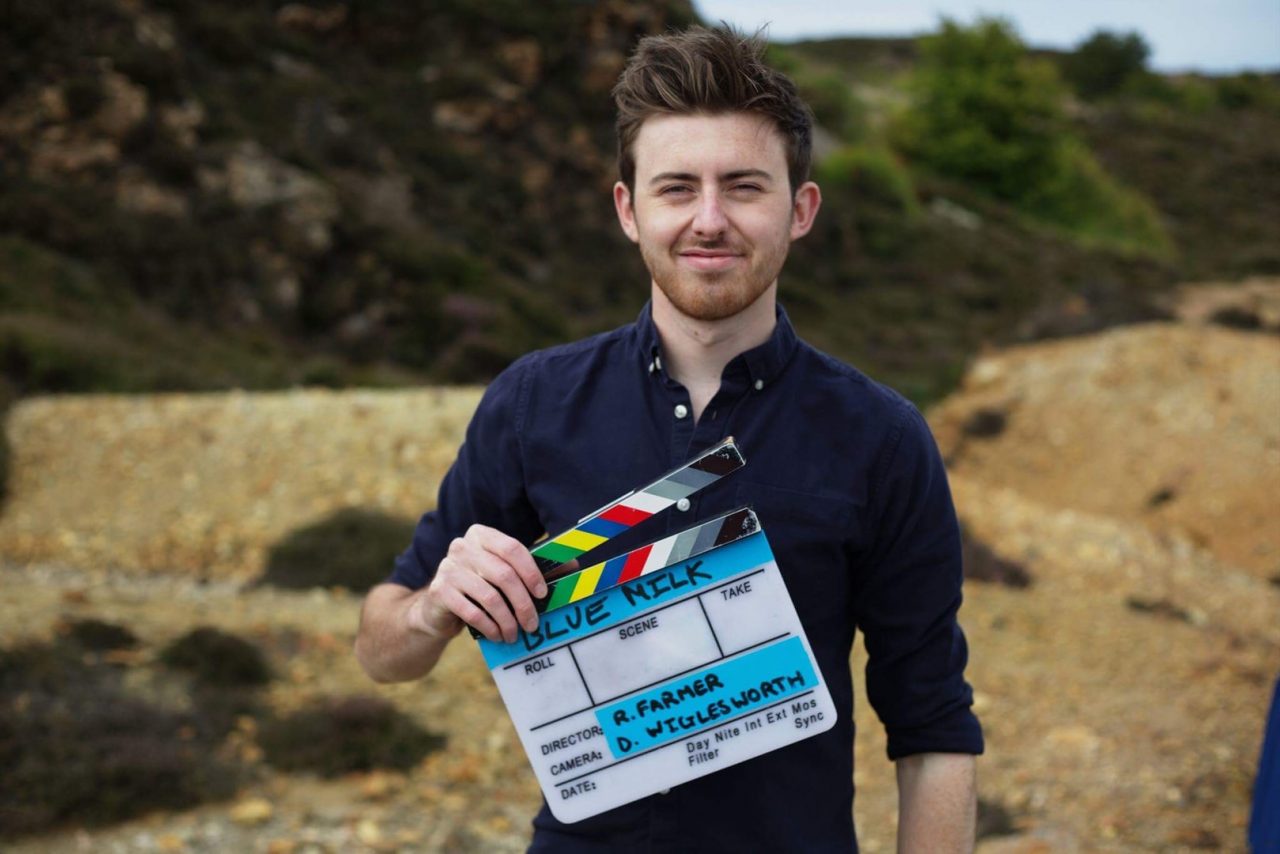 For those who don’t know you, tell us about yourself and your links to Bangor?

Hi, my name is Rory Farmer. I studied both my BA in Creative Studies and MA in Filmmaking at Bangor University. Since then I’ve also been lucky enough to teach for the School of Music & Media for a semester and currently work in the local television industry, so I’ve got really strong roots here in Bangor.

You studied the Filmmaking MA here at Bangor, how crucial was it to progressing as a filmmaker?

The MA in Filmmaking was so vital in preparing me for the ‘real world’. There’s no one route into the film and television industry, and the MA was really great at moulding me into an all-round, independent filmmaker. We don’t necessarily have the same money and resources as some of the UK’s big film school’s but the benefit of that is the tuition here is really individual and tailored. Joanna who runs the MA is such a brilliant mentor too, and she continues to help me out and take an interest in my career now. I can’t speak highly enough about the course.

The film which came from that was ‘Blue Milk’ – how did the idea come about?

So Blue Milk is a ‘mockumentary’ film about a travel agent called Joe who gains the mysterious and useless ability to turn things blue, and whilst it’s all fun and games to start with, he soon begins to realise that this is going to hinder his daily life. It was kind of a spin on the Midas touch, and really focussing on how the character deals with these drastic and comical changes in his life. The story stemmed from a real life incident in a bar I worked out, obviously no one got turned blue, but I took inspiration from an odd customer that made me laugh and then over the course of a year, it evolved it into this.

Were you given full creative control on the MA?

Well actually there was a lot of focus on writing and making films with restrictions, and although that has negative connotations, I found that it actually forced you to be more creative and think of different alternatives. We often worked around specific themes, or using limited locations or props. When it came to making Blue Milk as part of my final project, the creative freedom was entirely in my hands. But I think working under restrictions actually prepared me better for being able to do that, I was more conscious of the financial side of things. The nasty part of filmmaking that nobody really wants to talk about!

You’ve been to various film festivals with ‘Blue Milk’ over the last few months – how’s it been for you?

Taking the film to festivals is the absolute best experience, getting to show your movie to an audience is simultaneously the most terrifying and exhilarating experience, but it’s all worth it for a great reception. It vindicates all the hard work that you and your team have put into the project because it often takes months and sometimes years to put a film together. We’ve been really lucky to be able take Blue Milk across numerous festivals in the UK, and we also got to take it to a brilliant festival in Austin, Texas! Part of the joy of that was getting to go and visit in the States, which was actually my first time there! It was interesting to see how the British humour would translate but I couldn’t have hoped for a better reaction, plus we got to take home the award for ‘Best Mockumentary’! I think you have to enjoy it and own it every festival your film gets selected into because what people don’t see is how many times you get rejected by festivals along the way too!

Did you think whilst you were making ‘Blue Milk’ that it had potential for the success it went on to achieve?

There were massive ups and downs throughout the project, which is completely normal, especially when you consider it took the best part of 18 months to make and you’re so invested in it! I think it’s worse when you’re making comedy, because you’ve heard the jokes over and over again, and things suddenly stop being as funny to you. Which really doesn’t help when you’re editing, and struggling to work out which parts the audiences are going to enjoy. When we got it to the final cut of the film, I had hoped we’d manage to take it to a festival or two, but to have enjoyed the success that we’ve had has been unbelievable. I’m so grateful to all the festivals that accepted us, and to the hard work of the cast and crew who gave everything to bring it to the screen.

Notably, key actors and crew members in ‘Blue Milk’ were from Bangor University – was it important for you to do this? How much talent is there in Bangor?

It was really important, by comparison to a lot of film schools Bangor is a a lot smaller in size, so collaboration within the brilliant talent we have at the University was key for me in putting together both the cast and crew. It’s all about networking and I can’t stress that enough to student filmmakers, months in advance of Blue Milk I was visiting BEDs plays to sieve out acting talent and I was working with Film Society to see who would be capable of doing a good job on Blue Milk. Further afield, I’d already started networking with music students and that developed into a great collaboration with James Gair who made this incredible, funny, original score that we have on Blue Milk. Bangor University has always had a strong field of filmmaking talent too, we’ve the likes of Osian Williams who’s short film won a BAFTA and Mat Owen who also toured his short film ‘Turn On’ all over the world. So I think it’s important to highlight that despite our size and resources, we are competing on a professional level with some of the top Film Schools around the World.

You also were in FilmSoc in your time at Bangor University – what impact did that have on your Filmmaking?

So I was part of a team that took on FilmSoc in 2015 and rebranded it to make it a hive for filmmakers who wanted to get together and make films. I found during my undergraduate studies that I wasn’t as satisfied at the time with how much film production I was able to do, I felt a bit more stuck in the theory, so this was a place I could go and work on films and really cut my teeth in the craft. But I think the beauty about it is the fact that we had people from all sorts of degree backgrounds joining us, which made it very different to being in a class room. It meant that we had Psychologists that were interested in writing screenplays for the first time, so sharing knowledge between the two disciplines was a really fulfilling thing to do.

Tell us about your upcoming project?

My next short film is a really ambitious project and we’re aiming high with both the concept and our hopes of where the movie might be able to go. It’s a Science-Fiction/ Western hybrid set in the distant future and on a faraway planet, and it follows the story of a grieving Father who has to turn to bounty hunting in order to pay for his son’s tuition. It takes a lot of the contemporary societal issues we have today, and explores them in a really detached way. Though at it’s heart it’s a story about grief and morality. We’ve got some brilliant actors attached, and I’ll be collaborating with Byron Dean once again in the lead role which I’m looking forward to. We’re currently in the process of crowdfunding for the film, we’re attempting to raise £2000 which is there to pay for much of the art department and the casting in order to make this film my best to date! If you’re interested in finding out what we’re up to, check out www.longinthetoothmovie.co.uk for more information!

Has your time at Bangor encouraged you to pursue Filmmaking long-term?

It definitely has, I’ve always loved the cinema and nothing beats seeing your film on the big screen. I think you have to have a good balance between realism and optimism, it is a really saturated market to crack and getting in the film industry is notoriously difficult. For me, I’ll keep plugging away at my own films and trying to get them seen, and then with some luck we’ll see where we are later on down the line.