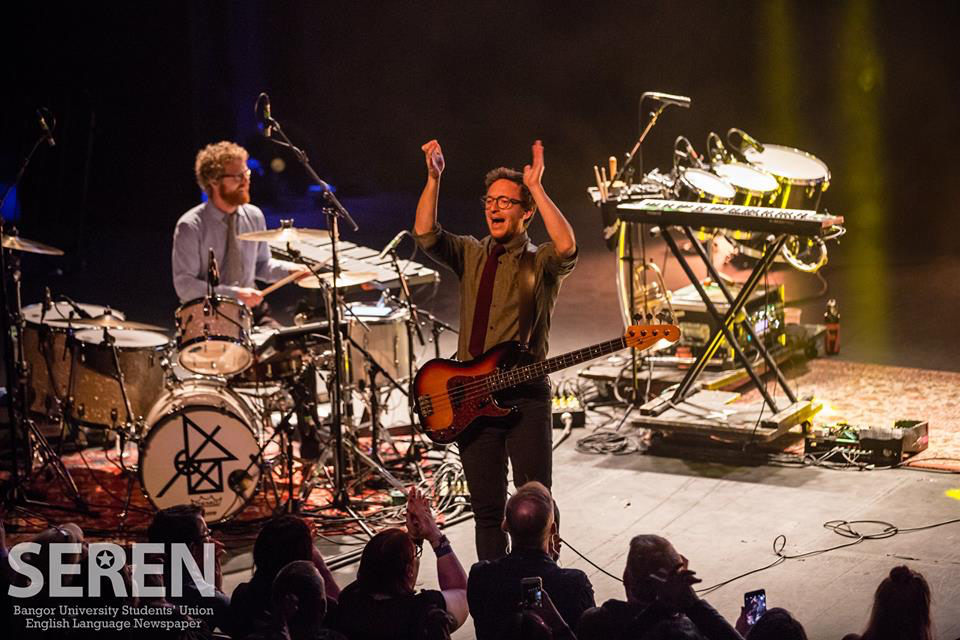 Public Service Broadcasting’s show in Pontio was a part of a line up of five intimate shows around Wales prior to their final UK performance at the Royal Albert Hall. The shows acted as a final farewell to their latest album ‘Every Valley’, and it was not a night to disappoint.

Opening the night, Cardiff-based indie electronica group ‘Dead Method’ treated the audience to the rich vocals of frontman Lloyd Best. Playing tracks from their self-titled EP, ‘Dead Method’, they commenced the evening with their dark and gritty beats, adding a new, refreshing feeling to the world of electronic music. ‘Hollywood Harmony’ was a particular highlight, as it pounded a much-needed ripple of energy into the room to get the party started.

Performing ‘Every Valley’ in Bangor felt like a special, momentous night for everyone in the community. The album narrates the struggles the mining industry in Wales tackled in the 1980s, guiding the listener through the trials and tribulations that Welsh communities faced. Whilst the trio are born and bred South Londoners, the emotional connection they have with Wales is indisputable; most of their research for the album came from the archives of the Wales Miners Library in Swansea and the recorded their album in Ebbw Vale, South Wales.

The juxta-position of a story of Welsh working-class history performed by three tweed-covered middle-class southerners only added to the overwhelming strength of honour the audience were feeling- a sense of understanding that has been long missing for these mining communities felt somewhat rekindled by the sheer power of Public Service Broadcasting’s performance. The powerful visuals accompanying the music was enough to bring a nostalgic tear to one’s eye. The performance of “They Gave Me A Lamp” narrating the role of women supporting the strikes was a perfect example of this. The heart-wrenching melody supported by the footage filled the room with an emotional strength, as the audience are taken on such a moving, and provocative journey.

But without a doubt, the highlight of the evening was the beautiful collaborative performance of ‘You and Me’ with Lisa Jen Brown. Lead singer of Welsh band 9bach, her ethereal voice transcends around the theatre, complemented by a gentle acoustic guitar. The visual representation of two communities uniting created such a unique and special atmosphere. It felt like a true honour to be a part of it in that moment.

But in true Public Service Broadcasting style, the evening was not to end on such a gentle slope. ‘Go!’ a cult favourite of PSB’S fans, zapped a new level of energy to the performance. Wrigglesworth pounded out the fierce rhythm on guitar, J. Wilgoose Esq handled the synths and JF Abraham on bass, whilst dancing astronauts took to the stage and absorbed the audience into a funky, cosmic frenzy. To end the show ‘Gagarin’ propelled a nerdy brass trio onto the stage, creating the perfect ending to the show.

A multi-sensory visionary with the right amount of excitement and nostalgia. It would be an honour to see Public Service Broadcasting return to North Wales one day.