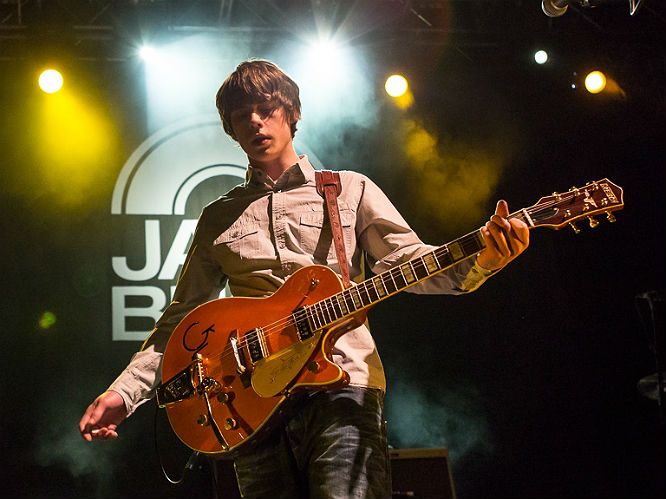 Here at Seren we like Jake Bugg. Avid readers of these music pages will remember we gave his debut album 5 Serens back in October, and it sounds as good now as it did then. It seems that it isn’t just Seren that likes Jake Bugg though – its everybody. This can probably be attributed more to the sycophantic overplay of ‘Lightning Bolt’ by Radio 1 than the universal appeal of his album, and this in turn has generated an… interesting following at his live shows. I’m not quite sure what the crowd at the Manchester Academy was expecting; half of those attending would have found more entertainment at Occy (sorry, PeeP) on a Saturday night, where the pints they’d be chucking would at least be cheaper than Academy’s inflated gig prices.

For those devoted music lovers in the crowd Jake was a treat, moving from song-to-song with the refinement of a far more experienced artist, and the buzz around this particular 18 year old is more than justified. His live show takes the majority of his album and improves it immeasurably, which is no mean feat given its quality. The show opener ‘Fire’ benefits from the removal of the post-production record crackle and iPhone recording, and the ‘Ballad of Mr Jones’ features a sublime guitar solo that isn’t present on the album, with Bugg stretching the clean, bluesy tone of his Stratocaster like a true professional, harking back to a more affluent time for guitar music.

A short encore culminated with a cover of Johnny Cash’s ‘Folsom Prison Blues’. Aside from the crowd, this was the only real downer of the set – fans of the Cash biopic Walk The Line may remember June describing the Man in Black as “steady like a train, sharp like a razor”. Bugg’s delivery of the song is neither, and lacks Cash’s deep southern baritone and snarling enunciation. The strength of Bugg’s own material would close any set well, and the cover is somewhat unnecessary.  As with his debut album, what strikes most about Jake Bugg is the maturity of his music, and this was only more evident at the Academy: the future is bright for this young star.