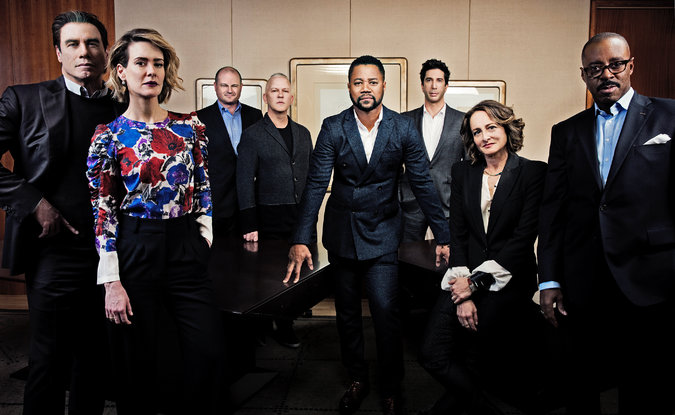 It was THE news story of the 90’s. The OJ Simpson trial was watched by millions of Americans when it was televised in 1994. I was too young to remember it but everyone knows the story of the former American football player. OJ ‘The Juice’ Simpson was accused and stood the trial for the killing of his ex-wife Nicole Brown Simpson and her friend Ronald Lyle Goldman. The television adaptation is based on the book The Run of His Life: The People v. O. J. Simpson by Jeffrey Toobin and boasts an A-list cast: from John Travolta to Cuba Gooding Jr as OJ and David Schwimmer as Simpson’s family friend Robert Kardashian.

From the creators of American Horror Story and Glee, it’s frustrating to see the use of the same actors. Sarah Paulson and Connie Britton play significant recurring characters in American Crime Story, but they also appear in American Horror Story, making it rather confusing if you were to explain it to anyone, considering the similar title.

The plot is laughably unfaithful to the actual events. If you are unaware of the actual trial, maybe Google it to learn the real story, instead of watching this programme. There’s a preposterous scene of the Kardashian kids chanting their surname, whilst watching their father on the TV, evidently making a mockery of the socialite family, which is both hilarious and quite sad. Khloe Kardashian even appeared on The Late Late Show With James Corden to separate fact from fiction.

Nevertheless it is entertaining to count how many times Schwimmer shout ‘Juice’ at Gooding Jr. I’m serious, there’s even a video compilation to prove it. So if you are looking for mindless addictive entertainment, tune into The People vs OJ Simpson: American Crime Story on Tuesdays at 9pm on BBC Two.