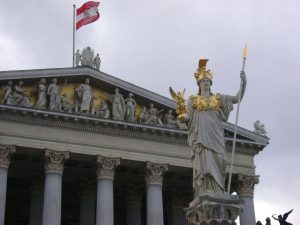 The Austrian capital, Vienna -“Wien” in its target German language- has a City Airport Train (‘CAT’) service to take passengers from the airport and directly into central Vienna. A ‘CAT’ return ticket is cheap at €18 and valid for one month.

Vienna is a city that changes in character as you traverse through it; some quarters are Florentine in ambience and architecture, others look extremely Eastern European, others remind tourists of Edinburgh or York and some, more modern, Viennese areas heavy in Victorian decor resemble London. Most of Vienna’s buildings are so beautiful they can be appreciated externally, such as the ‘Rathaus’ and the Theatres. The Austrian capital is rich in museums, notably the Jewish museum and film museum, and these have affordable entry fees.

The Hofburg was the Habsburg’s –the last Austrian royal family- summer residence. The building itself is breathtaking, especially by night, and its impeccably-kept Gardens house several statues, including one of Mozart. The Hofburg itself holds regular art and museum exhibitions, and the entry fees are always student friendly.

The ‘Stadtpark’ is on the banks of the Danube and boasts a statue of Strauss and a clock face comprised of flowers in bloom. Near the ‘Museumsquartier’ is a formidable statue of Empress Maria Theresia. It, (perhaps) surprisingly, bares much resemblance to the statue of Queen Victoria in The Mall in London.

Tourists and pilgrims alike flock to visit the Viennese central focal point Saint Stephen’s Cathedral. It was visited by Pope John Paul II and there is a plaque inside to commemorate his visit, as well as some beautiful paintings.

The ‘Haus am Mozart’ is worth a visit whether you enjoy music, history or both. Although born in Slatzburg, Mozart moved to Vienna to write and perform music. That house was a site of his musical artistry and gambling and debauchery in equal amounts. The audio tour describes the mystery surrounding the composer’s death. A (non-musical) note written by Mozart’s own hand survives to this day It has turned pink with time and is housed in the ‘Haus am Mozart’.