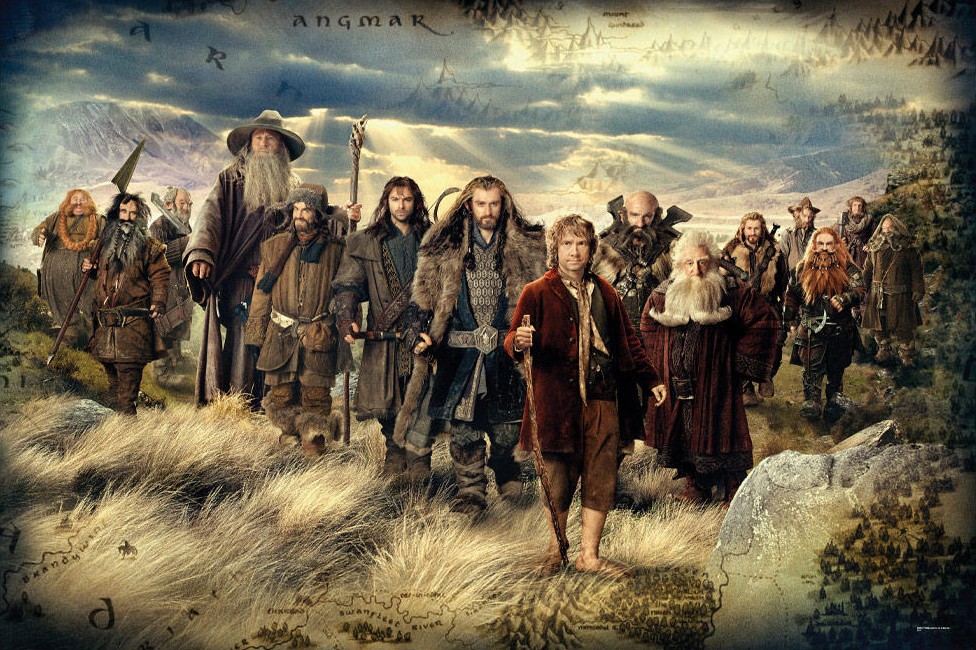 “Far over the misty mountains cold, to dungeons deep and caverns old” lies another mountain. The Lonely Mountain, the mountain under which this Unexpected Journey begins.

The Hobbit sees Peter Jackson’s long overdue return to Middle Earth in a tale packed with more laughs, more dwarves and a lot more mischief than the Lord of the Rings trilogy combined.

Set sixty years before the multi-Academy Award winning trilogy, The Hobbit is the story of Bilbo Baggins’ (Martin Freeman) very own adventure. Bilbo lives a happy, and simple, life in Bag End. He’s a well to do hobbit who has a strict no adventures policy. That is until the wizard Gandalf (Ian McKellen) decides to change it. Twelve dwarves, a tonne of food and a contract later Bilbo is leaving the Shire to help the dwarves reclaim their home, the Lonely Mountain, from the dragon Smaug. In the company of Thorin Oakenshield (Richard Armitage), Bilbo and the dwarves find themselves on the run from Orcs, encountering trolls and before the Goblin King.

Shot in a controversial 48 fps (frames per second), the film wastes no time fully immersing the audience in Middle Earth, the lavish halls of the Lonely Mountain explored through Jackson’s swooping camera style before being destroyed in a very Tolkien-esque dragon attack.

With the decision to split the book into three films, a certain amount of padding out has had to happen. This is not, surprisingly, a bad thing though and for the hardcore Lord of the Rings fan is more of a blessing.

A nice nod to the LotR franchise, the Hobbit brings Ian Holm’s Bilbo back to the big screen as he begins his story. The prelude, which perfectly leads into the Fellowship of the Ring, also sees the return of Frodo (Elijah Wood). It is the story of the Lonely Mountain that truly takes precedence over everything else however, in the opening sequences of the movie. Narrated by Holm, and reminiscent of the LotR opening, it is Jackson’s visual storytelling at its best.

It was a combination of Tolkien’s genius and Jackson’s translation of it to screen that made the Lord of the Rings trilogy such a success. With the Hobbit a little more has been left to the imagination of the writers, a task they have tackled head on with the passion and heart of the Rohirrim.

Whilst it does take awhile for the company to leave the Shire, a swifter departure wouldn’t have done the vivacious bunch of dwarves justice. It is their musical tendencies that help you strike up an instant respect and liking for them; one minute they are singing sorrowfully of their lost home, the next tossing pots and plates around the small hobbit hole because “that’s what Bilbo Baggins hates!”

Though you probably wouldn’t recognise them behind the beards, the thirteen dwarves showcase some of the very best of British talent. Richard Armitage is of course fantastic as the stoic leader of the pack: Thorin. He is the Aragorn of the Hobbit, with a duty to his people that he will give his all in order to see his friends once more under the mountain. Armitage commands the authority deserving of Thorin but with a look in his eye that tells us how much love he has for the twelve dwarves brave enough to accompany him on this impossible task.

James Nesbitt is just about visible, if you look really hard, as to-the-point Bofur and Being Human’s Aidan Turner seems to have skipped beard rehearsals as the youthful Kili. His brother, and comedy counterpart, Fili is played by New Zealand born actor Dean O’Gorman who stepped in last minute when ex-Eastender Rob Kazinsky had to leave the project. It was a shame to see Kazinsky, an actor with a lot of prospects who I’ve been following for a number of years now, leave due to health issues. O’Gorman however is looking good with a pirate like braided beard and that’s enough for me. He also has that mischievous twinkle in his eye that Fili and Kili could not have gone without.

With so many dwarves it’s difficult to give a lot of screentime to each, leaving little time for character development. Perhaps with two more movies to come they’ll each get their chance.

The dwarves of course play an integral role in the narrative but where would they be without their ‘burglar hobbit’ Bilbo? (probably in the stomach of a troll)

Casting the role of the iconic Bilbo was no hobbit sized (small) task. Unlike the Lord of the Rings there was no escape from the pathetic whining of their leading hobbit through the use of a hundred other storylines. And so when it was revealed that Martin Freeman would fill the shoes – or rather, oversized hobbit feet – of Bilbo it was to mixed responses. The Brit, known for his roles in The Office and Sherlock, has absolutely nailed it. There’s something very British about his portrayal of the once snooty Bilbo but rather than annoying, as I found Elijah Wood’s Frodo, he’s loveable. Freeman’s comedic timing works a treat in the pre-ringwraith days of The Hobbit and Bilbo’s development is executed beautifully by him.

One of the most exciting things about The Hobbit is that it offers the return of some familiar faces. Not only do we see old Bilbo and Frodo but Ian McKellen returns as the mysterious wizard Gandalf, the catalyst for Bilbo’s adventure. (Frodo’s too I suppose)

In the heart of Rivendell the companions are greeted by Lord Elrond (Hugo Weaving) and The White Council sees a return from the Lady Galadriel (Cate Blanchett). There’s also a surprising reappearance from Christopher Lee’s Saruman. Though it is impossible to watch the scene without glaring at the white wizard with hatred and disgust as he is corrupted by Sauron before your eyes.

The award for the most anticipated returnee, and scene, unsurprisingly goes to the brilliant Andy Serkis as he reprises his role as Gollum. (or Smeagol. Or both)

Riddles in the dark, perhaps the most iconic of Tolkien scenes and the only appearance of Gollum in The Hobbit, lives up to the hype. With Lord of the Rings the team were basically making up motion capture technology as they went along but with The Hobbit they have been able to take advantage of technology advancements. Gollum is looking better than ever and Serkis delivers both the terror and the pity of the strange character with ease.

The ten minute plus scene was one of the very first to be filmed. It left Freeman not only with the challenge of keeping a straight face whilst being threatened by a skintight mo-cap suit clad Serkis but of discovering the character of Bilbo. It is one of those things that you have to see to believe but Riddles in the Dark is easily the best scene of the film, and that’s saying something because The Hobbit is full of amazing moments.

Despite the lengthy runtime and a questionable creative choice when it comes to mountains fighting with each other, The Hobbit was my movie of 2012. It’s a shame to see it gain so little Oscar nods but there’s still time, afterall it wasn’t until Return of the King that LotR truly sweeped the awards.

A lot of footage in The Hobbit wasn’t really needed for an accurate retelling of the classic tale but the backstories and Lord of the Rings callbacks have created a brilliant adaptation.

I, for one, cannot wait for The Hobbit: The Desolation of Smaug and just maybe I will have gotten around to finishing the book by the time it comes out next December.