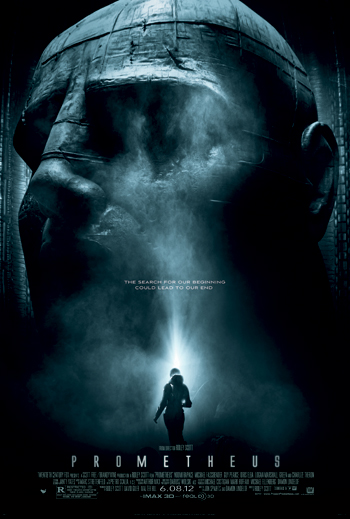 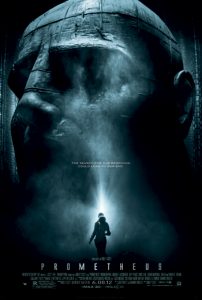 The film is set in the late 21st century and the story focuses on the crew of the spaceship, Prometheus as the crew follow a star map discovered in the remnants of several ancient Earth civilizations. Led to a distant world and an advanced civilization, the crew seeks the origins of humanity, but instead discovers a threat that could cause the extinction of the human race.

Prometheus is a very complex film and is sometimes hard to follow. There is a main story there but at times things happen and it is hard to fit them in to the story that the audience is supposed to follow. In parts the cast are strong and give great performances but in parts they are weak. Asking people to do a different accent to their own can be challenging and it come across in this film. Prometheus has a run time of 2 hours and 4 minutes but it feels a lot longer.

In all honesty, the production of the film is probably the best aspect of it all. I had the chance to see it in IMAX 3D and it was a great experience. It looked great and was amazing to look at and it will undoubtedly look good on Blu Ray. In terms of 3D, there is about 5 minutes at the beginning of the film that are really worth seeing but that is about it.

Prometheus seems to have left audiences disappointed and it is easy to see why. It is a gritty and dark film but it is hard to follow and keep up with. It is also hard to understand whether or not this is or is not a prequel to Alien as it seems Ridley Scott isn’t 100% sure himself either. It seems as if Prometheus is trying to be this generations Alien and it really just doesn’t stand up to the original. If you are a sci-fi fan or a Ridley Scott fan then you may enjoy this film, but if not then I wouldn’t rush to see it.