REVIEW: Snow White And The Huntsman 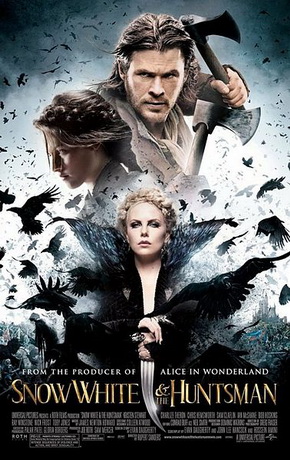 Dripping with gothic imagery, Rupert Sanders take on the classic tale is beautiful, but not the fairest of them all.

In 2011, Universal Pictures announced the production of a revamped version of the 1812 fairy tale ‘Snow White’. One year later, at an astronomical budget of $170,000,000, the finished product has been released. Dark, crisp, and haunting, it bears little resemblance to Disney’s merry take on the tale.

The story begins by illustrating the birth of Snow White (Kristen Stewart). With lips red as blood, skin white as snow, and hair black as a raven’s wing, she is the most beautiful girl in the kingdom. However, with the death of her mother, Snow White’s father falls in love with the evil sorceress Ravenna (Charlize Theron), who murders him on their wedding night. Her dark army storm the castle, and Snow White is held hostage. Ravenna starts to capture women whose beauty may surpass her own, draining their youth in order keep hers.

Years later as a young woman, Snow White escapes her imprisonment. Ravenna sends a huntsman (Chris Hemsworth) to track her down. However, he falls in love with Snow, and a love triangle forms between her, the huntsman, and her childhood friend William (Sam Claflin). The story follows their fluctuating relationship, as they unite to overturn the Queen and reclaim the castle.

As a film, Snow White and The Huntsman is a visual delight. Its dark and beautiful imagery is perhaps reminiscent of the later Harry Potter films, and Tim Burton’s adaptation of Alice In Wonderland. It pairs perfectly with Charlize Theron’s beautiful yet sinister character Ravenna, the highlight of a generally well-acted film.

Another highlight is the dwarves, although unnecessarily, there are eight rather than seven. Their gang include a digitally shrunken Ray Winstone and Nick Frost, whose laddish manner provides light humour to break up the melodramatic plot.

At 127 minutes long, Snow White would benefit from being shorter, avoiding periods of stagnation within the plot. The imagery may be visually stunning, yet becomes samey when pressed on the audience for over two hours. Character relationships between Snow White, The Huntsman, and William could also be further developed, adding another layer to the plot. William announces that he ‘won’t leave Snow behind a second time’, yet stands back sheepishly as she chooses The Huntsman. A more powerful love story would give the film greater appeal to the tween market, who appreciated the eternal love seen in films such as Stewart’s previous outing The Twilight Saga.

It amounts to a film that falls slightly short of glory. The visual imagery is breath-taking, however is over-emphasised, submerging the romantic and humorous elements of the film in darkness. Snow White, The Huntsman, and William’s relationship needed more attention to thrive, and the dwarves deserved a more prominent role. What Snow White and The Huntsman has in imagery, it lacks in heart.