Go to death and go to satire: The importance of staging Earnest, Sherlock Holmes, Dr Faustus and the Pirates of Penzance 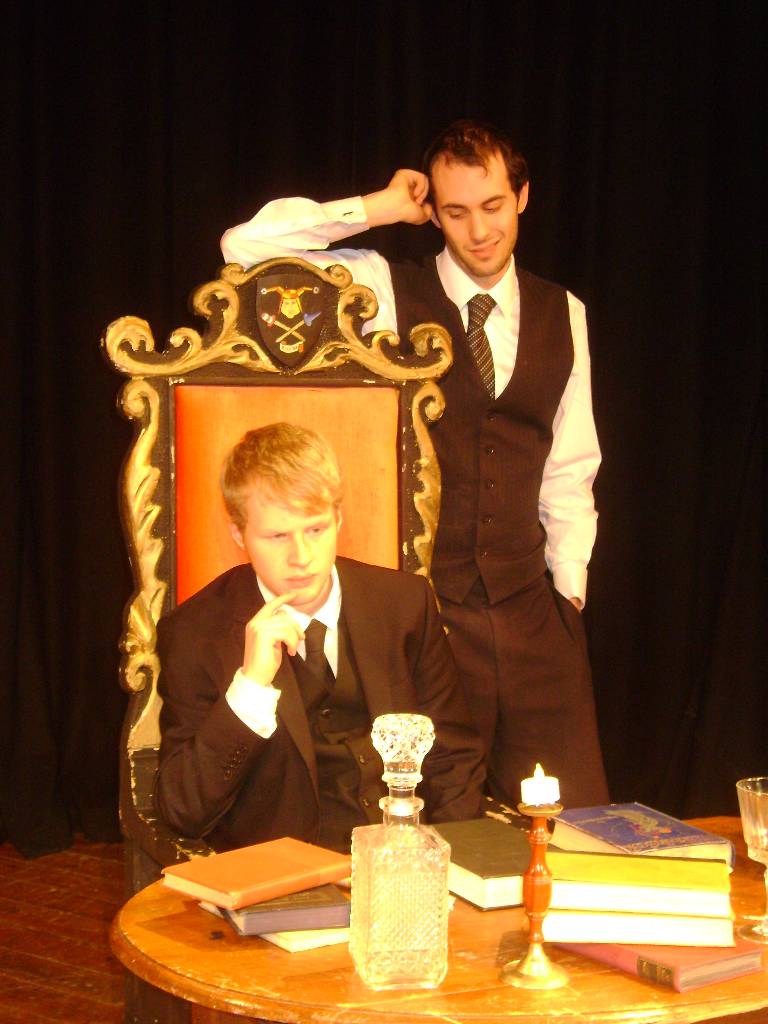 It’s never easy staging a well known play that everybody knows backwards and can quote verbatim, as I discovered when treading the boards in 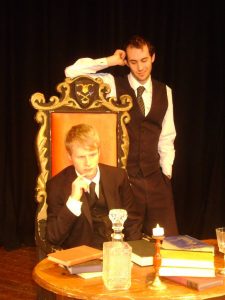 Blackadder in my Rostra days. From January to March (2012), both BEDS (Bangor English Drama Society) and Rostra performed four productions native to the British Isles (a term that includes Ireland) and firmly engrained on our British psyche. The curtain went up on Irishman Oscar Wilde’s The Importance of Being Earnest and Edinburgh’s Sir Arthur Conan Doyle’s Sherlock Holmes. The Pirates of Penzance by Victorian Londoners Gilbert and Sullivan and The Tragical History of Dr Faustus by Christopher Marlowe, who “iiiiiiiiiiiis an Englishman!”-just keeping up the Gilbert and Sullivan theme- also formed the viewing programme. Both groups managed to put their own stamp on these classics by adapting them slightly to their own style.

Rostra’s warm and jovial production of The Importance of Being Earnest set in an 1895 London mansion house made the audience feel involved with the action, either indoors with the butler or in the stately gardens with Cecily. The classic line “In a handbag”, more recently associated with Dame Judy Dench, was delivered effortlessly by Josie Whyatt whose ‘cover version’ of the outburst was made truly her own, delivered with more irritation than surprise.

Matt Heslop, Sally Higgins and Ambles Hubbard directed the BEDS Sherlock Holmes adaptation, 221B, which included some of Conan Doyle’s stories in full and others in part. An interlude playfully depicted the substance-abusing London detective highly intoxicated and on the verge of a discovery whilst also in a state of apparent simultaneous irritation, inspiration and relaxation.  The opening part from A case of Mistaken Identity opened the second half and was an extremely faithful visual representation of Conan Doyle’s words, with the lines from the story resonating heavily through the cast’s speech and actions like an aftershock for anyone who has read it. Silver Blaze and The Greek Interpreter also formed the programme and were performed in full. In the former, BEDS put their own slant on the London classic when Colonel Ross became ‘Welsh-ified’ into Colonel Rhys and was played to perfection by Tud Jones. In the latter, Daniel Short played baddie Wilson Kemp with glint of venom in his ocular and an evil laugh in his voice as he taunted his victim.

OH! Wasnt that the most hilarious misunderstanding?! 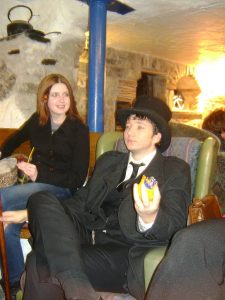 An Evening of the Arts, organised by Bex Phillips and Abigail Gregory, saw an abridged and jape-filled adaptation of Gilbert and Sullivan’s The Pirates of Penzance. Joshua Pink directed and narrated the piece that displayed a healthy dose of Impsoc’s own brand of spontaneous humour and was punctuated with jokes firmly aimed at the kings of plot twists. This comic send-up, featuring more parody than you can shake a deliberately awful prop at, was tailor-made for anyone who has ever rehearsed (or suffered) at length any Gilbert and Sullivan.

BEDS and Rostra also showed off their darker sides with some eerie and sinister dramas. Rostra ambitiously staged The Tragical History of Dr Faustus, directed by Ceri Roberts and Sara Burgess, in which the title character (played by Chris Davies) makes a pact with Lucifer for twenty-four years of servitude from Mephistophilis. The directors chose to have each of the seven deadly sins personified in a character baring that sin’s name, who all enjoy torturing Dr Faustus in a scene that effectively portrayed him descending into a madness constructed from his own lust for power and knowledge.

BEDS put on a Murder Mystery Evening in and around JP Hall, set at the funeral of the deceased leader of a fictional nation. It is not long into the service before a furore erupts and accusations are flying left, right and centre as to who is responsible for his death. BEDS added an extra layer to thicken the plot: Between the staged action, there were two interludes of audience interaction. Rather than having the information relevant to the play presented to the audience through a staged script, the viewers went looking for it! During these interludes, the characters all dispersed, meaning the viewers were able to ‘eavesdrop’ on seemingly private conversations between them and, in the labyrinth style, pose questions to them directly. Not only did this give the audience the opportunity to discover the identity of the killer by uncovering the secrets a set script may conceal, it also let them put BEDS’ method acting to the test. Some of the ‘overheard’ exchanges were hard-hitting, others atmospheric and mournful, but each of them convincingly tense. The action unfolded around the audience as the drama escalated and more truths were revealed. The Whodunit is a classic British favourite, and with this set up BEDS added an extra layer of curiosity to it.

So whether BEDS and Rostra have taken you to Penzance, nineteenth-century London or a giant Cleudo? board this semester, they have certainly been working hard. And, as Gilbert and Sullivan would sing, “it’s greatly to their credit”.