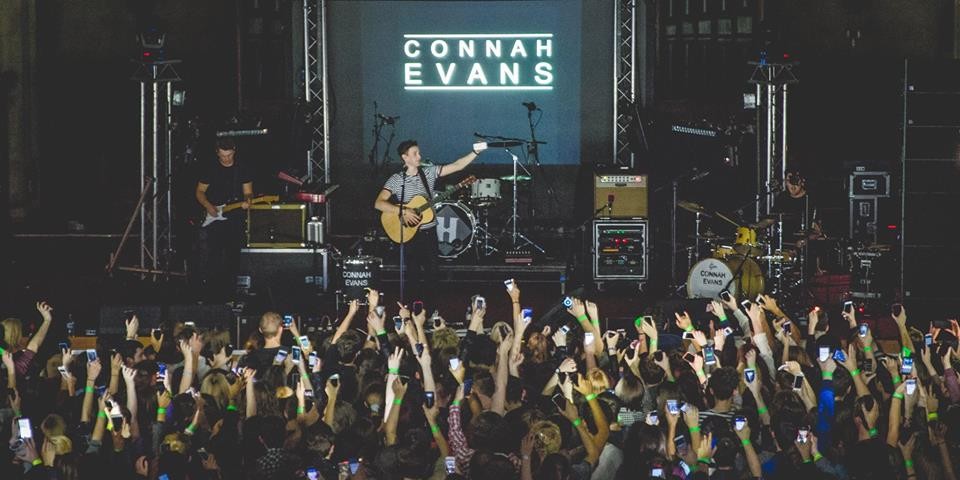 Sunday evening, Ffriddoedd village. Music resonates around one of the many building of the student accommodation. Students are staying in their  room but, as the singer begins to sing, some of them, out of curiosity, decide to leave their room to follow the sound and figure out what is going on.

Surprisingly enough, they will end up in a small, over-crowded kitchen. In between the Christmassy decoration and the dishes laying around, there is a guy with his guitar only. The dozen of people seated are enthusiastically moving their heads as if they knew the song already. Some clap, some even sing along.

The singer looks like a typical British pop singer, with his black necklace and slim jeans. His voice is powerful and the song he performs -which is his- sound like something you have heard on the radio. Actually, maybe you have heard it on the radio. If you are listening to BBC Wales, it is quite likely.

In between two songs, he will let you know his music is available on Spotify, YouTube and Itunes. And there is your chance to know : who is this local rising star ?

If you were there to his previous concerts in the Acapela, in St-Mary’s, or in PJ hall before the Hoosiers’ concert, you would have known thanks to the writings on the drums. But tonight he is playing the ‘acoustic’ version and you have no clue. Nevertheless, there is no chance you ignore his name any longer (and you better remember it) : he is called Connah Evans.

With such a name, even if he wanted to, he couldn’t deny his Welsh origins. Though he was born in England, he moved in Anglesey at one and never really left.

“I was studying drums in the Beatles’ school in Liverpool, but I didn’t like the city too much and leaft after four weeks. I knew what I wanted to do was singing”, he said.

This experience inspired him one of his most popular song among students. It is called “In the city”. It describes how lost he was in a big city and how he felt he had something to prove.

This is maybe what motivated his radical decision : he left his school and came back to Wales. He had set his mind on what he wanted to be -a professional singer- and committed to his goal 100%.

“If you ask me to want to go on the moon or play a show, I would say play a show. Nothing would stop me from playing a show. This is my passion, what I want to do.”

He began by singing alone. He met Callum and Leo, two musicians who are accompanying him during the concert and manage to have a full-time job, at a festival. The drums and the bass gave a new dimension to his songs, allowing him to have more opportunities of gigs.

He played around North Wales and, more recently, for Bangor university’s students in a former chapel. He was also pre-singer when the Hoosiers gave a concert in Bangor. His best experience so far :

“It was amazing to play there, I never played for an audience that big before. I realized this is what I want to do forever ! When everybody took their phones out, it was crazy. And when everybody was singing along “Ocean” chorus, I almost felt like crying !”

After the Hoosiers’ gig, he was asked to perform in students accommodations :

“People came to me : ‘come play in our flat’. The first time, there was not many people but the second time, the number doubled. So I would like to do it again and again.

“There a not a lot of opportunities here in Bangor apart from that but it is better in a way. If I was in London noticed straight-away that would not be good for me, I like that my career starts from nothing and grows step by step. I’ll know what it worth to be ‘on top’ and I won’t take for I have for granted. That’s what I like about living here.”

He describes his style as ‘different’ : “I’m a soloist with a band. I mix different styles.” His recorded songs are definitely pop but when accompanied with drums and bass it has something of indie rock.

Different is also his answer to the question “why do you want to be a singer”. Instead of the expected “I loved singing since I was two”, he bluntly says he likes showing off !

“When I was in primary school, I liked to be in schools plays, things like that. I tried singing and people said I was not too bad so I carried on. I’m more about the entertainment part than the singing.”

Playing for Bangor University students is actually a golden opportunity for him : he can reach people that come from different countries and with different music culture. He can “test” his songs on them and hope to share his videos with people all around the world.

“Playing for students is a good way to have a new fan base, because the students are all from different countries or different part of the UK. I can reach all these places from one room ! ”

Indeed, when asked international students are enthusiastic about his music :

“Connah Evans is one of those singers, whom, the very moment your hear their voice, you want to listen to the lyrics of the songs. His guitarist and drummer make the music even better. I don’t know if in 10 years he’ll be a big star but I think more people will know who he is, especially young people. He’s a singer for students because people close to his age can relate to his songs. And I think he knows that and that’s why he plays usually in pubs or student flats”, says Elodie Papin, 20, French international student.

“When I listened Connah Evans’ songs at other person’s flat, I was really surprised at his voice! I really liked it, so I wanted others to hear his songs as well! I’m pretty sure that other people will love his voice. After his show, I could see that most of them was really satisfied with the performance. Whenever I listen to his songs, I sing along the chorus, especially the song of ‘Ocean’. His song is easy to sing along even to foreigners ! Now I’m a big fan of him.”

Future seems brilliant for this young singer. In addition to the students’ flat performances, he was chose by the BBC to be ‘introduced’ and will travel for the “Wait For Me Tour” around the UK … and maybe further away ?

Book your place for his single launch party in the Feral Cat, the 26th of February, here .