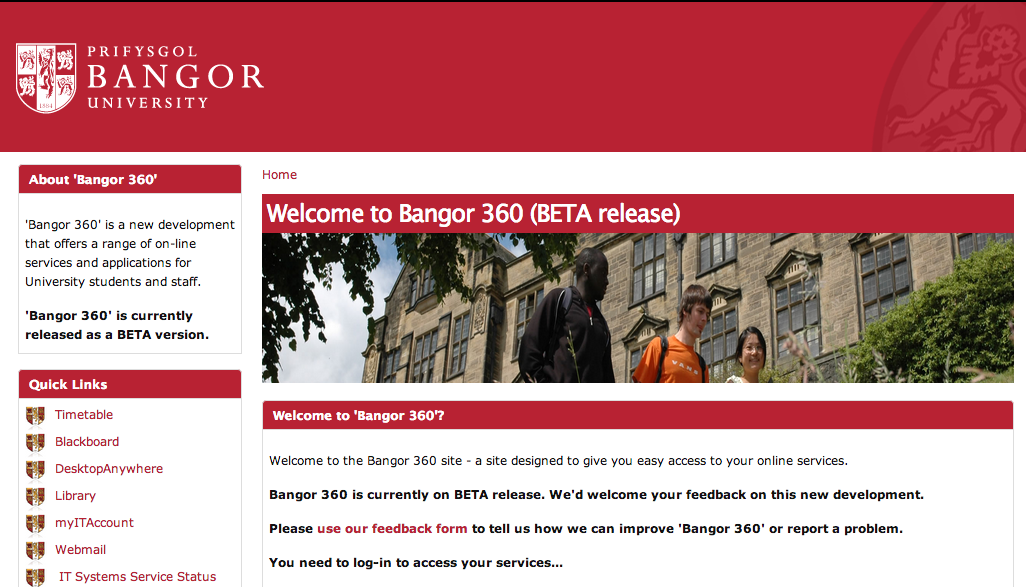 Have you heard of Bangor 360? Don’t worry if you haven’t because you certainly aren’t the only one.

Recently IT Services at the university began rolling out a new online intranet system: Bangor 360. The basic idea of 360 is that it will be a single platform for both students and staff at the university to be able to access all of the information that they may require. It would transform all of the current sites we use, such as Blackboard and Bangor portal, into one easy to use site.

Still in its Beta stage, 360 has yet to meet these needs..

The main problems at this point are the design interface and the multiple logins that are required to access anything ever. The design is very similar to that of Bangor Portal and is in all honesty, boring. Looking this way makes it difficult to use, and for something that is going to be needed by so many people needs to be user friendly. There is a lot of text on the screen which makes it very difficult to find the things you want, even if they are supposed to be quick links.

Multiple logins were plaguing the service, with almost every link that you clicked on requiring yet another. While this issue should have taken a long time, as a lot of the systems the university currently use are not directly compatible with 360, it appears to have already been resolved. In fact, in my test run of 360 whilst writing this article I have only had to login one time. It is things like this that give me the confidence to say that Bangor’s IT Services can deliver, we just need to be patient.

Bangor 360 is currently running a feedback option where any user, staff or student, can send a message directly to those responsible and let them know of any problems that they may have encountered, give suggestions or even just provide some general feedback. At the moment, in its Beta stage, this feedback option is probably the most important part of Bangor 360. With such a large and diverse range of people in Bangor it is important that IT Services know what they need to do to cater to everyone.

360 was tested last year in a small number of schools, such as Psychology and Business, which helped them to get rid of most of the flaws before they made it available to the entire university.

Prior to these stages, IT Services invited a group of students to a focus group to get an idea of what features students wanted. The group came up with a wide range of suggestions and its good to see a few of them have been implemented. However, for a good percentage of that feedback to be put to use, a lot more needs to be done with the service.

If Bangor 360 is to incorporate all of the university’s current online services then why not go one step further and give students everything they could need? A lot of the suggestions were like this, giving new services that would make sense to be online such as maps to lecture rooms, an option for dissertation binding and printing as well as contacts for wardens and peer guides. The feedback also suggested that the design of the interface needed to be user friendly, something that has yet to happen, and that a customisable homepage would be useful to cater to all students.

Bangor 360 isn’t all bad. At the end of the day it is evidence that problems have already been identified by IT Services and they are trying to give students what we need. One of the most important parts of 360’s development right now is user input. Us students, and staff, need to let IT Services know what problems we’re facing and what can improve.

I am confident that Bangor 360 will not be just an unsatisfactory piece of technology like the similarly named XBox 360, and that it will actually become a positive and invaluable tool to students and staff alike.