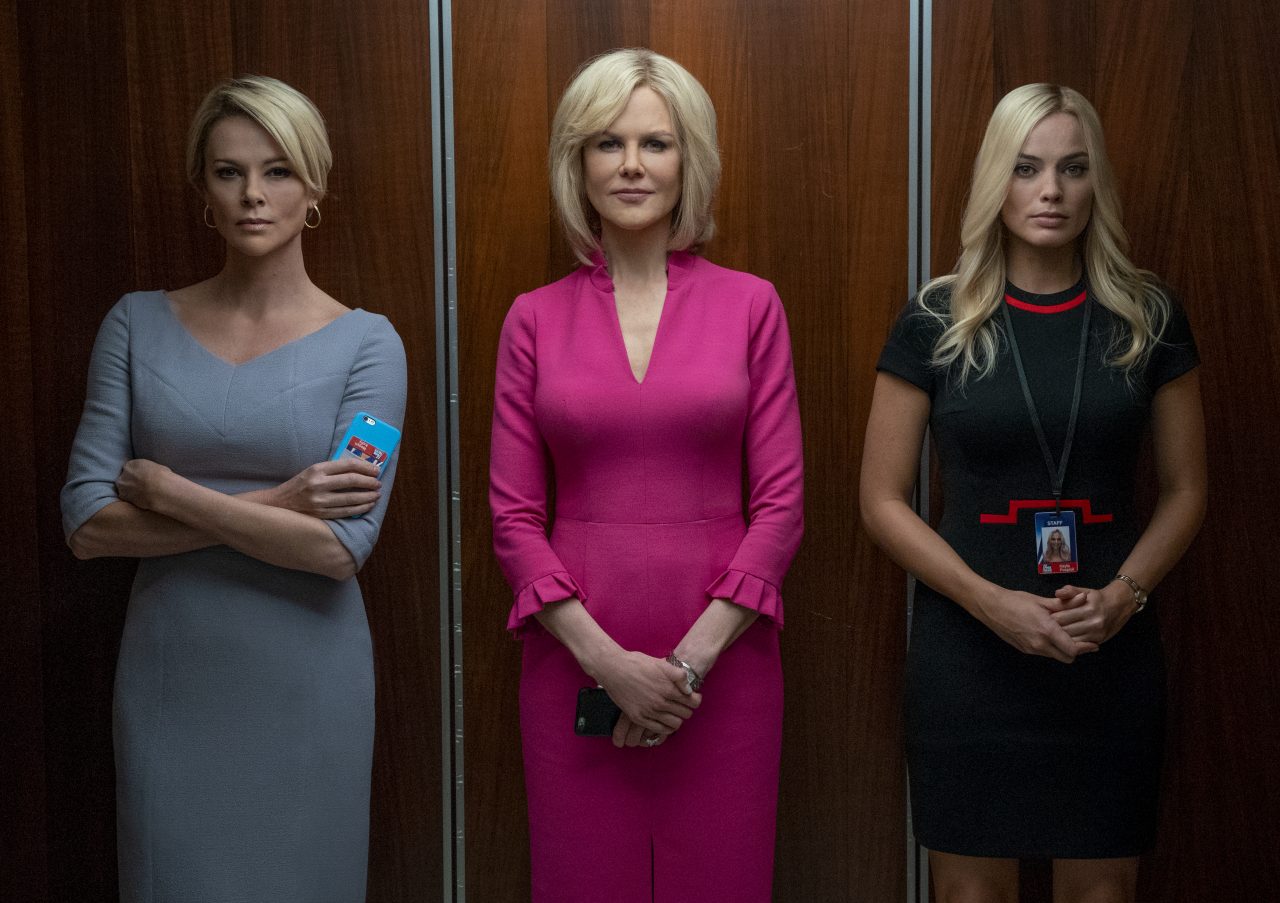 Cons: Story felt rushed, and weakened the tone at times.

Just like the previously discussed Dark Waters, Bombshell dramatizes a true story of scandal and horror which affected the lives of multiple people for decades. Based on the accounts of the Fox News female employees who sued CEO Roger Ailes for sexual harassment in the mid 2010’s, the film largely follows three main characters as they face their own individual struggles around the same injustice.

Bombshell is directed by Jay Roach who came from a background in comedy, with the likes of Meet the Parents and the Austin Powers trilogy in his filmography. It is therefore somewhat of a surprise to see him sink his teeth into such a weighty dramatic topic, but I am pleased to say he has largely succeeded. His transition is similar to that of Adam McKay, who moved from wacky comedies to making The Big Short; and like that film, Bombshell has an unorthodox style to it. The film opens with Charlize Theron’s character essentially breaking the fourth wall to quickly bring the audience up to speed with the situation and the characters involved, which felt very similar to the technique used in the Big Short, and as a result I think this film owes it a great debt.

Unfortunately Bombshell isn’t quite there in terms of the dramatic gravitas, throughout watching it I always felt like the film was just beginning to scratch the surface of the horror of the situation, and slightly pulled its punches in the message it was trying to portray. I also felt like parts of the story seemed rushed, and almost felt as if the film could have benefitted from being an extra 20 to 30 minutes longer. Having said that there were some fantastic scenes where you really felt the emotional torture that these women went through, there is one in particular between Theron and Margot Robbie which is incredibly powerful. The film also does a particularly good job at demonstrating the division within the Fox company that this scandal caused, and by using the backdrop of the divided American Presidential campaign of the same time, it better demonstrates this turmoil. Moreover this relates to the inner turmoil that the characters themselves are experiencing as they struggle over what to do in this situation, as one wrong decision could destroy their lives. This aspect of the film is brilliant and you have to give Roach credit for the way he portrayed it. One other aspect that is incredible is the hair and makeup (for which it won the Oscar), all the characters in the film look the spitting image of their real-life counterparts. They also successfully show the actors through different time periods without digital trickery and it really is an exceptional triumph in that department.

This brings us nicely to the characters themselves, whose portrayals are arguably the most valuable pieces of this film; they are what really elevate it from a mediocre film to a great one. Starting off with the two Oscar nominees, Charlize Theron playing Megyn Kelly and Margot Robbie playing a fictional character based on real accounts. Robbie especially was top notch, as her character is the one we see experiencing these terrible events firsthand. She is responsible for some of the films most emotionally captivating moments, and you see her unravel as she gets sucked in deeper and deeper throughout the story. Theron similarly is exceptional as the main lead of the film; her portrayal of Kelly is fantastic because when I went back to watch news clips of the real-life woman they seem almost identical in look and manner. Moreover, the film is really framed from her point of view as she sees both sides of the split within the company, and whichever way she chooses will have a massive impact on herself and those she knows. The third major character is Gretchen Carlson (the woman who first sued Ailes) and she is portrayed fantastically as well by Nicole Kidman, similarly to Theron she completely transforms into her character and you really feel the pain that she went through to get the ball rolling in bringing down her boss. Finally, I’ll give a shout out to the villain of the piece phenomenally and scarily brought to life by the always outstanding John Lithgow, he really is a chameleon actor and has once again transformed himself into this deplorable dictatorial figure controlling his empire. He really does a great job as an overpowering villainous figure, and his performance helps you connect with the struggles of his victims and lends understanding to how this was able to happen for so long.

Overall, I think Bombshell is a quality film, but it could have been so much more. It has all the elements in place but just doesn’t quite use them to their full potential, and as a result it doesn’t quite cement itself as one of the best films of 2019. Therefore, I will give it a score of 7.5/10.